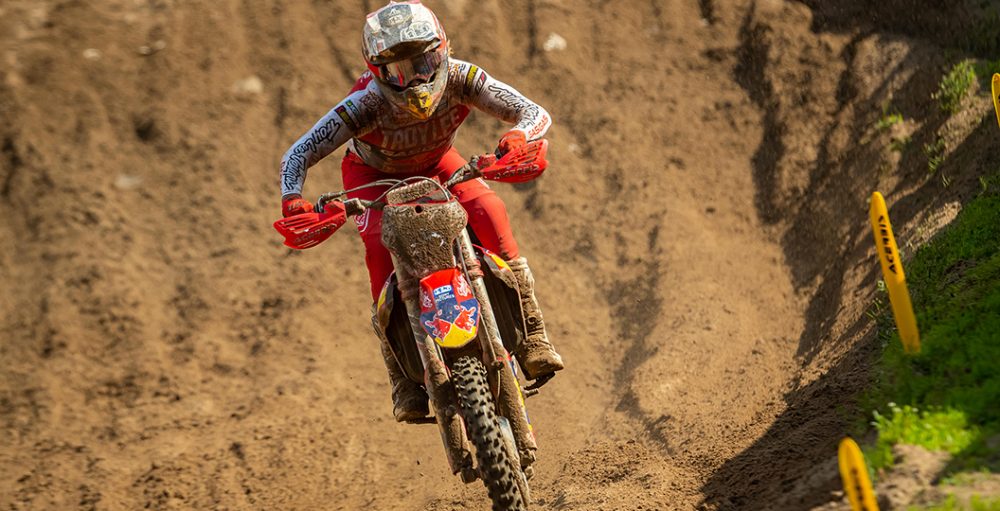 Red Bull Troy Lee Designs GASGAS Factory Racing’s Justin Barcia broke through somewhat at the fifth round of 2021 Lucas Oil Pro Motocross, Southwick, as he landed on the overall podium via 2-4 moto scores. Multiple set-up changes, prompted after some wayward results at both High Point and RedBud, led to that success; he was expecting to be in this position much sooner.

Barcia dissected his results and the changes to his programme in the post-race press conference on Saturday night following Southwick. There is a lot of talk about the bike changes, as well as the addition of Wil Hahn to his programme. Hahn left Monster Energy Star Racing Yamaha prior to RedBud and joined Barcia on a full-time basis. Post-race comments are available below.

MX Vice: What are the vibes like at Southwick? Was that a part of the effort to get on the podium today or was this just due regardless of the track?

Justin Barcia: Yeah, for sure. I get a really good vibe at Southwick. Honestly, I expected this to happen last week and it just wasn’t meant to be. We weren’t ready for that, I guess? I definitely enjoy the fans there and they cheer me on hard. We had whole new settings this week and the bike worked really good – I felt really good. It all worked well together. I was happy. I love this track and the fans, so that does not hurt anything [laughs].

I want to talk about Wil Hahn – he is new to the team and from what I understand he is someone who you have been pushing to get. Talk about what he has doing for you and how it has been going.

It has been really good so far. Wil is awesome. We were teammates back in the day and I always enjoyed being around him. I knew that he probably did not really want to move to Florida – he has a family in California and stuff. I saw that opportunity. I know TK [Tyler Keefe] has always wanted him, so I went after him first. I was like, “You have got to do it! You have got to do it!” It was definitely a work in progress but I’m stoked to have him. Anyone who knows Wil knows he is a great guy and it has been really positive so far. Two weekends on and I am enjoying it. It is nice to have a guy who has experienced the ups and downs of the sport.

You are still on a relatively new team in Red Bull Troy Lee Designs GASGAS Factory Racing, so I know you are still figuring things out with the bike. You improved this weekend. What have you learnt over the last few weeks and what do you need to make better?

It is definitely a learning process. I love the bike and I enjoy it, but it is a lot different to what I have been used to the last few years. It is really good to have the big umbrella of KTM, Husqvarna and GASGAS. All of the guys in Europe racing as well. I built my own setting and was happy with it in the beginning of the season, then we got on the east-coast tracks and we were searching. We could not really figure it out. We were working really hard and then we looked at some stuff, so we made a decision on what we needed to do this week. It was obviously the right decision! It is like anything. A new job or new whatever is a learning process. I am still really happy with the team.

I was going to ask if anything was different coming into this weekend and you mentioned bike changes. Is there anything specific that you can point to or is it just trying different settings here and there? Can you go into detail with that a little bit?

Yeah, sure! Why not? Fork, shock and a link. It was quite different. I was obviously really struggling the last few weeks. Everyone has been struggling a bit, like Cooper [Webb] a little and Marvin [Musquin] maybe a little. They seemed like they were a little better this weekend. I am not sure what they are on – I don’t really keep up to date with that. For me though, I am super stoked on the direction we went and everyone working together. I am super happy with the changes. Yeah, it is super good.

You really needed to make up two positions at one point in that second moto to get on the podium. Did you know that or were you just racing for whatever position you could get? It really looked like you dug deep.

Yeah, I was definitely super disappointed about the start. It was a decent start – I was near the top five. It was salvageable. I could do work from there. I got absolutely annihilated by another rider. I would have done the same thing back in the day but now I am like, “That was stupid!” I was so mad. I ended up passing the dude and smoking him, so it is whatever. I do not need to say names. It was good. I went full beast mode. I got stuck behind Christian [Craig] for quite a while – he was riding good and I could not get around him. I finally made the pass happen and then I saw Marv and Coop in front of me, which was like blood in the water. I wanted it bad. I never knew anything about the overall. I was just going as far as I could in the amount of time that I had. I made some really good passes and was definitely gelling with the bike in that second moto. I just wish I could have got a start. It is what it is.

We know the vibe with yourself and the TLD team has been such a positive one ever since you joined. Have there been any ups or downs since you joined the team? Just how important was it for you to get back on this podium?

Yeah, absolutely. Racing is super difficult. There is a lot of competition right now. Supercross was good – we were happy and learned. It is what it is, supercross. We wanted to be competitive moving into outdoors and the last few weeks have definitely been hard. Everyone has put their heads down and worked super hard together. From my side, it seems like the team really believes in me and what I do. They know that I always give 100% and work super hard. I think everyone is super happy and I do not think that will really change – we have a good atmosphere over there, especially after bringing Wil on. It has been extremely enjoyable and I am loving it. Hopefully I get to finish out my career there.

Is there anything specific that Wil brings to the table that you were looking to have? You mentioned that you were chasing him as soon as you knew he was available.

Wil brings a great atmosphere. I have not had a trainer for a little over a year now. I am old enough and smart enough to know what I need to do, but it is really nice to have someone who you know you are going to gel with. The guy has been around a long time and racing – we have raced together and were teammates back in the day. I knew Wil would bring a really good vibe to the team and that is already what he is doing, which is great. I knew he would be really great with the training stuff. We are learning certain things together still. It’s only been two weeks, but I just think that turning around from last week to this week is already… This is going to be good. I think it is only going to get better from here. I’m looking forward to the off-season with Wil, training and doing all that stuff. It is just good vibes with a guy who knows a lot. I think that he gets a little underrated, with all of the stuff that he did at Star. That is just my opinion. I think that he will do great stuff here.

When you passed Adam Cianciarulo, in moto two, he was dragging anchor a little bit and I think that he had some arm pump. You still took him really wide. Talk about that pass!

You think that was the guy who smashed me in the first turn or no? I think that I was actually really, really nice. That is not my issue that he was dropping anchor.