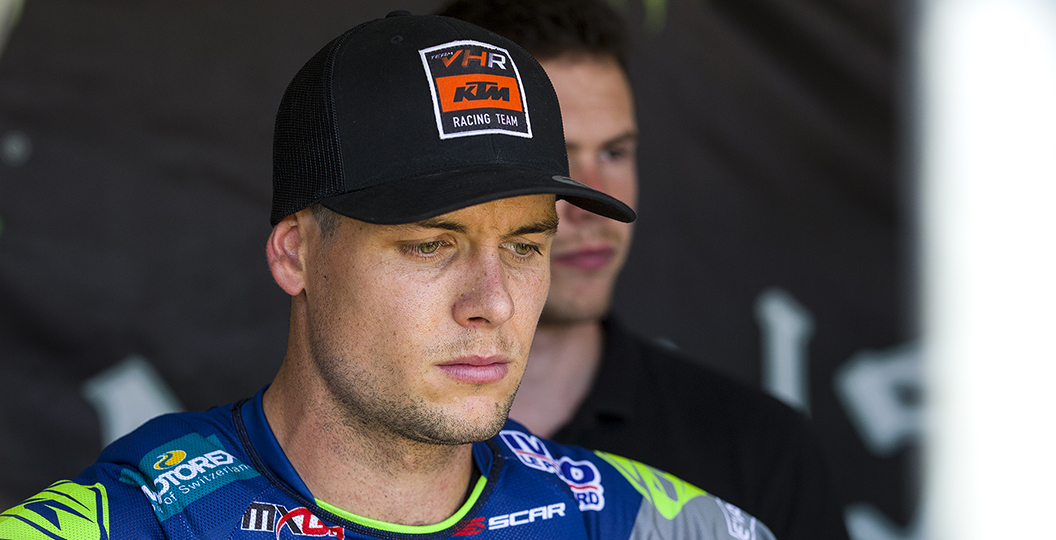 Jordi Tixier has hogged headlines in the last eighteen months, but not exactly for positive reasons. Splitting from both the BOS and VHR teams put a cloud of negativity over him. Tixier has never spoken out and explained his side of the story though, until now that is. Following a recent split with the VHR team – the outfit that picked him up after he parted ways with BOS – Tixier is paving his own way in the sport and reveals all in this exclusive MX Vice interview. It is finally time for his side of the story.

MX Vice: How did the split from the VHR KTM team come about? It all happened very quickly in the end, but what went on from your side?

Jordi Tixier: We felt some jealous things coming from Bruno Verhaeghe, the owner of VHR KTM. I am the type of rider who helps the people to improve. Bruno didn’t have many things in the team and asked me if I could help him get a helmet sponsor, goggle sponsor and boot sponsor. I brought some money to the team with my personal sponsors and good things too. My goal was just to improve with them and finish my career there. My mechanic left at the end of last year, because Bruno had no respect for him. I had a really good relationship with him – I really trusted him.

I asked Bruno what we were going to do and he said, “Oh, we can find a mechanic like him easily.” I gave him like two weeks to see what he could find, but after two weeks I called him again and he just wasn’t answering. I just tried to call and thought that maybe we could make an appointment to speak about it, but he was not answering. This was three weeks before the first MXGP. That made it really difficult to improve! I just sent him a final message like, “My Dad will do the job and check the bike, then as soon as you have found a trustworthy mechanic we can put the bike in your workshop.”

Bruno did not agree with that and then we split. Without any mechanics in the workshop how would it have been possible for someone to prepare my bike? The bad thing is that I never did something bad about him – he just made interviews saying that I was not a good guy and was making bullshit within the team. This was not correct from his side. I felt like Bruno was becoming strange with me and my Dad all year long, so it was better we split and started to look for a new story.

This is kind of what I take from this. You have been on the best teams, so you know what you want and what you need these smaller teams to be like. You just want to make the situation the best it can be for yourself, which no one can blame you for.

Yeah exactly! You are completely correct. I worked with KTM and I think, from my side, it was the best team. I learnt a lot from Stefan Everts and the team. I think that for VHR it was a good opportunity to have me to try to improve everything in the team, which is what I tried to do. I think that Bruno didn’t like it, because he felt like it was not his team anymore and that it was my team.

I always told him that the only reason I was doing it was because I liked him – I did not need people to say that it was VHR the team of Jordi Tixier. I did not need that. Bruno did not want to listen to me, which was his problem and now I am just looking forward to the future. It will be a new story.

With everything that has happened with BOS and VHR, I think it shows how keen you are to keep racing at the highest level. You have had a rough couple of years and would not put yourself through all of this if you did not want to be out there, right?

Yeah, I’m someone who always works hard. The last two years were bad moments of my career, but that has not put me down. I have good family around me, and my girlfriend always pushes me up. I just try to look forward all of the time. Those last two stories were bad, but I think that I have learnt a lot in that time. That means that I will not make the same mistakes in the future and it will all be much better.

One thing that I have always wondered is how tight your link with KTM is. You have bounced around different KTM teams, so are Austria involved with some kind of support?

You know, I was pretty happy about it when they signed me in 2012. That was a dream come true and then I became the world champion with them in 2014, plus I won the Motocross of Nations with them in 2018. I have always been close with KTM. I have a good relationship with Pit Beirer, Robert Jonas and even Diego Clement now. I have always said that KTM is the manufacturer I want to use – I feel the best on their bike and my relationship is good with them. If I can finish my career with KTM then it would be a real pleasure for me.

It’s not like you are tied to KTM then. You could have gone to a different manufacturer these last couple of years, but you just knew that you wanted to be on a KTM? Simple!

Yeah, exactly. I just want to be on a KTM, because for me it is the best bike. The relationship that I have with them is always good and they have always helped me to have the bikes and parts I need to race in MXGP. I really thank them for that and hope that I can continue riding for them.

The latest deal that came up was the one with Sarholz KTM. I was surprised that you got on an established team like that, because you split from VHR quite late and there were obviously not any seats available. How did that all come about?

I already had a good relationship with Sarholz. I did some ADAC races for them and I had a good relationship with the owner of the team, so I asked him if we could find a deal for a ride. The deal that we did was quite easy – we are going to do the German championship together and maybe the supercross in Germany. It was a bit difficult for them to give me the money that I need to ride on top in MXGP, so I decided to do something different.

Yeah, so this is the thing that no one really knows. You have started your own MXGP team, which makes sense. You know what you need, like we said above, so you may as well sort it out for yourself.

Yeah, exactly. The last two stories have been bad, and I was thinking a lot about whether I should stop doing MXGP or keep going. I am a guy who does not want to have any regrets, so I think that I just need to do it on my own to make sure that everything is at 100%. Building my own team was something that my Dad and I have been thinking about for a few years now, and I think that now is the good time to do it.

We have both been working hard the last couple of weeks to sort it all out. Now that everything is ready, we are very excited to start this new adventure. The goal for 2020 was to do MXGP and the French series, then the ADAC series with Sarholz. My whole goal for 2021 is to take an EMX125 rider and help him with what I have learnt in my career. Putting him at the front in EMX125 would be our goal.

Shaun Simpson and Kevin Strijbos had a whole off-season to figure out their own team, but you did yours quite late. Is budget going to be a problem? Can you make it to every MXGP round?

We do not know if we are going to do the overseas rounds or not, but we will do all of the European rounds. I have some personal sponsors who have been helping me for many years now and this would not be possible without them. I want to thank them for that, because they gave me the opportunity to build my own team and do a whole MXGP season. We are ready and very excited to get back behind the gate.

I guess this is it for the rest of your career now, huh? You will not be talking to other teams. Unless something amazing comes up, you will stick with your own team and build for the future.

Yeah, exactly. I think that now I know what I want. If a factory team like KTM, Kawasaki or Yamaha offers me something then for sure I would go for them [laughs]. If I have to ride for one of the B teams then I would keep my own team, because I will feel so much better in my head and then ride even better. That is what I want.

I think people forget that you are only 27 as well, so you have a lot of years left in the sport and are not even really beyond your peak yet. What do you think you can do in the right situation?

Yeah, I am only 27. I think that is quite young – you see the riders riding quite late now. My speed is still pretty good as well. I still need to make sure that my head is clear, because the last couple of years have been tough. That is the most important thing. I need to be 100% in my head at this level, and so does the bike.

You can do some good results like that. My goal is to just get back to my best level. I think I am getting better and better now, because my head is 100%. I think that being close to the top eight every weekend would be pretty good. Let’s see if we can do even better than that, but the level is really high. Top eight would be awesome.

Do you think that you are a little underrated in the paddock and that people forget you are a world champion? I feel like people forget about how good you were when things were going right.

Yeah, maybe. It is always the same in this sport though. Everyone is behind you when you are on top, and then when you are down everyone forgets you. It is pretty difficult. I think that I am just getting stronger though and doing it by myself – the world title is here. No one can take that away. I have it and I am a three-time world champ. I am an MX2 world champ, MXoN world champ and a junior world champ. I think that is pretty good, so people can think what they want. I am someone who works hard. Maybe they do forget a bit?