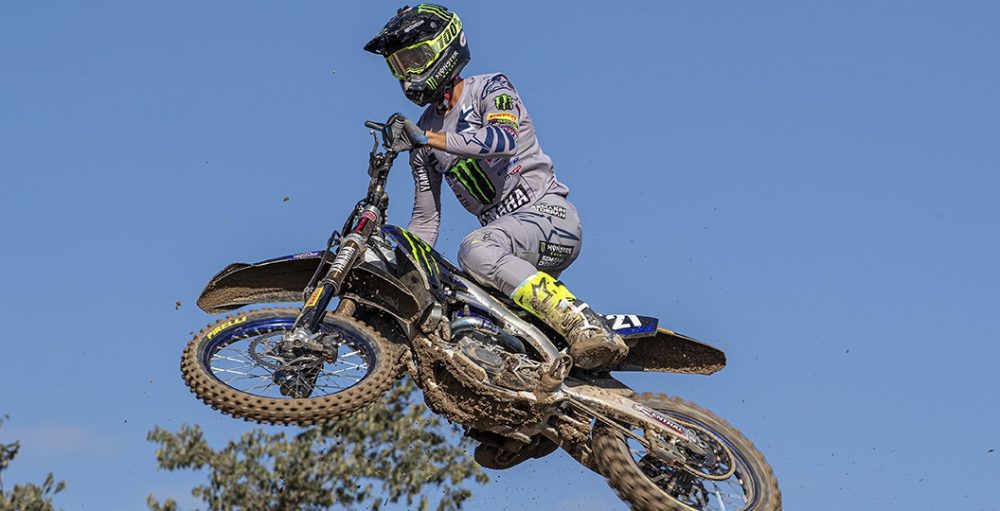 Gautier Paulin has finished inside of the top five just once since the Grand Prix contingent returned to racing over in Latvia, which obviously does not look incredible on paper. The reality is that he has been riding so much better than though, which is discussed at length in this MX Vice interview from the Grand Prix of Lombardia. Paulin talks about the frustration, as well as the many positives, and also touches on what’s to come in 2021. All reports indicate that he will not return to Monster Energy Yamaha Factory MXGP.

MX Vice: A decent day for you, but I’ve been wanting to talk to you since Faenza 1 really. I’d imagine you are quite frustrated with your results lately, because it has not really come together. Your riding is, I feel, maybe back to the best Gautier from a few years ago, the KRT days or whenever that was. Again, people at home may not have noticed just by looking at the results. There’s been a lot of positives lately. I would imagine that you have got to be happy, from a riding point of view.

Gautier Paulin: It was a challenge mentally and body-wise. Latvia, coming back from quarantine, I had this winter preparation like all the GP athletes and then I broke my finger in Latvia. It was a headache to just ride like this in Latvia. I came to Faenza ready, and had a huge crash that put me really in a bad shape body-wise. I was really struggling with my back and my neck especially, but it cannot really work well. You do not just recover from that. Lap times were good. Physically I feel quite good, the bike is good and stuff. Things do not go through. You need to never give up and keep working, as an athlete, but I am happy. You are the first journalist to tell me this. It’s definitely true, that the lap times [are good] and the riding is well.

Today I did a good lap time and always try to get the pole. I finished second behind Tim [Gajser]. Then in the first moto I had that huge crash on the start straight. I obviously damaged the bike pretty bad. The clutch and the bars were bent. The wheels were not straight from the huge crash either. I went into pit lane, stopped in there and the luckily mechanic from [Jeremy] Seewer is a beat. He took my bike and put it straight. Then I started from very far back, like last. I’ve never had that in my whole career. I just rode to not give up and made it happen. I came back to thirteenth, close to [Brian] Bogers in twelfth. It was insane riding. I was really happy. Again, as a sportsman, you wish to be up front and not have that happen.

Even with some good riding in the second moto, I finished fourth. The guys up front jumped over a yellow flag, which is the rules. If I jump, I get some penalty. They did. They had a bigger gap too, and that’s it. I finished second in the second moto, which is nice. Definitely looking forward to do good and be up front, because this is why I ride. The feeling is good. Just need to put everything happen and put all the pieces from the puzzle. I feel like I’m riding to be up front. I did it right now. I just was a bit tight when Tim passed for the lead, because I wanted to go with him. I made some mistakes though. It will happen. I have not given up in six races. It will happen.

[Ed. Note: This interview was conducted after Romain Febvre and Jorge Prado were handed penalties, but before Gautier Paulin was handed his penalty. Paulin was later penalised two spots as well, for jumping on the same yellow flag, so ended up sixth. More on the penalties elsewhere on MX Vice.]

It’s funny. I was going to say maybe you just need a holeshot and then it will all come together. You’ll be out of trouble. I actually cannot remember the last time you had a really good start though. It definitely was not this year. I cannot really think of one last year either…

Honestly, I did not have good starts last year. This year either. I’ve had one, which was in the qualifying session at Valkenswaard. I was fighting with Jeffrey [Herlings] – he passed me and I passed him back for second and third. I had an issue with the clutch, so I had to back off by ten seconds a lap to bring my bike to the chequered flag. I’ve only had one good start. When I say good start, it is the holeshot. It’s not top five. I really concentrate on getting a holeshot and working my ass off to make it happen. I’m 80 kilos, so I’m definitely really thin and trying to be as competitive as possible.

If I start up front I will have wings and definitely this will put me on a good way to the lead. It will happen. Everything will happen. I’m working hard for the team. Bike works good. I’m ready. Step by step, I do not give up. In the first moto I was thirteenth from nowhere. I think no one does that. When you see Cairoli did a fifteenth without that kind of thing, I think. Now next time I’m going to be there. It will really be my case. I’m going to be riding more and more, more free and everything. I’m happy about today. It feels great. I’m going to continue training hard to be where I belong.

Are you actually 100% today with your finger, back, neck and everything? Are you still kind of building health-wise?

I feel I’m 100% coming to Mantova – I’m pretty fragile. To be honest, right now with all the crashes and stuff I feel I’m really on a thin line. The crash in the first moto gave me a huge headache, because I face planted in the soft stuff. That one was heavy. You can see on the video. I’m 100%, but I do not need to make mistakes. I need to continue to be there. The championship is short, but with many races. I need to keep my body healthy. This is my goal right now, so I’m going to go step-by-step to be there every weekend.

It’s funny. I remember saying exactly the same thing to you in Trentino in 2017, which was your first podium on the Husqvarna. You got on the podium there and everyone was like, “Good for Gautier. One more podium. Good to see him up there.” When you finally get a podium this year, which is coming, it will be the same thing, I think. Everyone will be like, “Good for him. I’m glad he got one more podium.” It won’t be a surprise. It’s all there. It’s just a matter of waiting. It’s like Jeremy. Jeremy is going to get an overall win soon. One day it’ll come together. You’ll be on the podium and maybe win soon. It’s just got to come together.

Yeah, I care a bit too much.

Obviously you are one of the best in what you do. The questions are really precise and you are passionate watching the result. Not everybody watches the big picture. They always support the leader. That’s the easiest thing to do in general. When you lose, that’s the main thing. I obviously keep trying, definitely. There will be a lot of people cheering for me when I will be on the box in third, second or first. I know where I came from. Honestly, I do it for myself. I know what I do. I know what I put on the table. Each day, hard work. It’s hard to be happy and not frustrated by little things when you are used to being up front. Right now, I need to be happy. That step is another step, because I’ve been so far out and we are there. Tonight I’m happy.

I’ve got to ask. You can pass if you like. I guess we don’t know anything about 2021 but, based on current form, I guess you are looking forward to it? Keep charging forward? What I guess I’m saying is, you are getting to the end of your career. A lot of people are probably talking about retirement. Full steam ahead for you?

It’s a tough question what you ask me. I’m racing to be up front and to have the possibility to win and be a contender, definitely. I feel I have it in my blood. I feel really healthy. It has been hard for my body, but coronavirus area is a really strange one. Right now I definitely concentrate on the riding and doing the best. It’s going to be a one-year contract. It’s going to be definitely such a strange atmosphere for the future, because even right now you can see how things go on the politics side and how things go for the future for the industry and manufacturers. We’ll see. Everything is open. I’m open. Right now, I’m definitely concentrated on riding. I don’t take care of tomorrow.