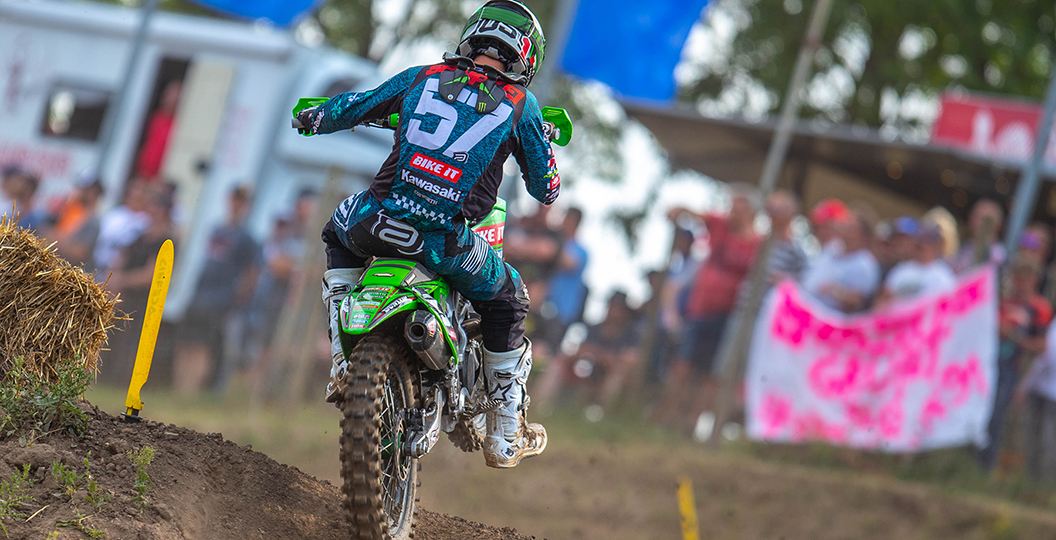 It has been two months since Darian Sanayei was last featured in an MX Vice interview, yet it doesn’t seem like much progress has been made with the Epstein-Barr virus since then. Sanayei is showing a lot of speed in practice each week, which acts as a nice reminder of what he can do, but it is still a waiting game. The latest on his illness was covered in the chat below, as well as his status for the upcoming events.

MX Vice: The results did not really work out the way that they should have done, but again I feel like there are positives. The speed was great. I guess that is just a thing you cling onto in situations like this.

Darian Sanayei: Yeah. Obviously, it is a difficult weekend. The results show that. In warm up on Saturday I went out and I was sixth. I was not really piecing the track together. I was only like half a second off, then I went out in timed practice and got fifth. That was okay for the situation and everything. The speed was pretty good. I got a decent start in the qualifying race and ended up crashing, then you just cannot really make up much ground on the track.

I was pretty far wide today. In the first race I was far back, then I crashed a few laps in when I was trying to work my way up. I was pretty far back. I was going well. Four laps to go I think I was the fastest on the track. In the second race I got a good start from the outside, was in the top ten and just kind of waiting to find my spot and my groove. Unfortunately, we then had a bike issue. I had to pull out.

It’s annoying, because obviously conditions here are kind of similar to Russia. It is hard-pack and the weather is similar. Had qualifying gone well, we could have had the same thing. Maybe a holeshot, cling onto a top five and then that would have made it a good weekend.

Yeah, for sure. Definitely on the hard-pack tracks and everything right now with what I got going on with the Epstein Barr, I do not have to extend my energy and stuff as much. Like Latvia, if you wanted to go fast you had to really grind and work it. Here you just kind of get a little bit more technical and find your lines a little bit better. Definitely hard-pack tracks were helping me out. It was unfortunate we were not up [there] on the start each time.

Would you say that you are actually getting better now? I think the last time I spoke to you was Mantova, so two months ago. Do you think you have gotten better or is it so small that it is not even worth saying?

It’s pretty small. I have highs and lows. It’s gnarly. Obviously, I never really knew about it and I have never gone through this before. It’s a tough thing to go through. Just trying to stay positive through it all.

Is there a chance that you are not going to be better at all this year? Is that starting to become a possibility? I am guessing now, six months in since you found out or whatever, you thought you would at least be at ninety percent?

Yeah, definitely. It is not having got the progress that we wanted and everything. You never know what can happen. I think we kind of decided a little bit this weekend that we are probably going to sit out Indo [Indonesia], so that will give me four weeks off. I think if I can rest a couple of weeks and then slowly start building a little bit of base again, it is definitely I think better for my health and stuff rather than going to Indonesia.

Sitting on the couch for three weeks, I guess that will do something. I guess it hurts in the same way though, because when you get back on the bike you are not race-ready and all of that. It does help a little bit though, right? I guess you don’t know what to do.

Yeah. I think we kind of just strategise a little bit. One week completely off, second week start doing the very minimum and then just slowly build back into it. The last break and stuff I started feeling like, “Okay, maybe I am good now.” I started going too hard. I did three days of training right before Mantova. It was like the worst race that I had. I was like, “Dang. Why did I do that?” I have got to just keep it conservative a bit.

Are you doing anything in the week at the moment? In the gym, on the bike or anything?

I did a ten-minute cycle this week. Just spun the legs out. That’s about it.

I guess even take away the Epstein Barr, with bike fitness you have got to be feeling it in that respect as well.

Yeah, for sure. It’s definitely hard to tell the difference. I can just feel it, because, when I am trying to push my hardest, I just don’t have it. It’s not even like I run out of fitness ten minutes or something in… That is happening too, ten or fifteen minutes, but I feel like I’m only riding at eighty or ninety percent max even when I am pushing.

It’s obviously early to talk about it, but another thing that sucks about the situation you are in is you have got to talk to teams at home and try to explain that this isn’t me. Believe me. That is a tough sell.

Yeah, definitely. It does not look good in any situation. Everybody, every team and stuff, they are looking at your results and that is basically it. When I start to explain my situation, obviously it comes off as an excuse and everything. Whatever is going to work out is going to work out. I am going to try to do everything I can. When I am healthy, I know that I’m going to be up front. That’s just about it.