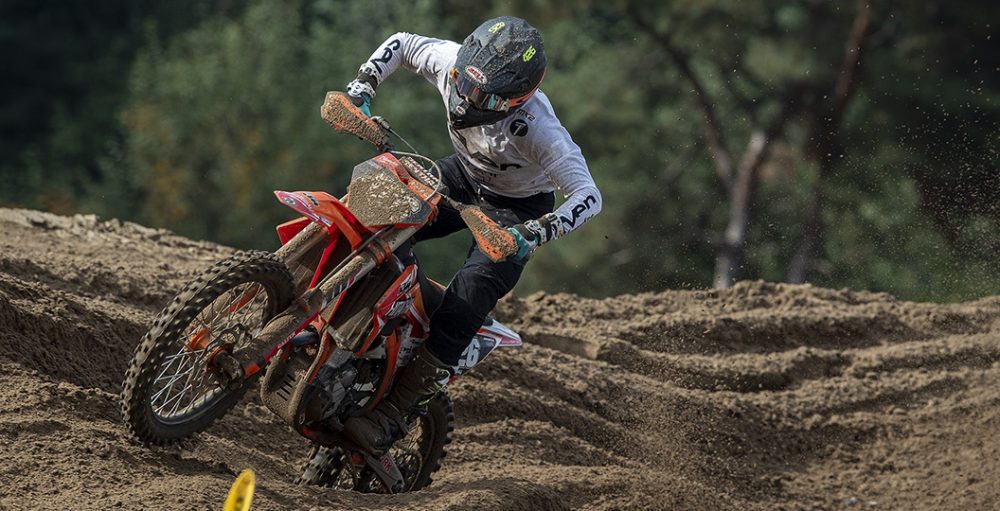 Conrad Mewse did not quite continue his run of good form at the Monster Energy MXGP of Flanders, round thirteen of the 2020 FIM Motocross World Championship, but there was a very good reason for that. Mewse got sick just before the event and then had to soldier through in horrid conditions. Sixteenth overall is still not a true representation of how well he rode, as he explains in this exclusive MX Vice interview from the bottomless sand of Lommel.

MX Vice: Sixteenth overall on the day, which obviously is not what you would have hoped for coming into here. Considering everything that happened, and there was a lot leading up to the race and today, it’s at least something to show for it. A thirteenth in moto one was good, taking it all into account.

Conrad Mewse: Yeah. It was a tough day, that’s for sure. We have had a good run leading up to this. I was a little bit unlucky and caught a bit of a sickness the day before. Today it just wrote me off, to be honest. I woke up this morning and immediately felt so rough. It was just a tough day. This is probably the most difficult race on the calendar, without being ill. It was a super tough day. It is what it is though. I made the most of it. I had a thirteenth in race one. I was running ninth in race two and then a small bike issue at the end.

No fault of anyone’s. It was just a bit of a freak accident. That was that, really. To be honest, the way I look at it is this is probably the worst I’ve felt racing a Grand Prix and to come away with a thirteenth and say a ninth is not too bad. We can say that on a bad day I’m just around the tenth place or just inside the top ten. That’s good for me. Hopefully now we can recover quick for these next two days and get the show back on the road on Wednesday.

You said it after coming through the pack in Spain. Look at the first Latvia. You weren’t even in the points there and nothing happened, so for you to get thirteenth in the first moto with all of this. The results won’t show it, but this is proof again that you kind of made a big step.

Yeah, definitely. I’m a completely different person now, mentally and physically than what I was back in Latvia. Like I said, on my bad day now is a ninth or tenth. We are still scoring solid points. Today it was kind of just survival, really, especially for me. I did not even have five or ten good minutes in me at the start of each race. It was just a case of plodding around, hoping that people made mistakes and capitalising on that. Overall, it was a solid day. I’m pretty secure I think with where I am in the championship. Hopefully we can continue to score some good points. The first thing with me is just recovering fully and trying to get back to my fit self.

I’m guessing it was really frustrating, because you are a great sand rider. You can be on the podium here when you are healthy. You were probably doing laps and your mind knew what you needed to do, but your body just was not letting you. I guess it was driving you insane.

Yeah. For me, this GP is a bit of me. Every year I’ve come here, I just enjoy the sand. I just like the tough sand races. That long roller section, which was at the track today, I would have been all over that if I was fit and healthy. I just could not dial that in today. I was just weak in myself physically. The track was just taking so much energy out of me. Like I said, hopefully I can get back to being fit and I can share my potential around this track. I’ve spent a lot of time in the sand over the years. It’s just a case of me getting a good start, feeling good and then I think we’ll be running at the front.

Anyone hears illness and they think COVID, and it’s not that. We have got to race in two days. It would be great if you had a full week to recover, but I’m guessing you are a little nervous about what is going to happen in the next two days? It’s not a lot of time to get better. Maybe you’ll get a bit better, but you are up against it.

There’s me saying for the last few months that I’m liking these Sunday, Wednesday and Sunday races. Now I kind of need a bit of a week to recover. We have got two days. I’m just going to get plenty of sleep and get lots of fluid of me. Hopefully that will wash it out of my system. To be honest, as long as I feel a bit better on Wednesday than what I do today then that’s already and improvement. Then we have got one left to go on Sunday. We will see how we feel. I’ll try to recover to my best ability.

Seeing as you are a sand guy you’ll be able to answer this one. A few riders said that it was tougher to pass here than it normally would be at Lommel, because obviously it is a different time of year and the dirt is softer. I’m guessing you found that when you were deep in the pack?

Yeah. I think you could say that with the tighter corners and things like that, only one line developed whereas I think last year and the year before there was a few more sweeping turns and things. There were a few more lines. There were a few key points on the track, which I think were crucial in these races. One was the roller section. There was still places to pass, but it was definitely more tight and technical with the way that the track was laid out. With the sand as well, it all pushes into one big berm and only developed one line. I think for sure it still made for some great racing. We look forward to going again on Wednesday.