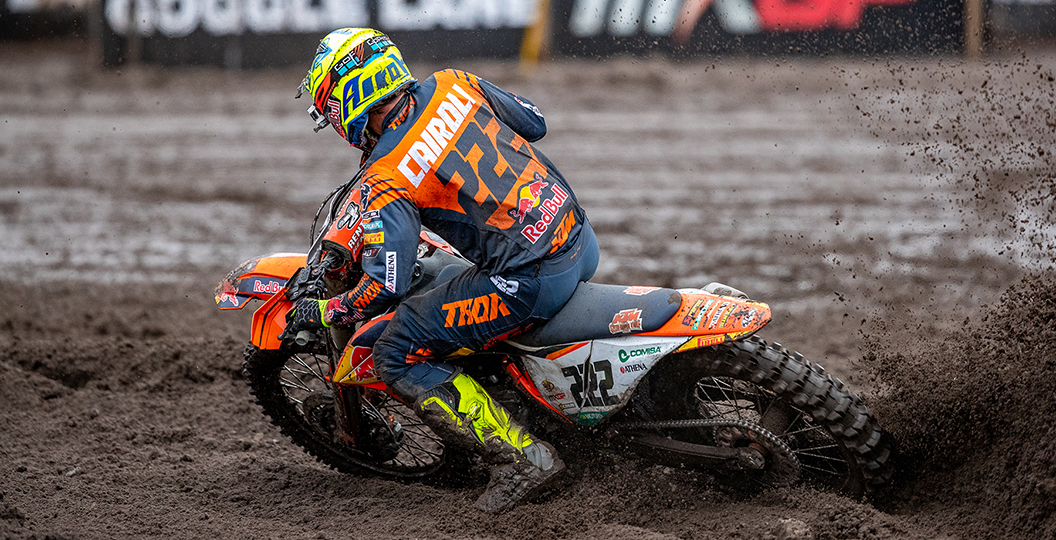 Antonio Cairoli has a lot talk about at the moment! Not only is he dealing with a second-degree PCL tear in his knee, he is also one of the best people to discuss the Coronavirus situation in Italy that could have a severe impact on the 2020 FIM Motocross World Championship. Both of those topics are discussed at length, as well as much more, in this MX Vice interview from the Grand Prix of The Netherlands. This interview was originally posted as a podcast elsewhere on the site.

MX Vice: A bit of a quiet weekend, but you picked it up in the second moto and got a fifth. That was a positive note to end on. Most importantly though, how is the knee?

Antonio Cairoli: Yeah. It was a very, very difficult race. I am happy overall to be fourth. My goal these few races was to start in the top five. I know I have not got the speed or fitness to fight with the guys at the front yet and also now this problem with the knee makes us even worse, especially on a track like this where everybody was losing feet from the footpeg and casing the jumps. Bad for the knees. I was so scared. I had no confidence all the weekend. I was always scared to do something again with the knee, so I was really riding but not flowing. Like I said, fourth place is the best I could do.

If I had started a little bit better in that first moto maybe I could still gain some more points, but the podium was very difficult. [Arminas] Jasikonis was riding very good the whole weekend, and the two guys in front were on another level. On these kinds of tracks, they attack. They had the power and the fitness to attack this kind of track very, very well. You see the lap times were very different between them and the rest.

Anyway, like I said, I cannot really do much at the moment. I am just trying to stay healthy and not twist the knee again. That is what I did today. I am happy about that, because it is healing quite well. I don’t want to hit it again. We made it happen. We didn’t twist it. We didn’t really have any issues. The shoulder is feeling okay. It’s a matter of time before I can gain the strength in my leg and not have pain anymore, as well as no strange movements of the knee.

I can then get the confidence again and try to build up. Now we have one weekend free, so we try to regroup. With this situation with the Coronavirus now it’s quite difficult. It’s a disaster in Italy. I do not really know also what’s going to happen with the championship. I think everything is not so under control, but it seems that everybody is not really taking it seriously. It is very bad though, for Italy especially. A lot of problems now. Anyway, since we are here and we are racing, everything is fine, and we are happy to be here.

I was going to ask you this at the end but seeing as you brought it up… DeCarli is an Italian team. There have been a lot of questions about how the team are going to get to Argentina. You have got to ship the bikes, and actually leave Italy [laughs]. Is that a bit of a worry, or do you feel like it is under control?

No. I think it is a very big problem, especially for the teams in northern Italy. We are from central Italy and there are no problems there at the moment. Northern Italy is closed though, and nobody can come in – and almost not come out. I don’t really know what they can do with those teams. It is not fair if they cannot go to the races. It’s not really a championship anymore. They should think of a better solution.

Like in other motorsports, it has been cancelled or delayed and you finish the championship maybe later in the season. Skip some races now rather than say that there is nothing happening and just keep going. It is a very tricky situation. I think it is not easy at the moment. We are close with everybody. We will do our best to keep this situation as far as possible from the circuits here, but it is happening.

Back to the racing. Matterley Basin obviously had a lot of ruts – different to here – but there were long ruts up and down the hills. Did you knock the knee at all there? Did the full weekend of racing have more of a toll on you than maybe you expected?

Actually, Matterley Basin was not too bad for the knee. I did not put it on the ground much, because I was riding quite clean and not many times you put the knee on the ground. It was okay. A lot of ruts but I just tried to stay on the pegs a lot – it was okay in the end. It was soft and hard on this track, and then you lost the balance.

My shoulder is not strong enough, so I really struggled on the landing of the jumps when it was softer. It was quite a difficult situation for me to ride in today. I was not happy about my speed and about how I rode, of course, but I couldn’t do more. This is what we had to take home.

I had never even heard of a PCL tear. Is it like riding with a torn ACL? Is it easier than that?

No, it is better. Of course, if you turn the ACL it is much more of a problem as the knee is much more unstable. The problem on this knee is that I have already turned the ACL. It is quite stretched. Now also the PCL. It is more when you drag the leg in the corners and when you put weight on the bike to try to squeeze it to follow the lines that it gives me more problem.

Now in the beginning the doctor said it is going to be like this for two or three weeks if I do not twist it again, and after you will feel much better when it is healing. I am happy. Like I said, it is a problem that makes you think a little bit when you are riding so you are really not doing all you want. If you do not attack the corners on this kind of track then you are much slower.

If you get through Argentina then you have a month off. You should be back to your normal self in Spain or Portugal, right?

I hope yes. That was the plan before I twisted the knee. Now it is a little bit slowing down, because every Monday I have to go to the doctor. He has to take out fluid on my knee and put an injection of anti-inflammation in. It is a little bit slow, because I cannot ride on Tuesday and Wednesday. I need to ride on Thursday and Friday. It’s a little bit longer, so I hope after Portugal I have some steps and then after that race I will always become better and better every weekend. This is the goal now.

The good thing is that what we have learned the last couple of years is winning every race is not the most important thing. It is actually being there. If you can manage this situation, not miss any races and then be there at the end you are not out of this thing at all.

Yeah, of course. Like I said, at the moment I’m not there at all with those two guys in front. They have a very different speed, especially today. Not so much in England, but you could see when you are not fit and not convinced on this track. Here you could see a lot of difference between them and myself. My goal is to be there every weekend, in the top five, and build it up.

Hopefully I can fight with them as soon as possible, because that is my goal always – be there in front and on the podium. In the end we will see. I don’t have really much pressure this year. My goal is to try to be back as I was at the beginning of last year. That is my goal. Hopefully trying to step it up still a little bit more before the end of the season. That is my goal!