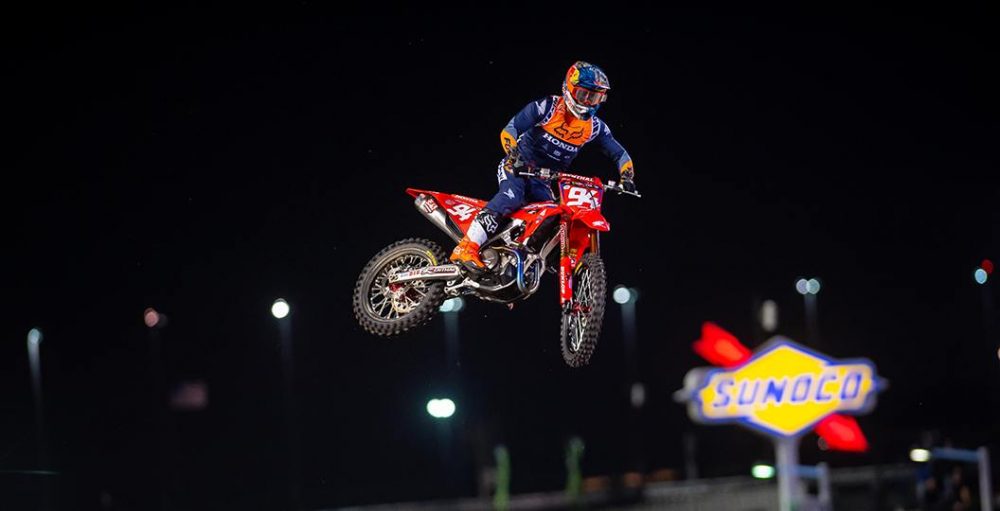 The fight for the 2021 Monster Energy Supercross crown has ramped up, following some games in the 450SX main event at Daytona International Speedway. Cooper Webb ran Ken Roczen wide in the second turn, therefore causing him to lose a lot of spots. Roczen still raced to fourth by the end of the race but lost four points to Webb – he was then seething when interviewed for the NBC broadcast shortly after the chequered flag had waved.

“Obviously I got a really good start,” Roczen said. “Webb just pushed me really wide into the tuff blocks, which caused me to lose a bunch of spots. I think he’s scared of me, you know? That’s why he plays these games. Little does he know I like to play as well. From here on out I’m going to put in that little bit of extra focus, even at home, to just be that much better at the weekend. He is just fuelling the fire and I’m ready for it. The points have closed up a little bit, but we have got plenty of racing to go. I like to play so let’s go. I’m going to focus hard.”

Roczen was not a part of the post-race press conference, seeing as he missed the podium, but Webb was questioned on the move and did not see it as much of a problem. “I had a great start, me, him and Eli were all right there,” Webb commented. “I went through the middle there and wanted to make sure I could get ahead of Ken.”

It sounds as though Roczen and Webb had words immediately following the main event, something that was not captured by the television cameras. Webb commented on Roczen’s post-race remarks. “When we got back, he was running his mouth. He was not too pumped but I’m not sure why. I saw an opening and went for it. He’s focussing on himself this year and clearly he showed how much he’s focussing on himself.”

Now, on the day following the race, neither rider has commented further on the incident. Roczen is typically quite open on his social-media accounts, but has not reflected on the ninth round of seventeen. Roczen leads Webb by two points heading to round ten in Arlington, Texas, next weekend. Most interestingly, Eli Tomac is just 24 points down and has the most to gain from the two leaders diving into drama.