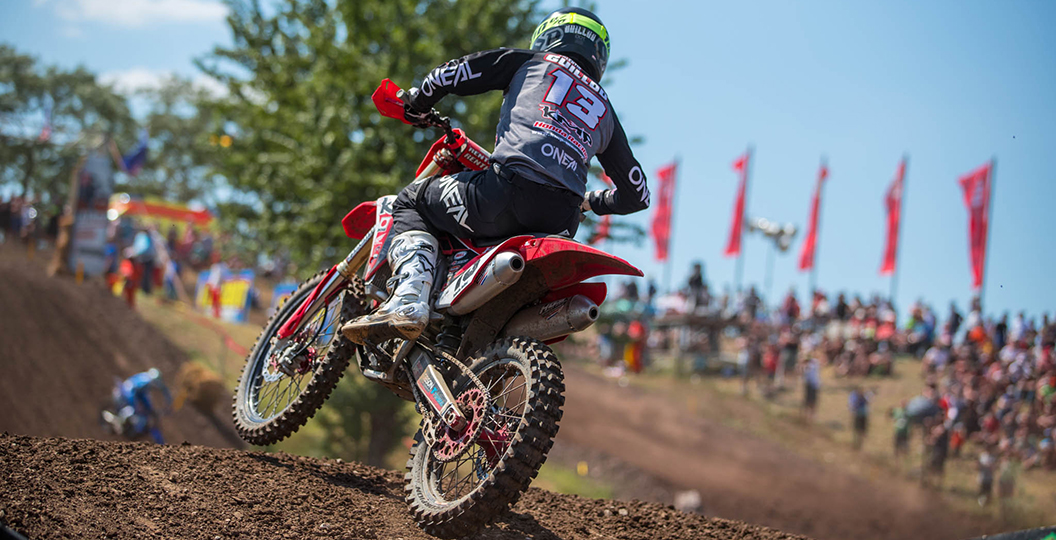 Hey, look who is back! Valentin Guillod competed in a round of the 2019 FIM Motocross World Championship for the first time this term at the weekend and showed some potential, as he hovered around the top fifteen and grabbed the interest of those looking for fill-in riders. What is his plan moving forward? Nothing is set in stone, but Guillod offered up some insight in this exclusive MX Vice interview.

It has been a while since I got to say your name! Obviously first race of the year, new team and all of that. Just sum up how you thought it went.

This winter I want to stop racing, even riding. When I was thinking about riding a bike, it made me… I don’t know.

You thought it was sh*t?

Yeah, really. I just rode two times in USA, because I was there with my cousin and I took my gear and I just ride. That was nothing. I did nothing, only skiing and ski touring at my place in Switzerland. Beginning of April one friend told me, “Come. I have a new 2019 CRF450R. Put your gear on and go ride. Let’s see if you still like it or not. If you do not like it, it is over.” Okay. I put my gear on and rode at the beginning of April.

I was like, “Oh damn! I still enjoy riding that.” I raced in Switzerland. I went in France. I did one race in Germany with Alex from KMP. I was there. I was always racing and riding with a standard bike. I was riding there with my standard bike. He said, “If you want to race German MXGP you can come. I pay you to entry, to start and we do everything.” I said, “Okay, let’s go. We’ll do that.”

I really want to thank Alex for that, because it was a good opportunity for me to see where I am now and what I have to work on for the future. Pretty well. Two and a half months ago I wanted to stop riding a bike and today I finished thirteenth and fifteenth so it’s not so bad now. I know that I have really to work hard physically, be more in shape, lose a bit my fat and then we will see.

Did you have fun or still hate it? That is the important thing here.

Yeah, actually I really enjoyed it. I felt much better than in the past doing a MXGP. I was so stressed when I arrived on Friday and I was just hoping to leave to be back home safe. I was just happy to be racing. I enjoy riding. The guys go really, really fast to be honest. The level, it is really big. People cannot understand. Really thirteenth and fifteenth on the paper, it is not something crazy, but when you see that from seventh to sixteenth position we are riding in the same second a lap in the race, it is something crazy. The level is really high. It’s great. It’s the world championship.

Do you think the level is even higher than last year then?

Yeah, sure, it is even higher. I think every year it’s been higher and higher and faster and faster. The guys are pushing until the last lap. Really, it is a big level.

This deal with KMP, just in case any teams are reading this, that is not for the whole season. You are not locked in with a contract or anything like that, right?

No. I have no contract. Even in Switzerland, it is just a friend who gave me a bike just to ride. I have no contract. Only contract I have is with 6D, 100% and Alpinestars. I want to thank them, because they still support me even though I was not riding this winter. Really great that I have some people like this behind me. I also have the watch, Tissot, who support me now since 2014, so I’m free. If one team needs me, I’m here. I will work really hard the next weeks, like I said, to be more in shape.

Have any teams spoken to you at all this year? BOS need a guy, Gebben need a guy and KRT need a guy. A factory bike would be nice.

Maybe two guys what I hear, unfortunately. I think they need two guys. I don’t know. Me, I can do nothing. I just show that with not much time on the bike and stuff like this I can do top fifteen. Now if I can work really professionally, have a team around me… You know in the week I am doing my tyres to go practicing and to do the races.

It is me who changes my tires. I do my bike. I clean my bike. I do everything myself. If I can have people around me, I think I can quickly improve a good result. It’s not me who takes that decision. I just show what I can do on the bike. I am happy. I think I can still do some scrubs.

Yeah, you did win one thing this weekend. I think you won the MX Vice scrub competition. That is something. We don’t pay bonus money, but it is something.

Always on that jump in Teutschenthal everyone going for the limit with a bigger scrub. It was cool. It’s cool we had some good scrubs.

Finally, it is a bit of a deep question, but over the last twelve months, do you have any regrets about any decisions you have made? Has this actually been a good thing, because you found fun in motocross again?

To be honest, in the life we don’t need to have regrets. The biggest regret I have, it’s when I had a big opportunity with the Suzuki factory in 2015. They proposed me a big, big contract for ’16 and ’17 and I was a bit too young at this time. My head was not strong enough. I missed that big opportunity. That is only regret I have. It was a really tough winter, but now I want to be back.