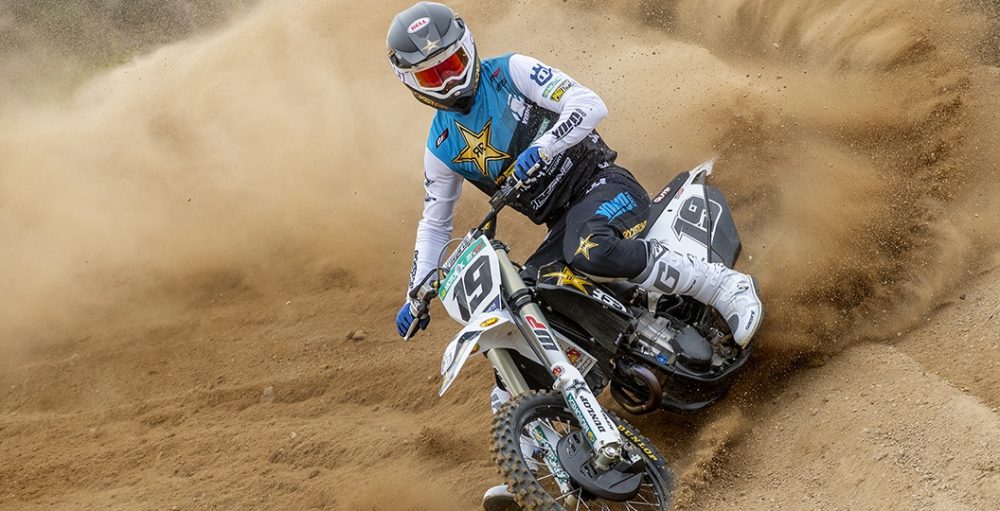 Rockstar Energy Husqvarna Factory Racing’s Thomas Olsen made his 450F debut at the first Internazionali d’Italia round over the weekend and immediately impressed, as he ran with some of the established premier-class stars and was rock solid in his first outing. A second in the final moto, which could have been a victory, was undoubtedly the highlight. Olsen runs through the event and how he has adapted to the FC 450 in this exclusive MX Vice interview.

MX Vice: Talk us through how Riola Sardo went. They were solid motos with no real issues, so it kind of seemed like the perfect 450F debut. It was all positive.

Thomas Olsen: It was just a solid day overall. A lot can happen, especially on that track, with it being the first gate drop of the year and everything. I just felt like it all went smoothly – I was in some good battles, always in control and never had too many sketchy moments. I just went away from there with a really good feeling and that is honestly how I wanted my debut to go. Yeah, I am just happy about it.

I think the most encouraging thing from Riola is that you got stronger as the day went on, which no one was really doing. In the last moto, for instance, you crept up in the second half and surprised a lot of people.

Yeah, it is funny you say that. I could feel that in the beginning I was a little bit cautious, like it was my first race on the 450F and on a track like that… I kind of felt like I was missing the experience a little bit in the beginning. I was kind of working my way into it and, as the race went on, I got more and more comfortable. I was then like, “Okay, actually, I have got a little bit more in me.” I could keep pushing but I just felt like I had good pace all of the way through the moto. I did not really kill myself in the middle of the moto or anything like that, but definitely in the beginning – with it being my first 450 moto – I had to take a little bit more care. Honestly, I did not really know what I was in for.

Was there anything that surprised you about racing the 450F? Even with the bike set-up in race conditions, did something catch you off guard?

Not really. I am racing some really experienced guys. That is one of the better tracks to pass on, actually, but it is so hard to pass the guys who are really experienced. We did some good testing with the bike set-up and stuff – I was honestly practicing on that track when it was even rougher than it was yesterday. I was prepared quite well. In the practice yesterday, I was definitely being a bit of a rookie. I was over-revving the bike in the wrong gear and getting arm pump like hell. I just told myself to take a step back and do it like I did in training. It was fine after that – I was riding the bike how I should.

It is going to be so hard to pass everyone this year. In MX2 you could get to, say, seventh and then it would start to become trickier. It will be a fight for every single position now.

Yeah, that is something that I thought yesterday. Everybody is experienced and no one cares if there is a rider behind – they are going to make life tough on you. It is a case of riding with cleverer riders. They know how to defend their lines. Every time that I wanted to try for a pass, the guys in front of me would just turn it up a little bit or throw up some roost in a berm and I would get blasted by sand. It was a fun experience!

How about the off-season as a whole? Everything I have heard sounds very positive. How has the testing been and all of that?

Like you said, we did not have any troubles with my body or anything. Every single day you get on the bike you have to be 100% on, because things can happen so easily. Especially if you get too excited on a 450F on a track like that – the bike can take off at any second! I felt really in control yesterday. I had to get some hours in on the bike first, then we tested in a little bit and then I got more bike time in. I felt like doing it that way meant that we went in a really good direction. I already did some tough hours of riding in Belgium in December. The sand was so soft. I would go with one setting there, then come here [to Sardinia] where there is normal ground and have to adjust again. I think that the tracks here are rough, so it is good to set your bike up in those conditions and then it will work everywhere.

Has this whole process been easier than you maybe thought it would be? A lot gets said about moving to the 450F and there is a lot going on. Has it been smoother than you even expected though?

I guess that is why you raced Riola Sardo as well. We are 80 days away from Oss, but I guess this was a good opportunity to push yourself and see how things go in a race setting.

Yeah, exactly. It was a bit of race experience and, honestly, why not? It is fun to go racing. If I did not race there, then I would have gone to a practice track and done more riding. Why not get behind the gate, get nervous a little and work together with the team? That was my first race with the team, so I could get to know everyone and have a good time racing. I could take a lot away from it. There is so long to go until the season, but if the day had not gone as I had hoped then I could have still taken a lot away and had time to adjust. Whatever happened, I was just going to take experience away from it and do work.

You are racing in Sardinia again this weekend, but what do the next two months look like? Are you going to rest and then build yourself back up or hammer down until Oss?