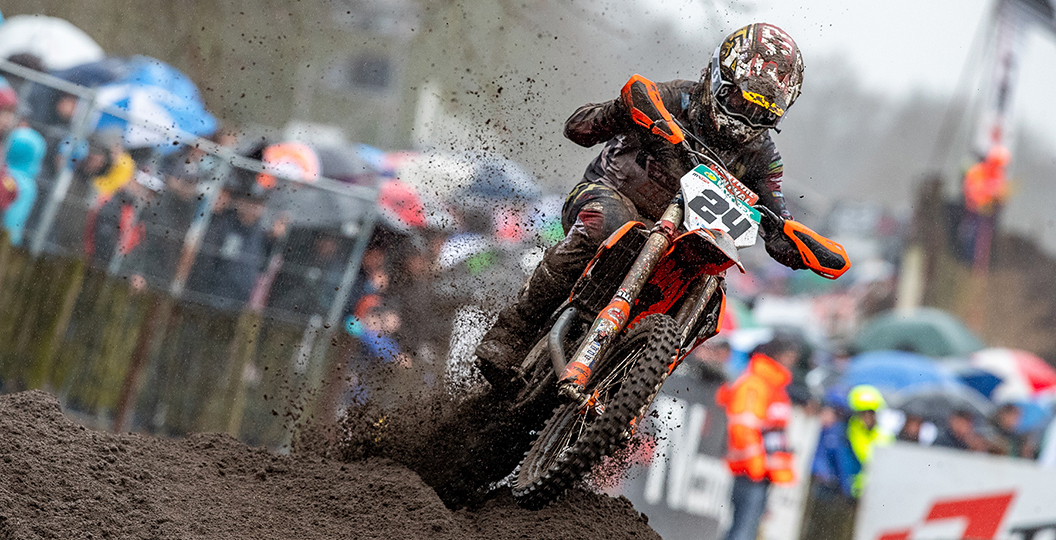 Two rounds of the 2020 FIM Motocross World Championship are complete and Shaun Simpson has already proven that starting his own SS24 KTM team – therefore entering the world of being a team owner – was the right thing to do. A fantastic result at the Grand Prix of The Netherlands has captured the attention of fans worldwide, so it was only right that we got his take on the event on Sunday evening. An abundance of topics are covered in this MX Vice interview from Valkenswaard.

MX Vice: Great weekend. The DNF is a bit of a black cloud but throw it out, I think. Who cares? Speed was amazing. Second moto was good. First moto was amazing. All good!

Shaun Simpson: Yeah. What more can I say? Yesterday was good. I was not outside the top ten all weekend. The first race today was just a pisser, to be totally honest. I have never felt so comfortable running that speed, looking at [Jorge] Prado thinking about where I am going to pass him. The same in the second race. I was looking at [Antonio] Cairoli thinking, “I know you are not one hundred percent, mate, but I am looking for a way around you.” I have not felt like that in a good while. The first one… We have got to throw that one away. The good thing about this weekend is a lot of guys had one good moto and one bad, or two average ones.

Had I had that first race, we would have been sixth in the championship and we would have been fourth overall. That is dream stuff, really, for working out of a couple easy ups with me, my wife, my dad, my mum, and a couple helpers. What more can we do? We are showing people that motocross is a blood, sweat and tears sport. You can have all the fancy gear in the world, but when it comes down to it… If the rider and machine are working in harmony then that is all we need. Pretty pumped with how we felt this weekend but just looking to continue that form into next week, at the first ACU British Championship round, and then into Argentina.

It is crazy to say it just two rounds in, but I feel like you have already proven that you are not done and all it takes is a happy rider. You get to make the choices. You get to put yourself in a position that you want to be in, most importantly, and look what it does.

I can honestly tell you right now… I’m not even one hundred percent happy with the bike. We have still got more that we can squeeze out of that thing. That’s only a positive. I’m just really happy. My family life is great. I’m grafting away. I’m spinning spanners during the week. I’m doing all-night drives with my dad. We are just sorting out parts and trying to do training.

I’m trying to be the best dad I can, as well as husband. It is all paying off right now. This is what makes it all worthwhile, these little results. The thing is it’s not that I want to prove anyone wrong – I want to prove myself right. Deep down I knew I had it in me. I want to show that to myself, no one else. Proving other people wrong? If that happens, then fantastic.

Bit of a weird Valkenswaard. Everyone has said it. Obviously, we are used to a harder sand track here. It was slower and all of that. It still kind of played to your strengths as a sand fly, huh?

I honestly think it did not really matter how it was this weekend. I seem to ride it well. In the first practice yesterday, it was a bit gloopy and a bit like porridge. I rode well. I think I was ninth in the first one. In timed practice, which does not play to my strengths, eighth. Even better! It was actually starting to dry out and get a bit less technical in the race, but I excelled. I actually came from around tenth through to finish fifth. Okay, there was a couple of guys who crashed out. [Tim] Gajser had a bike problem and a few other things happened, but we’ll take that. That gave me a fantastic start position today and I capitalised on that.

The conditions did not matter. When you are riding good, the conditions do not matter. You are there. It’s like I said at Hawkstone to a few guys. Good guys do not really have bad days. The good guys are always there. Even [Clement] Desalle, he has had a bit of a sh*t day. Still getting sevenths and eighths, and that is his worst day! I was wanting to average twenty points a race. Okay, Matterley did not get off to the best of starts. You could say, “You only got three points in that first one.” Well, three is better than nothing. It was looking for a long time that I was not going to get anything in that moto.

This weekend we came back and got nearly twenty points in one moto. I nearly salvaged that again. We are a little bit behind the ball, yeah, but I honestly think that if I achieve top ten in this championship this year or can get top ten finishes… We have had a top five today and that is over-exceeding anything I genuinely thought that we could do. I want to squeeze a top-ten result in the championship out by the end of the season – my consistency will be key – and I want to win the ACU British Championship. If I can do that, fantastic. If we can do anything more than that then I’ll be over the moon.

Two rounds in now, so the season is fully underway. I have just put [Kevin] Strijbos in the same position. What is one thing that you really like about being your own boss and one thing that is maybe harder than you expected, and that you did not realise until you got to the races?

I just like making my own decisions. I like waking up in the morning and having a goal. I have not touched my golf clubs in a while. I like playing golf and hanging out with the boys, but right now I’m focused on doing this. Whatever it needs and whatever it takes, I’m going to be doing it. My wife, Rachel, and my little boy are fully behind me. My mum and my dad too. Everyone who is helping out. It’s easy to see a few people wearing the SS24 jackets at the moment, but once we get deep into this season it’s just going to be me and my dad there.

That is all we have got. That is all there is on a day-to-day basis at the workshop as well. We are calling in favors. The worst thing about it, I think, is probably just the sheer workload. There is no stress. I’m not getting stressed by it. Just the workload. People say there are not enough hours in a day. I’m lacking a couple of days in the week, or even weeks in a month. Five-week months would do me well at the moment. I feel like we are at the top of the hill now. We are actually rolling, and things are pretty good, because right now we are racing and that’s when the repetition starts.

We go home tomorrow and clean up. We go riding Tuesday and Wednesday. You clean everything, pack it all back up, and you go to the British Championship. Then it all happens again! We are on top of the hill. We have got race bikes built. The crate for Argentina leaves on Tuesday. That has got to be done. It’s all happening! The planning that we have done until now is going to pay off. Until now, I’m definitely down on sleep and down on training. I am down on everything, but it’s all worth it because the results are looking pretty good at the moment.

Trentino has been postponed. That is now out there. That four-week rest from MXGP after Argentina, is that actually going to help you? That will be a nice opportunity to look at what you have done so far and what needs to improve before you get to a fresh start in the series.

Wash up and get back to the grind in the workshop. I want to be able to go to the track and eat a sandwich, throw a few quick laps down, hang with the boys, put my sunglasses on if the weather gets any better, and just actually enjoy it. Right now, it is all about graft.