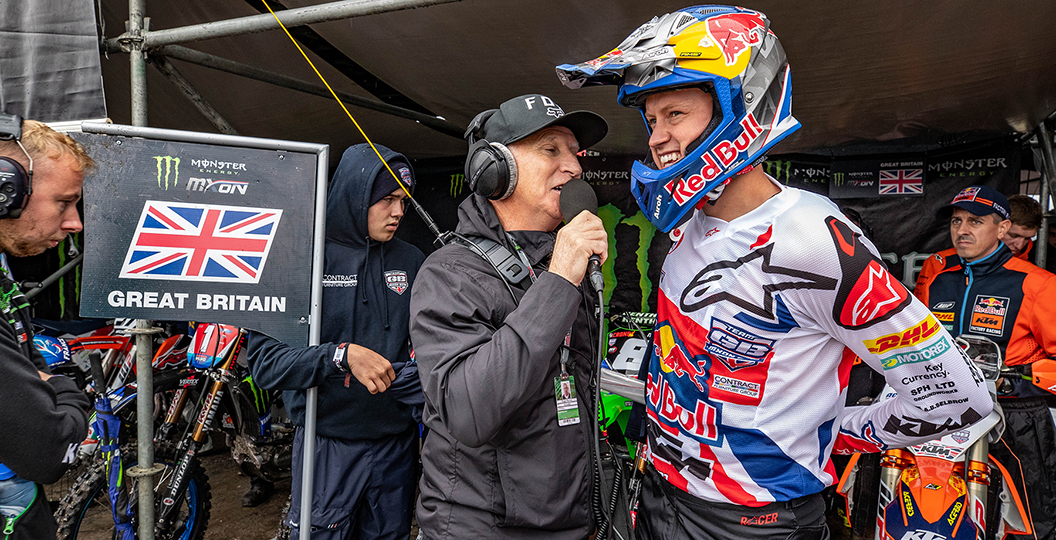 When Nathan Watson left the Grand Prix paddock at the end of 2015 to pursue a career in the enduro world, the chances of him ever representing Team Great Britain at the Motocross of Nations seemed slim. Watson finally got that opportunity at the Assen TT Circuit over the weekend though and made the most of it, as he helped his nation climb onto the overall podium for the third year in succession. All of that is discussed at length in this exclusive MX Vice interview.

MX Vice: It’s nuts that you are here. When you went to enduro at the end of 2015, I’m guessing you kind of felt like the dream of racing this event had died a little bit. Not only are you here, but you are on the podium. I guess that’s more than you could even ask for.

Nathan Watson: Yeah. It’s unbelievable. It was something that was always in the back of my mind that I never got the opportunity to do this race. After these last few years – especially now that I have started doing these extreme races and stuff that are the polar opposite to motocross – I never expected to be here. When I got the call, I worked hard.

Unfortunately I had a bike problem in the first one, but the boys did good and I had a solid race in the last race. To be on the podium, it’s just like a dream come true. First time with all these press conferences, first time here with all the fans and everything. It’s such an amazing experience. I’ve enjoyed every minute of it.

No. I’ve been doing the beach races every winter and doing a lot of sand riding. Once I heard it was at Assen, if they asked me then I was there no matter what. I would have ridden anything. We have got some great sand riders in the UK, but unfortunately there were a few injuries and stuff like that. I was thinking, “Maybe? Maybe the dream could come true?”

When I finally got the phone call, I had already done a little bit of preparation. I was like, “Yes. Bring it on.” For the conditions like this weekend, it was really nerve-racking. It was a lottery. Everyone had to have some consistent results. There was a lot of pressure going into my two races.

Was the adjustment back to motocross or sand riding easier than you thought? I guess you never lost it. You have always been a sand master. Was it actually much of an adjustment?

To be honest, I think my riding has improved a lot since I’ve gone to enduro. I’ve always used motocross as training for enduro, so even though I’ve been on an enduro bike I’ve been doing a lot of motocross. I think I’ve definitely improved. I’d like to do more races because, when I go practicing and stuff with some fast people, I always have quite good speed.

It’s sometimes frustrating that I can’t do more of these races, but these guys now are so fast. It’s so tough here. You have got to be here every weekend racing. It was the first time off a mesh start as well – I got good starts somehow. I don’t know if I fluked it or if I picked it up quick. Really happy with how I’ve gone this weekend.

I think we know why you got good starts. The fake Team GB manager, Marc de Reuver, was on you pretty hard this week. I heard he was texting you and everything, then there was obviously the practice day as well. How was it working with him? Did he scare you?

Yeah. He definitely whipped me into gear on the starts. He saw that I was pretty bad at them at the start of the day and just gave me some basic tips. Obviously, I only had one day to pick it up. I had to really think about it and work hard. I’d like to thank him for that, because he definitely kicked my ass and got me into gear and got me out of the start. He helped me out with that, I think.

Has he actually spoken to you much this weekend? Has he been around? I feel like he’s basically British. I don’t know why, but he is all over it this weekend.

Yeah. I think this is his last race was [Adam] Sterry and with Roan [Van De Moosdijk] not on the Dutch team, I think he’s focused on Team GB. That is good for us. He’s helped us out, definitely. He walked the track with us and gave us some tips, because he is a bit of a sand legend. Just been helping out all weekend and giving me some little tips on everything really. He’s been a second team manager, I guess.

What about your bike? I heard two things. You have got a long swingarm on – that you would use for beach races – and you have got an Antonio Cairoli engine or something? Either of those true?

I’ve got a factory engine. It’s not the exact same as Cairoli’s spec. It’s a little bit different to suit me, but the long swingarm is true. I have the beach race swinging arm. I didn’t know if I was allowed to use it so I wasn’t actually training with it, but when they told me I could use it on Monday I chucked it straight back on and felt way better with it. It wasn’t a true sand race this weekend. There were not big bumps and dry sand. I’d like to come back and do a proper sand race.

Speaking of coming back, are you on a lifetime deal with enduro or are you ever coming back? Has there even been people this weekend who have popped by and been like, “I might have to remember your name in the future?”

No. I’ve not had interest, to be honest. I’ve signed for next year in enduro again but I’m happy with that. I’ve had a good career in enduro now and I’ve got a good system with my beach races and the WESS. That’s on the cards for next year. Definitely like to somehow do some more motocross races and fit some more of them into the calendar, but let’s see.

Are the enduro team happy with you doing this? Were they a bit reluctant? You are not in a title hunt, but you are in a championship. You had a race last weekend and one next week. This is like the worst possible timing.

No, they have been really supportive. They know what a big event this is, and they gave me that opportunity. They couldn’t hold me back from this opportunity, because it is my first time. They have been really supportive. They have helped me out and given me the material I need and put me under this tent. It’s been an unbelievable experience being next to Jeffrey [Herlings] all weekend and getting changed with Jorge [Prado] and Jeffrey. I feel like I’ve been a factory motocross rider for the weekend. It’s been good.

There is one positive here. Team GB obviously finished third last year but they did not get to stand on the podium, which means you have got one over on Ben [Watson]. Who would have thought that when you were away in enduro?

Exactly. I’ve experienced the full Motocross of Nations podium and press conferences. In front of all them fans, it was unbelievable. Definitely got one up on Ben. I”m sure in the future he’s going to be back on that ‘Nations podium. I hope so, anyway.