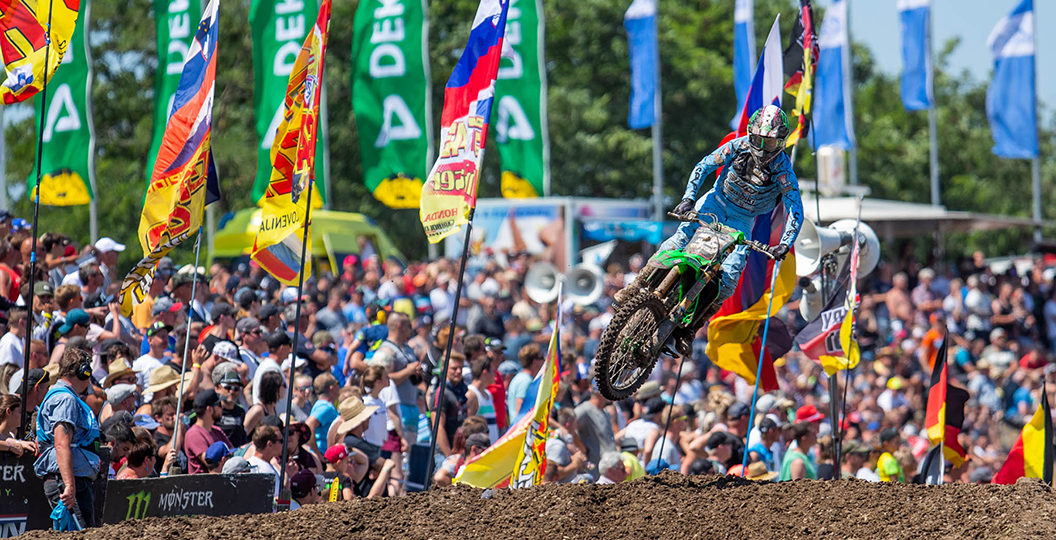 It may not be immediately obvious, but Mitchell Harrison is quietly making progress aboard his Bud Racing Kawasaki. Harrison has strung four consistent motos together and showed potential for the first time since his initial race with the team in April. Harrison admits that the process of adapting to Europe is taking longer than expected in the exclusive interview below, but it seems like there could be big things on the horizon.

MX Vice: Another solid weekend. Consistency is maybe the hardest thing to find in a situation like this, but you have kind of got it. Two twelfths last week and then two times in the top ten again today. Compare that to a month or so ago and this is proper progress.

Mitchell Harrison: Yeah, a lot of progress. I had to figure out the bike and just the style of racing. It has been a lot of progress. I’m really coming into my own, loving the bike and loving the racing. I just need to figure out starts. That is, I think, the difference for me getting a potential podium or a top five to where I am at right now. I always have to come back from eighteenth or twentieth, so that’s fun.

Funny you bring up the podium, because I guess that is one of the weird things about your situation. You have been on the MX2 podium in MXGP before… You know what it is like to taste champagne in either series. I guess that makes it tough to manage expectations.

Yeah. I am sure there were huge expectations on me coming in, but I only had a week to be on the bike my first race and then we had a month off. Still I just couldn’t figure it out. I don’t know what it was. I know I can be on the podium. I was up there with [Jeffrey] Herlings and then I was up there with the best guys over in America. I know what it takes, and I know I can get there, but it just might take a little more time. It might take until next year, but I know I will be up there eventually.

Based on your own expectations, are you ahead of where you thought you would be at the moment or is it taking a while?

Definitely taking a little longer. Obviously, I thought I should have been top five. Look at my very first race. I was top five. It is just the starts. It is so hard if you do not get a start here. The track is so different. In America there are more lines. You can pass easier. It is hotter over there. Everybody is really similar here. I think this weekend was really good, because I passed a lot of people and I was really fast. We are definitely building in the right direction.

It is easy to say that getting starts is an excuse, but it is the same for every single guy. I don’t know what it is about the tracks this year or the competition, but everyone needs a start in either class to make it happen and you are just another name in that group.

Yeah. Everybody is fast. You go back to twentieth, they are fast. I have been battling back in twentieth. It’s all about the start. It’s so different over in America. If you don’t get a start, you can get back up into the top ten if you are one of the top guys. You can get back to the top five, but here it is just so different. It’s awesome. It’s great competition. It’s fun. Once I get a start, I feel like I’ll be deadly.

Five years ago, everyone was saying American guys were better at intensity right out of the gate. Do you feel like maybe you are lacking some of that here though, because obviously once everyone gets spread out by lap two it is impossible to make progress? If maybe you could make quicker progress in lap one, that would at least give you the feeling of a good start.

I don’t think I’m lacking intensity. It is hard to be really aggressive in the back of the pack, because if you go over-aggressive you are going to fall. I actually made quite a few passes back there on the first lap. Over in the USA they are aggressive, but you have more lines. That is the thing. I would not say they are more aggressive over there. They like to cut over. They really like to cross jump over here, so that is different. Sometimes I’m like, “Whoa.” I like to be patient in the first lap, because it is better to be up than on the ground.

What did you think of the track this weekend? It is hard-pack. People are going to look at that and go, “Oh! You have ridden hard-pack before.” This place is pretty unique though, right?

It is a really cool track. It reminds me a lot of High Point. Not as much elevation, but the ruts for sure. It is awesome. You have just got to be smooth. If you over-ride it, it is going to bite you. It bit a lot of riders this weekend. I was just patient and smooth and it treated me well. I loved it.

Summarizing your journey so far, obviously we have been trying to do one of these for ages, what has been the easiest thing to get used to and the hardest thing?

The easiest thing to get used to, that is a tricky one…

No, everything is pretty hard. I guess the easy thing is that Bud Racing helps me so much. They do basically everything for me. It would be a really hard transition without them. I cannot thank them enough, especially for bringing me over here. Hardest transition, the tracks. It is way different. Way different than America, but I love it. I think it is making me a really good rider. If I go back to America, I think I am going to be a better rider for coming over here.

Are you in for Indonesia? Team is going and that whole deal?

Oh yeah. We are going, so that is pretty cool.

Do you know what to expect from Indonesia? I will be real with you… I’m British. It’s a long way from home for me too. It’s weird. It is just straight weird.

I heard that you will be living like a millionaire over there. It’s really cheap. Everything is really cheap, so that will be cool. We’re staying in Bali. It seems like it’s going to be a vacation, then we are going to go race some dirt bikes on the weekend. It’s going to be an awesome experience. I don’t think I ever thought I was going to go there, so I’m just excited.

We have got eight of these things left. What would you say your expectations are or what would you like to achieve before this thing wraps up?

I definitely believe I could get a podium. I would really like to get up front and follow [Jorge] Prado for a few laps. He is an amazing rider, so it would just be cool to stay with him for a little bit, but I think that I am fast enough to challenge for wins and challenge for podiums. I just feel like I need a start.