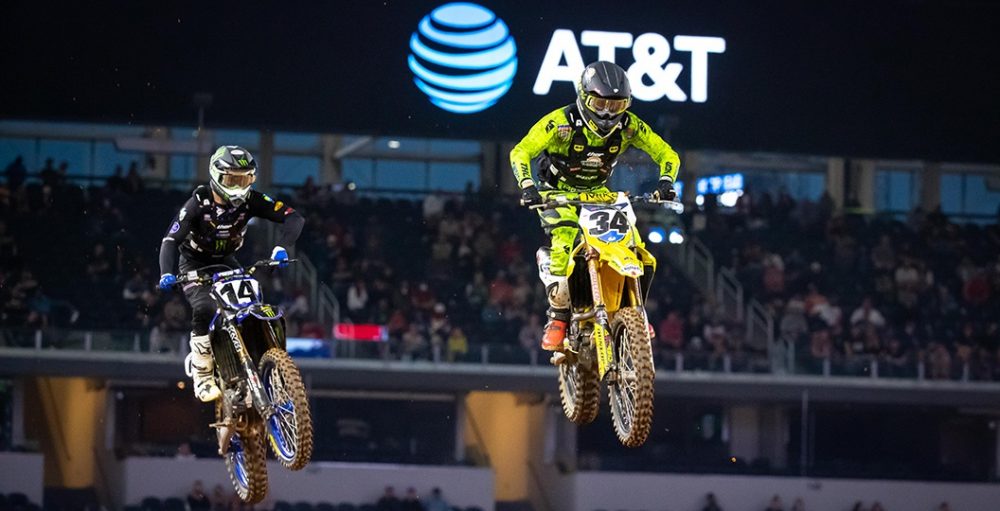 The MX Vice podcast network will be growing significantly throughout this year. The newest show, Anstie in America, offers an unfiltered look at what life is like for Max Anstie as he tries to make gains in the 2021 Monster Energy Supercross series. Anstie is rather insightful, as everyone is aware, and even more so when he is dropped into a relaxed setting. That is exactly why the Anstie in America podcast is worth downloading on whatever your preferred platform is. Snippets from episode one are below.

Max Anstie on Arlington 3: “I got a really good start in the heat race and put myself in a good position. I actually got [Ken] Roczen back in the second turn, then he passed me going into the whoops. I actually had a good little race going and started stepping up. I had to be very conscious of… There were some big jumps. I had to make sure I respected them and did not do anything silly. My game plan was to respect the rhythm sections and then let it go in some of the turns. I still did not want to do anything silly, going through the rhythms.

My start in the heat race was great – I know I can do it – so I don’t know if I just wanted a good start a little too much in the main or whatever. I just wheelied. I am always having to come from the back. Obviously, in this class, there is not much moving; I passed a few guys and got into the top thirteen. That is fine. I feel like if I could start inside of the top eight then I could be somewhere around the top ten and go with the flow of those guys.”

Max Anstie on spotting new starting techniques: “It has been a thing for years; I saw Jeremy McGrath do it back in the day. You can either shift with your heel or shift where you boot is between the shifter and the foot-peg. Roczen is really good at it and so is Dean [Wilson]. Dean has definitely got that technique down. The thing with the starts over here, which I have noticed… Everyone’s bike is really good, and the metal grill definitely makes everyone closer too. In the outdoors over here, when it was prep your own gate, I felt like I had a bit of an advantage. I can prep a decent gate.

The metal grill makes everyone closer, but then after the gate in supercross… It is either ripped or perfect in MXGP. Here, in supercross, it is super, super, super grippy with a bumpy little rut. It is weird. You go over the gate on a 450F and your gearing is so short, whereas your bike is pretty mellow in MXGP. These supercross bikes are so bloody aggressive; you can tell yourself all you want to stay forward and keep your head over the handlebars. It’s so easy for the front to come up then you feel like you are falling off the back. I have noticed that Cooper Webb will do one start where he puts his feet on and one start where he does a little leg shift. It is a weird technique…”

Max Anstie on learning bike set-up: “I keep saying that I don’t know what I am doing, but I do. I know what the bike needs to feel like. It is just certain things with the whoops and jumps; I don’t know whether it is technique or not. Sometimes you have got to get on with it and make the best of the situation. The team’s doing a good job at making the best out of everything we have. I am getting better each week. If you had given me the best set-up in the world at the first race, it probably would not have worked because I was too slow.”