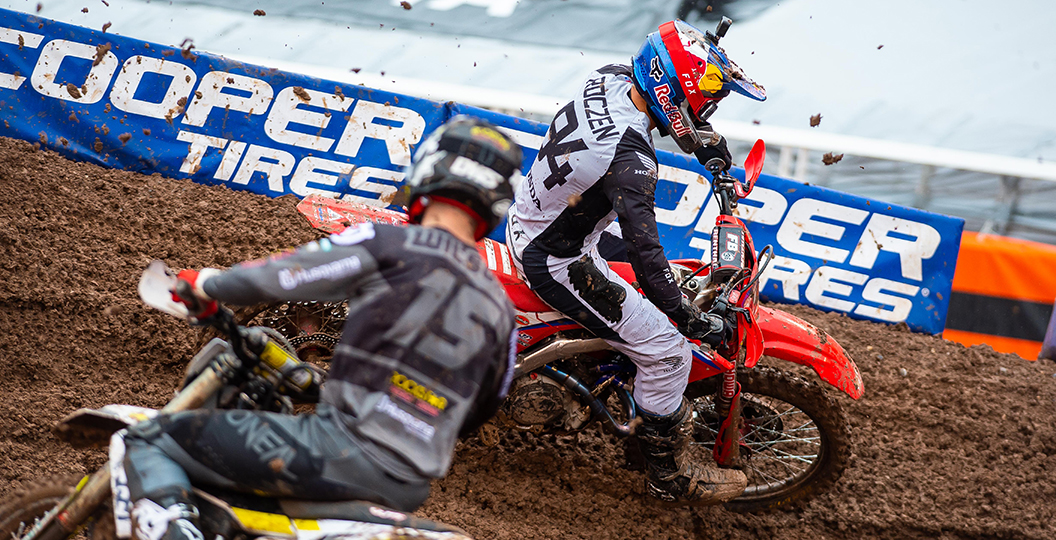 Salt Lake City 3 was a significant turning point for Ken Roczen, as the deficit that he faces to Eli Tomac in the premier-class standings doubled in mucky conditions. This did not come as much of a shock, following a disappointing ride at Salt Lake City 2 and the statement that he released after the event. Roczen revealed that he had suffered with breathing issues for months and that was stopping him from pushing for the duration of a main event.

Most presumed that was the reason for his tenth-place finish at SLC 3 on Sunday, but it seems another problem was causing him some discomfort in the main event. In the quote below, which was released as official communication from Honda HRC, Roczen explains that he used the wrong tyre in the main event and it did not work well. The health issues are obviously referenced too. Read his statement below.

“These past two races obviously haven’t been the results that we needed to be in the fight. That doesn’t mean that we aren’t still trying. Sometimes you are dealt a hand of cards that are completely out of your control, but we’re trying to make the smartest and quickest decisions to get through some of the health issues that keep coming up. My heat went well and I led a handful of laps until I got a flat.

“The boulders started popping up and I think I know right where the rock got me in the whoops. With the weather changing, we tried to make a tire decision that would give me the best chances of not having that same thing happen in the main, but that obviously didn’t work well. I’m not the type of guy that likes to roll around or is satisfied with a fifth or tenth-place finish, but sometimes if that’s the best you can do for the night you just have to accept it for what it is.

“I can’t thank my team enough for being patient with me and for never wavering in their support. I know the sacrifices they’re making to be up here and all of the work they’re putting in to give me the best equipment and support, and I want to do better for them. I couldn’t be more grateful for them and I hope we can turn this around and be in a better position to put up a fight on Wednesday.”

The press release from Honda HRC also contained the following quote from team manager, Erik Kehoe, which echoed some of Roczen’s comments above. Seventh was where his teammate, Justin Brayton, finished, which was the best finish that he’s had whilst racing in Utah.

“Coming from the last race, our starts were better, and Justin actually made some progress this week after we made some changes on the bike – he had a solid ride. I’m not sure about Ken and where we’re at. After he got that flat tire in the heat race, we made a change for the main event, which probably wasn’t the right direction. Ken had a hard time keeping a good pace for the whole race, but we’ll take these next couple days to regroup and get back out there on Wednesday.”

Ken Roczen still sits second in the 450SX standings with four rounds to go, but now faces pressure from Cooper Webb in third. Webb, the defending champion, is just six points down. 26 points is the gap between Roczen and the current leader, Eli Tomac.