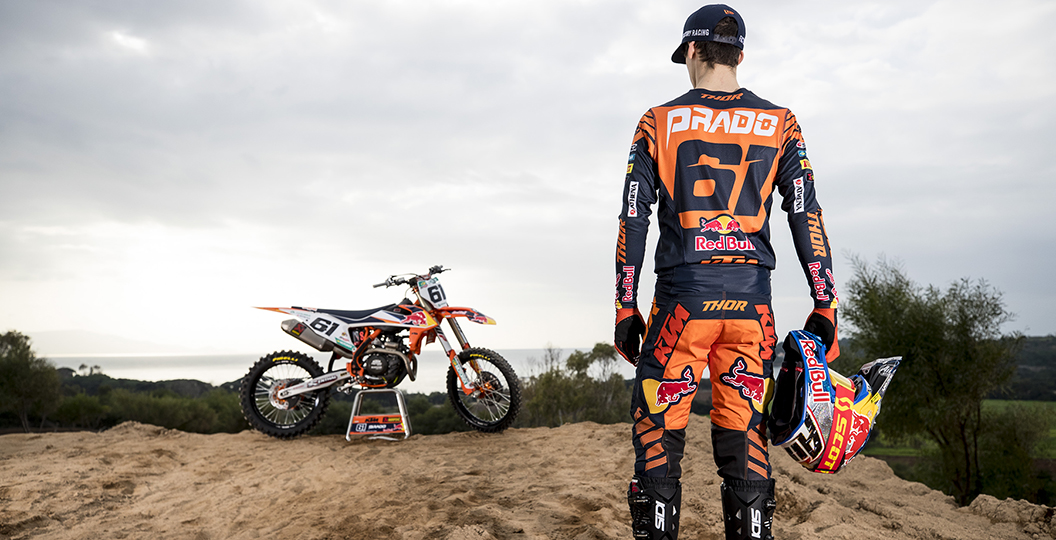 Jorge Prado was not fully healthy at the beginning of 2020 FIM Motocross World Championship. In fact, he was nowhere near that. Has the lengthy break helped him though? There was the collarbone injury in June, of course, but has he still been able to make progress? The Prado camp has been quite quiet lately, so MX Vice editor Lewis Phillips got the reigning MX2 champ on the phone to discuss everything that has gone on since Valkenswaard and where he will be when racing finally picks back up in Latvia on August 09.

MX Vice: Let’s start with the collarbone injury. I feel like everyone blew that out of proportion, because it does not take long to recover from, but how much time did you actually miss?

Jorge Prado: You know, this season started off tough and it is even getting more tough. I started riding two weeks before England, after the leg injury, then with the COVID-19 I could not ride the bike, like a lot of the riders. When I did start riding again my leg was still hurting, so I had to wait a little bit. I started getting my rhythm again and had two and a half weeks of riding, and then I got injured again. I lost the front in a fast corner and just went over the bars. I landed exactly on my collarbone, so I knew it was broken in the first moments. I was out for four weeks and then I started riding again. I haven’t done much riding in 2020, to be honest.

I didn’t think that your leg would still be hurting. I guess that if everything was normal, and we were still racing every weekend, that would be a real problem?

Yeah, because the problem is not really the leg. It’s the knee. I had a very, very big impact in the knee. Even when I crashed, back in December, they didn’t even know if some ligaments were damaged before the surgery. I had a very big hit in the rotula, so I have been struggling with the knee. I tried to do some exercises during the corona, to make it feel better, and I am feeling quite good at the moment to be honest. There’s not so much pain. When I do some strange movements or positions then I feel the pressure in the knee – it’s the same when I do the first laps of riding in the day.

I can feel that the problem is still there. I was struggling with the knee a lot during the first races, so I just took my time to recover and started riding when I thought I was quite alright. I started riding a bit late, after the corona, then I got injured at a bad moment. I am feeling okay, quite positive and I have been working a lot. I made the most of the time I was injured. Training and staying fit were the main focuses.

I guess the knee is one of those things where it will be fine in a normal situation. If you dab it in a corner though, it could end up being really painful.

Yeah, exactly. I was so scared at the first round, for example, because I started training two weeks before, like I said. The first week I didn’t even take my foot off of the peg. I went straight into a track with big ruts and jumps. All of the jumps I was hitting in training were quite small, so when I arrived in England I was quite scared about jumping. I didn’t know if I could handle that. I was going a bit to one side in the sand in The Netherlands, because I wasn’t pushing enough with the other foot. Yeah, it has been quite difficult. It was always a bit painful and when there is something painful then you don’t ride comfortable. I am starting to feel comfortable now, so let’s keep going this way with no more injuries.

Ignoring the injuries, do you still feel like you are playing catch up with bike fitness? You know, just that extra one percent that keeps you sharp.

Motocross is a sport where you really need to make motos. You really need to ride the bike to be fit, so it’s not like going to the gym and getting big legs is going to help you go fast on the bike. You really need to put all of the work into motos everyday. I do not have that work in me, because I have not ridden [laughs]! I can tell you that since the ‘Nations last year, I counted that I have had seven weeks of riding. Seven weeks! I do not think anyone on the line has only ridden for seven weeks since the ‘Nations last year. Then you think about how it is the 450F and a new bike for me… I do not have that much time on it. Like you said, I really need to start doing the motos now to get that basic fitness. Hopefully I can be a bit ready for the first round. I am working hard, so I think I can feel comfortable at least.

Having three rounds in Latvia in a week will be good for you then, as it will be a lot of bike time. It is going to be a big toll on your body though.

Well, I can tell you that… I like it. I like the one-day events. Not as much time on track and then you can use your full energy in that one day. If it is two days, then you kind of need to reserve a little bit for the Sunday. It’s quite good for me coming from injuries. I will have some time to rest and get fit again from Sunday to Wednesday and then back to Sunday. Maybe I will do some riding if it is possible? It’s good for me, I think.

I guess the idea is to get through this season, build yourself up and then be really ready for 2021. That will be when you are in a position to really go for it!

Yeah! It’s really important for me to race this year, because I have not really raced much. We have only had two rounds, and it is a new class and a new bike. I really need to put more hours in on the 450F. When I think about the first two rounds and how I was feeling, I was not even sixty percent. I did a very good job. I am very happy with what I did, like a fourth in the first moto at Valkenswaard. I had that crash in the second moto, but I could still come up towards the front. I was leading on Saturday too and ended up third with the fastest lap of the race. It was not too bad. I feel like next year can be very good, if I get a bit more time. We will see.

This is the thing though. You were not at your best at the start of the season, but I think people forget just how good you were. I don’t think you could have asked for much more, considering everything, and it just showed that you are going to be really good once you are at one hundred percent.

Yeah. I think that people don’t understand that, before the first round, I only had two weeks since the ‘Nations. The first week I was like 15 seconds slower than what I can ride, then in the second week I did two 30-minute motos to see if I could maybe race on Sunday. I didn’t ride! I went to the first round without riding. People maybe think that I was quite fit, but I didn’t ride at all. I did a very good job, to stay and get top ten. I am top ten in the championship – I think I’m eighth – and that is not too bad, seeing as I did not really train. I’m happy. Maybe people do not appreciate that, but when you are the MX2 world champion then they expect you to go into MXGP and try to be in the top three. I was there… I was close. Considering how I physically felt, I was really good.