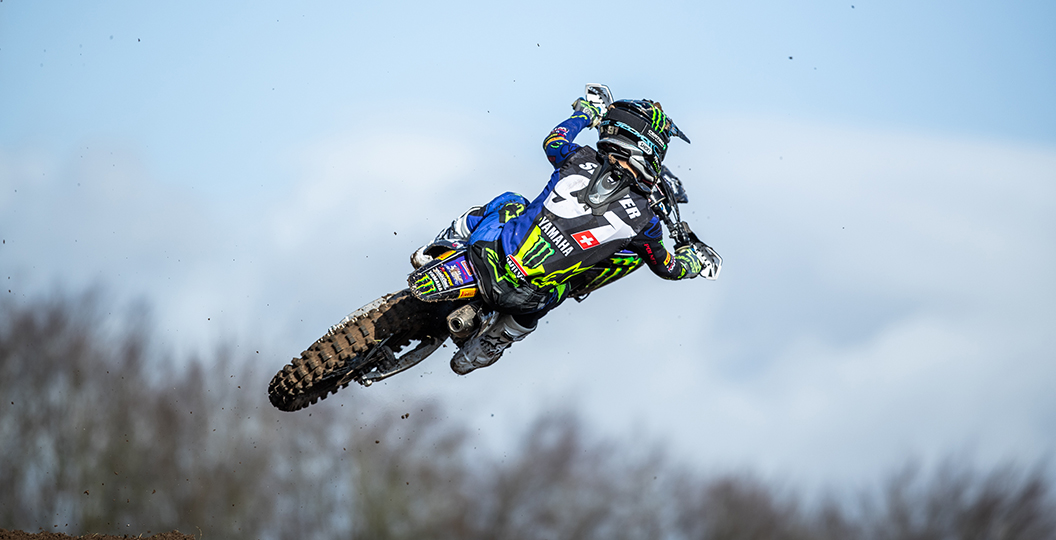 Jeremy Seewer was not talked about as much as he should have been in the weeks prior to the opening round of the 2020 FIM Motocross World Championship, but that will change now. Seewer immediately made his intentions clear at the opening round of the campaign, the Grand Prix of Great Britain, as he jumped out and grabbed a second in the first moto. A back-brake issue in moto two stopped him from standing on the podium and, proving that he is in a different place to a year ago, he was not happy about that.

MX Vice: I was happy that you did what you did in the first moto, because truthfully you weren’t getting the credit you deserved coming in. In the first moto you kind of proved that you are here. In the second moto you had an average start and didn’t really go forward or back. It was alright I guess, but you don’t look happy at all.

Jeremy Seewer: No. It’s nice to come in as the underdog, because this takes the pressure off, but of course I wanted to show, “Hey, guys. I’m here as well.” I think they know, especially after the first moto, and everything is going well. That’s also what I tried to do. I’m not here to finish eighth. In the second moto I had a great feeling on the track and everything went well.

I had a bit of spin on the grill. It was wet and tough to get the balance. I was still coming out fourth or fifth in the first corner, which was all right. I felt great. In the downhill down after pit lane right I took the second rut. Clement Desalle was in the first rut, and we just touched. That’s just racing – the ruts came together – but it just ripped off my rear brake. In turn two I had no rear brake. This was kind of a disaster.

You were f**ked at that point?

Yeah. I was like, “No way. This can’t happen.” I was just ready to fight for another podium spot and then realising you have no brake on a track like this with those ruts, where you always constantly use your brake to balance the bike in the ruts or on the jumps. I checked it in the first lap. I saw it was ripped off, so I just put my mindset to try to go with it and I managed to take good points.

It was still really good riding and good points, but I was feeling that good out there in the second moto. I was ready to fight up front and ready to get on the podium, for sure. Even the overall win would have been possible when we saw the others today. Tim made mistakes in the first moto and dominating the second one, but still I was up there. I’m really happy about one side and really pissed about the bad luck, but that’s racing and we have nineteen to go so we will see.

This is something I have been wondering recently: You rode amazing in China last year, because the pressure was off and you could be looser. How can you be looser like that this year, but from the beginning when you have got to worry about points and all of that? Do you think that just comes with experience and being more comfortable?

This is a tough question. That’s just mindset and mental stuff. You just got to think everybody has the same problem. Other guys have more pressure, like Jeffrey [Herlings]. He needs to win. If he gets third, nobody is happy with him. I’m also not happy anymore finishing third, okay, but it’s a little different. Still I try to prepare mentally for this. It’s just a whole thing behind. You have to build up. You just have to look left and right at the gate and you need to have something in your mind, whatever it is.

Whatever you think of the others and yourself, it needs to make you feel that you can beat them. That’s the most important. If you believe here, you can do it. Of course there’s loads behind it with all the training, how the bike is set-up, how that goes, how your confidence is… When this is all set, it’s all here. That’s what you asked me, basically, but I’m not going to give you my tricks. It’s all mental, of course.

Weird weekend with the weather. There was snow, hail and everything. I think that the track we ended up with though was the best Matterley we have had in a while, because recently when we have had dry weather it started getting quite fast and slick. There haven’t been that many lines. This was quite technical and pretty good.

The track was honestly not in good shape yesterday and this morning, because it was so hard underneath and still a bit slick and muddy. This afternoon it was amazing. The second moto if I would have had a rear brake I would have enjoyed it a lot. Even like this, the track was cool. I was impressed. The way everybody said today it’s going to be mud, I actually kept saying, “Come on, guys. It’s England. You never know.” You saw my butt patch! Can be one moment where we are feeling like we are in Spain, and ten minutes later it’s hailing. We had a lot of luck. The track was perfect, as you said. I couldn’t look for anything better for racing, I think.

You are in a really good spot right now, aren’t you? This is the first off-season that you have had in a while that’s been smooth sailing. You haven’t been ill or searching for a deal, so I’m guessing that you just need to keep on keeping on. There’s nothing really that you need to change or fix, because you are there already.

Exactly. This is my best start to a season in a while. I have everything done. I have a strong team behind with Michele Rinaldi’s crew being here. Wilvo are doing a good job already. It takes a bit of time to settle things, but I believe now after this weekend it will be okay. It’s not there yet, as I wish it would be, but I think it will be good in a few weeks. Bike is good. Atmosphere around is good. Like you said, I have a really strong base and I don’t need to freak out. This is making me stronger.

Michele’s group, are they going to be at every GP or just European ones?

Yes, everywhere, because that’s really what I asked for. This is also because I’m the guy. I’m the guy now at Yamaha. We are three riders and we all get the same support. We all get the same material. I was at Michele’s team last year. This is my difference. This is making my circle just a bit more compact, and that’s what I can take advantage of.