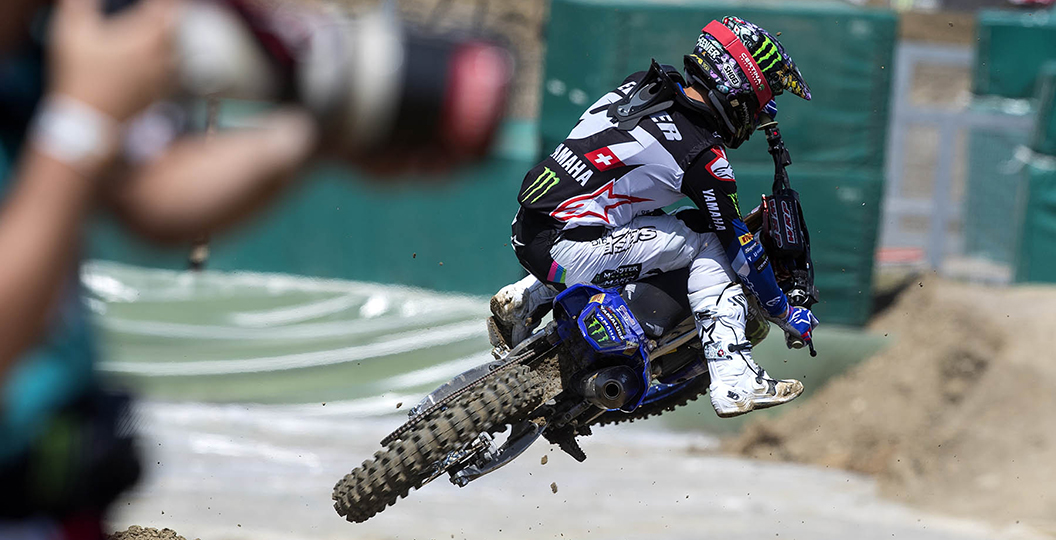 Jeremy Seewer has clearly been the second-best rider in the premier class for months now, as far as consistency’s concerned. There appears to be nothing that fazes him, as he has thrived on all surfaces and really cemented his charge towards the silver medal. The Grand Prix of Italy was another step forward and the closest he has come to standing on the top of the box. The only question that remains now is when will he get that monkey off of his back?

MX Vice: Good weekend and another big step forward for you. Like we say all of the time, you have just been slowly moving up. A good weekend. Better than mine, anyway.

Jeremy Seewer: Yeah, sure. Better than yours. The best result overall. It’s perfect. Another small step with the 2-3 moto finishes for second overall. Feels amazing. Even though I could smell the victory after moto one a little bit, seeing Glenn [Coldenhoff] winning and Tim [Gajser] being fifth to save his championship. I saw a little chance to win a GP, because I knew I could maybe beat Glenn. He was just strong both motos, because I was straight behind him at the start second moto. He was just faster than us. I ended up second, but I’m really happy to be that solid on every kind of track and also on this sh*t track. To be second is great.

Was that second moto frustrating? Obviously when you came out in second, like you said, the first thing you thought was, “Right. I’ve got to do this.” It didn’t really work out. Were you kind of riding around going, “Why isn’t this happening?”

Yeah, a bit. I was second. I saw Glenn. I said, “Okay, let’s follow him and see what he does.” In the first moto I wasn’t there with Glenn. I started P5 or P6. I had to make some passes to get second, but in the second moto I was right there. I expected maybe to follow. Second moto, like I said, I just tried to follow him and stuff. After a couple of laps, I just realised he was gone already. Two or three seconds and maybe half a second a lap. I ended up battling with Tim the whole race, which was fun too, but of course the GP win was gone. I’m still really, really happy to be on the second place.

When you were coming through the field in the first moto, I was watching you as you were clearly faster than everyone else you were battling with. You got to Gautier, picked him off and then went. I was watching the times thinking, “There is ten minutes left. Maybe he can make a run at Glenn?” I feel like you did a little bit, because when you got into second you gained a second a lap on him for two laps, but did you then realise that it wasn’t going to happen?

Yeah. Actually, I saw I gained a bit on him. He was also getting tired in the end, as he was pushing a lot in the beginning and stuff. Me, I could maybe push more but at a race like this the two motos are long. If you go all in during the first moto and you lose all your energy, it’s a lot tougher to recover. With these narrow tracks where you don’t have much wind and stop ten times a lap, because the corners are that narrow… It’s not easy. I realised he was too far, even though in the last lap he was right in front of me. He was also having a tough time, like everybody today. That’s how it was.

You are getting closer and closer to an overall win. You are clearly good enough, so it’s going to happen eventually. If it doesn’t happen by the end of this season, are you going to go into the off-season a bit like… Would it be good to get the monkey off your back now, so you can go into the winter kind of knowing you can do it?

It would be good, of course, but I have to always see where I come from. My goal this year was to be in the top five. Of course, as I said before, three top guys are injured, so five minus three is two. That’s where I’m at now if you take the calculations. This is in theory. In real life, it’s different. Today I felt like I was actually already pretty close to getting that overall, as you see Glenn winning with a 1-1, but there are three more GPs to come.

I keep pushing. I changed my mind a bit. The top-five goal has stepped up maybe to a podium goal. It’s close, but I’m not going to be frustrated as my season turned out a lot better than I expected after the beginning where I struggled coming from that sickness and stuff.

Good tracks for you coming up as well. You are pretty much good everywhere, but Uddevalla and Turkey… I think of those as good places for you.

I think they are, especially Uddevalla. I have some good memories there in the past. I won a GP there. Last time we were there I actually won the GP in MX2. I just like the place. Sweden, good people. There is always a good crowd… It is nice and relaxed. Love the airplane show on Sunday midday and stuff like that.

We’ll see about Turkey. I did great there last year, so I think I can perform there as well, even though it’s not one of my favourite tracks. It’s not that old-school motocross track. Anyway, China will be a completely different story or a new story for everybody.

I guess we need to talk about this track. One to ten, how would you rate it?

Three and a half. No, I think it’s too much… I do think for what they have here available in this place, they did the best. You cannot do more. What you expect? The point is with all the concrete it’s first of all really dangerous. If you make any small mistake you end up on the concrete. It’s not nice, of course, and also the rhythm is so slow. The concrete heats up, especially today with that weather.

I almost felt like it was worse than in Indonesia where it was warmer, but with all the concrete around it’s just killing you. Then those narrow tracks… Everything comes together to make it not fun. Even I think to watch it was… I don’t want to see myself on that track. You cannot push. It’s like kind of enduro a little bit. At the end of the day it’s the same for everybody anyway. We cannot change it. We have to accept it and go on with it. Anyway, make it happen.

Did you feel like the changes they made for this year were better than last season? I feel like they tried to slow it down by adding the little chicane and stuff. I don’t think it really worked, but they tried.

They tried. Some places were better and some worse. Overall, I think quite similar. You can discuss about this, but it’s the same story in the end. The lap time I think was maybe a little… Three seconds slower, I don’t know, compared to last year. Like I said, you cannot make more out of this place. It just should go to a place like… I don’t know. They have great tracks in Italy all around.

Friday your deal for next year was announced, finally, because everyone has been talking about that. Back to Wilvo but you are still going to have the support from Rinaldi and this crew that you are working with now. That is good. You are changing teams, but you’ll still have familiar faces around.

Yeah. This was the key thing to stay with Yamaha. First of all, they believe in me. They want me to be the guy. They believe in me. They are behind me and this is what changes the whole story. I can be the guy kind of leading it a little bit. In any other team, the top riders are already set and that would be a different story. The most important thing for me was the Rinaldi crew being in the background. Everybody can see from outside how happy I am with them and how good it works. With everyone who is involved there it’s the best team I have been on so far.

They really know what string they have to pull at which time. This is amazing. That’s important to have in the background in the future. I think only a few guys are like Michele Rinaldi still. It used to be Sylvain Geboers with the same character. Michele Rinaldi and maybe, I don’t know, [Claudio] De Carli? I have no idea. I don’t know him, but that’s what I think. To have Michele Rinaldi behind me is the most important thing for sure.

Can you believe how many people thought you signed for HRC? It’s crazy how stuff gets around. Websites were changing the colour of your bike to red. Everyone was saying, “Yeah, he’s definitely going to Honda. It’s done.” It just goes to show that you cannot believe these sh*t rumours.

Yeah. I can only laugh about it, because I of course know the true story. It’s true they were interested. It’s true I had an open ear to listen and stuff, but at the end of the day it never even came close to getting a deal done there. Just because they have Tim [Gajser]. He got the world championship today, so of course the whole team is following Tim. He’s been on a Honda for five years. I don’t mean this bad, but if I’m in there I’m going to clearly be the second rider.

I’m going to be the guy who they don’t want to spend the money on and the guy they want maybe to do good results, but not if he would start to win. Maybe it’s not nice. That’s already a bit the wrong mentality if you want to win, because you need the crew around you believing you can win and wanting you to win. That changes the whole atmosphere. This is just already the reason why it never really came to numbers on the paper or something.