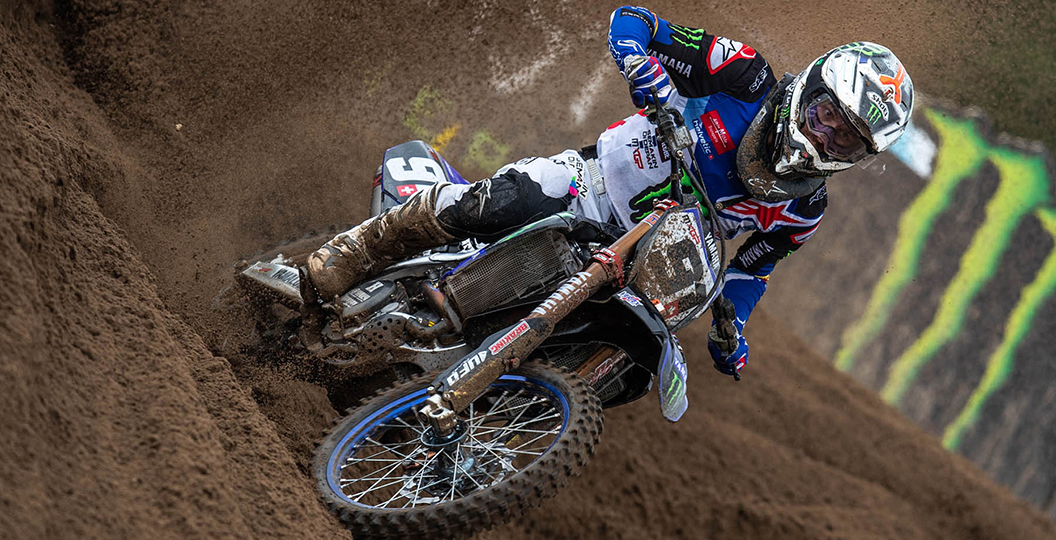 Although Jeremy Seewer didn’t stand on the overall podium at the Grand Prix of Belgium, like he has done at the previous three fixtures, he did bag some solid points and walk away with fourth overall. The ranking strengthened his bid for second in the premier-class points too, so there were plenty of positives to pull. The fact that he was one of the first guys to hit some of the biggest jumps on the track can be added to that list. Seewer can do it all!

MX Vice: Another solid weekend. Obviously not a podium this time around, but fourth overall on a track like this that can kill a guy… It’s not bad. It’s definitely good for the championship. I guess you are leaving here happy.

Jeremy Seewer: Yeah, exactly. Like you said, can kill a guy. I had some moments today as well as everybody. I think there is not a rider who can say [they are] leaving Lommel without any moments. That’s Lommel. It’s so gnarly, especially this weekend. With the rain on Friday it got really deep, hard and had steep bumps. Last year it was drier, so the bumps got longer and more fluent. Now there is really no rhythm. Tough. I enjoyed it. I loved it. My set-up was okay. I struggled a bit, but we made it work today.

I’m happy to leave fourth. Glenn [Coldenhoff] deserved the podium today. He was stronger. I was off on the starts, because my reaction was just bad. The first moto, I slept. Then I caught actually back up and I ended up fourth or fifth after the second corner, which was really great. In the second moto they took forever to release the gate. Shaun [Simpson] next to me went. The other guy on the other side also went. I just lost focus and slept again. All I have to say and to add was I had the worst night of my life.

For some reason I did not sleep all night. I don’t even know why. My body was just active. I don’t know what happened. I was just awake until 02:00 and woke up at 05:00 again. Just a disaster and not what you want in front of Lommel. I guess I caught up some sleep at the start gate. I’m happy to be fourth overall, even though a podium is always nice. Thinking about the big picture, I took really good points. This is important. Like you said, I’m in one piece.

Qualifying race was sick. You were really fast and really on it. Your countryman, [Arnaud] Tonus, was kind of in the way a little bit. We could have done with him moving to the side, but that was still a good glimpse of what you can do in the sand.

Yes, it was. I felt for some reason really good yesterday from lap one. My time-practice lap was almost the quickest one and I had a huge mistake in there, which cost me about a second, so I would have won that one if I didn’t make that mistake. The quali race felt great. I pushed a lot. Arnaud was in the way. I made kind of a beginner’s mistake, just following him for laps and laps.

I got completely full of sand, just covered and lost all my tear-offs. The bike even started steaming, because the radiator was closed full of the sand and there was no more cooling. I just should have waited a bit and then make the pass at once, but I think everybody struggled on him for some reason. I knew this didn’t matter, which place I was going to start from on the gate, so that was alright.

I’m going to hype you up a little bit here. You were sleeping on the start of the first moto, then maybe on the second lap once you got into fourth you were going. You were the fastest man on track for a few laps in a row. I was genuinely looking at it like… You were nine seconds down on whoever was leading. I was like, “Here we go. We might have a winner on our hands.” Did you peak too early? Even at that time, hearing that, is that surprising? Did you feel like you were motoring at that point?

I didn’t think about that at all, because everybody around me told me I just have to stay calm and that it’s a long race. That’s what I tried to do. Relax and go. I did the best lap times. I think the other guys had the same in mind, but I was a little bit too tight in the first moto. I lost my momentum there a little bit. I made two or three good passes. I passed Gautier [Paulin] and someone else I think pretty nice, clean and immediately. I didn’t lose anything. I got some good laps in, but it’s a long moto.

I caught up to Glenn almost at one stage, but he kept going in the last two laps again. I have to say the first moto was demanding. Not that I fell off the bike, but it was really, really tough. Then the second moto, I was even calmer. I went less intense but more fluent on the track, with more flow. I actually had more fun. I didn’t get as tired as in the first moto, for some reason. It felt more like a recorded ride, if I can say it like that. Now I actually feel quite okay, because after the first moto I needed some recovery.

You guys all started jumping over the single before you came back onto the start straight today. How did you figure that out? Did you see one guy do it in warm up and then follow him? I guess they worked on the take-off a little bit overnight and that allowed you to get all the way over it?

To be honest, I jumped it pretty quick yesterday in free practice.

You did it yesterday?

Everyone said that no one did it yesterday.

I watched the quali race and then there was the commentator. I didn’t know who it was. Who was it next to Paul [Malin]?

Okay. He said, “I’ve never seen somebody jump that before.” I did it in free practice, third lap or something, when it was flat.

Maybe, because I also quadded yesterday out of nowhere.

What? I’ve asked people as well and they said no one was quadding.

I did. I did once, but this they knew. I just started my time-practice lap. I came around the corner well and I just thought, “Let’s keep it on,” and I quadded pretty nice. Today that was far from possible. I think this morning AJ tried, but he crashed big. I knew first lap of warm up… I checked it out, but the ramp was f**ked and the landing was sketchy. I said, “No way.” Yesterday I did it in my fast lap and also the one you mentioned onto the start straight… Free practice, third lap.

The X Games is running at the moment, so maybe you should be over there. Was the jump onto the start straight sketchy? You were getting quite a lot of height off it and if you cased it, it was pretty hard. Then if you went tabletop and single, the little pocket in-between the two looked gnarly. It looked like it was a proper square-edged hole.

To be honest, when you got the momentum to jump it this was the easiest. You needed to put in a bit of energy, but once you took off you could rest and jump. It was nice. Not to jump it, like you said, but that hole in-between… It wasn’t too deep, but it was square-edged and hard. It wasn’t really sand anymore. We kind of hit the bottom. Then the suspension goes completely through, so it brings you a bit sideways.

It’s so slippery and hard down there to get kicked. I saw one or two big crashes yesterday there in the European races. It’s quite sketchy, but to get over it was easier. Lap-after-lap it got more difficult, because the up-ramp had the sand waves and stuff. I cased it once in the second moto, but it was alright.

No. I just took the corner every lap the same. If there was a lap where maybe your rear slid a bit, you had to say no. The next lap you just take good momentum, shift to the next gear, keep the front high and you send it. Seat bounce, actually, and then you made it. One lap I got a bit sideways right before the take off, already having the speed to jump, but then there were ruts coming.

My rear wheel kind of went in the other rut and I just shut off, because I couldn’t send it this time. Shutting off made me save this and just jump less far. I actually just landed right in the deep hole, luckily on my rear wheel. It was all fine, but stuff like this happens in Lommel.

You cannot say too much, but there has been a lot of talk about you for next year. We cannot say anything, but you are done and happy. That stress of trying to decide and all of that, that has gone away now.

Kind of yes. We sorted things out quite okay now, which is fine. Still there are a lot of question marks, even though we are going into a good direction. Many changes and stuff like this. There are things I’m not happy with, of course. I have to say right now it’s an unbelievable team I have. I feel so good with everybody. They do such a great job. The mechanics, their experience… Just everything. It’s kind of hard to know you are going to lose this. After China, it’s over. It’s not going to be the same next year. I tried to put it all together as good as possible for the future.