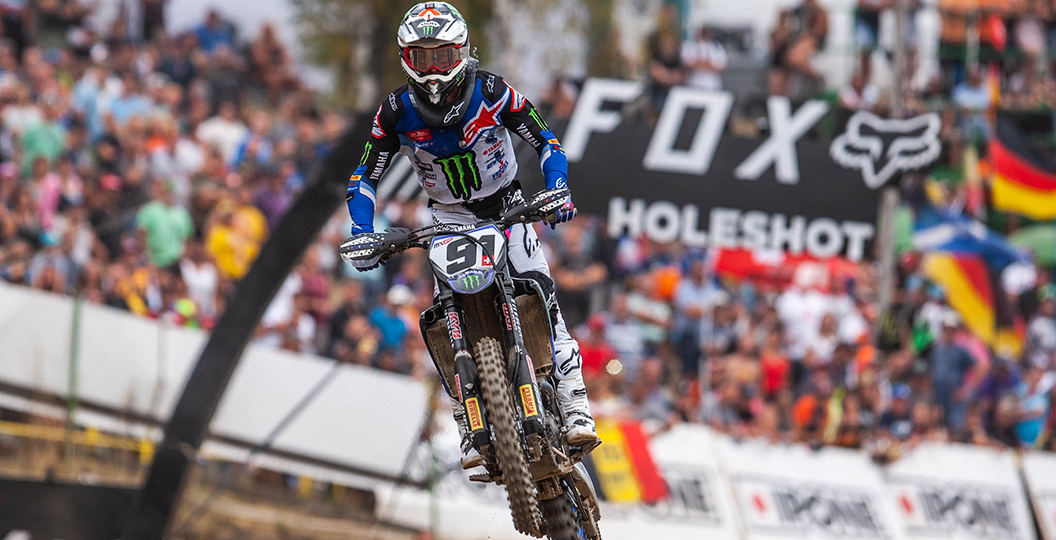 Jeremy Seewer has quickly transformed into a consistent podium contender in the premier class, so naturally attention is now starting to turn to the top step of the box. Seewer edged closer to that at the Grand Prix of Czechia, as he battled with former world champions at the head of the field and secured third overall. The finish tightened his grip on second in the title chase as well. Everything is certainly heading in the right direction for ’91’.

MX Vice: Another podium. Even closer to a win this time, so we are still going upwards. The results are not changing. The riding is definitely on the up though, which is good. Although at what point do thirds and seconds get a bit boring?

Jeremy Seewer: Yeah. I’ve had a few podiums now and some of them were a bit lucky, because riders struggled in one moto and I went 3-4 and stuff like that. I still ended up on the podium. This time I was securely third two times, which made it the best result so far. Two podium finishes in the motos. I have to say Romain [Febvre] was really, really quick the whole weekend. From session one he was in the game and he is fast on this kind of track. Maybe I could have held off [Tim] Gajser, especially in the first moto, but he just had some better lines in a few places.

I actually started to change a bit after he passed me, as I could catch up and follow him quite a bit again. The riding was definitely pretty good, except that one guy standing out this weekend. He deserved it. He rode well and made no mistakes. The best thing about the weekend? I pulled three holeshots. Especially in the second moto, I think I holeshot by about two whole bike lengths. This was amazing. I kind of felt like Jorge Prado!

It is amazing to finish like that at Loket, because I struggled yesterday morning with the track. I just took my time, let’s say, to get confident. I didn’t want to risk too much too early, because it is so sketchy especially on the 450. We have so much power and the track here is just so slippery, so you have to make it work somehow. Thankfully I could. The starts are the key here. I had them for sure. That is the main thing.

You said that you changed a few things after [Tim] Gajser passed you in that first one. Was it some different lines you noticed? There wasn’t that much stuff you could do different out there.

You could a few. At Loket there has always been about three, four or maximum five key spots to get it right. If you get them right, you just have a completely different rhythm. If you don’t get them right, and if you struggle with one or two of them a bit, it just kind of breaks your rhythm.

If you have two slides per lap where you lose your rear or get a bit sketchy, not close to crashing but just sliding away, it makes you uncomfortable and being uncomfortable you lose the flow, because you start to tighten up a little bit. This you have to avoid by having the lines where you can keep the flow. This is what I changed. Just two or three small things. I managed to do better after.

I feel like the difference between you finishing third this weekend and first was literally the smallest little tick. Even at the start of both races, you were giving Romain all he could handle. He was trying to pass and had nothing for you. I don’t know… Maybe you have got the little tick for half the race and you just need it for the whole race?

It is true, especially the second moto. He took quite a while until he passed me. This makes me…

He got close too!

Yeah. He almost got me, then not on another lap and stuff like that. Yesterday already too. In the first moto he got me quite quick, because I made a mistake and stuff. It feels good to fight with the MXGP winner. Tim Gajser, he passed me with only three laps to go in that first moto too. He has the red plate, and is quite close to a world championship title, so it feels good of course to be up there in the game. I still think a little bit is missing, like you said, in the second half of the moto just to make it happen and beat those guys as well.

The holeshots. I don’t feel like you have been that good a starter. If you look at the other rounds then your starts have been good, but not that good. Where the hell did those holeshots come from? I think you got a holeshot at Semarang, but that was it all year. Where did this come from?

In the beginning of the year we had good starts, but not wow. We were just with the front group like top five, top eight or top three. Quite consistent. Good, but not at the holeshot level. We started to have the new engine, 2020, in Mantova. I knew while testing, because we measured lap times, that this is better. I have had better starts since then. Since Portugal basically my starts are always top four on average, let’s say, or top five for sure. Not holeshot level either though.

Now since my first holeshot at Semarang, I keep getting holeshots. I have no idea. Maybe Loket is just a track that is fitted perfect to my system, to my start style and to my kind of bike power delivery. Maybe in Lommel I am going to be third at the start again. I have no idea. I’ll try to keep doing this, of course, but sometimes you cannot explain why it happens.

This was the roughest Loket we have ever seen. Every rider seems to say that. Do you agree?

Yeah, it was quite rough, but nicely rough because we had a few GPs where the track maintenance was a bit limited. They did a great job in Loket. Everybody knows Loket is a bit sketchy and stuff, but they made it rough and somehow rideable. Some parts of the track were never as rough as today. I remember in the past some parts of the track were rougher than back then. At the end of the day it is always a little bit the same, but I enjoyed it. It’s not my favorite track. I think nobody’s, but I still think they did a good job with that.

What about the little doubles and rollers and stuff they added in? Did that make a difference and make it any better or worse?

Better. I think everything they added this year made it for sure better. After the finish line, that split lane was awesome. Then after the downhill, right after that left, the single-single stuff was really technical. Before the finish line there was that uphill after the start and then that double, which was pretty cool. I actually double-singled in the first moto. I think [Gautier] Paulin did it yesterday maybe, but today I have not seen anybody else [do it]. Just up that hill, everybody went single and then double. I just doubled in and singled out. It was pretty cool. Not any faster. I think they did great with the changes for sure.

Yeah. in the past I have had really good years in Lommel, especially back with Suzuki. I was close to a GP win there in 2016 already, battling with Max [Anstie] who was on a high level in the sand back then. He only passed me with about three laps to go in that second moto, which was really close. Last year I had my best results all year at Lommel, finishing fifth and sixth I think, with all the main names in there.

Every year it’s a new story, so now I just hope I can make it happen. Lommel is always going to be really rough and bike set-up is important. We have not had any big sand races except Kegums. I’m a bit curious about how the bike handles and stuff like that. Suspension-wise it is day and night to here. You have got to get comfortable with that, then I think we can make something work. We will find out.

Random thing I’ve just thought of quickly… You were on a Yamaha last year, but a different team. Does all of the stuff you learned last year with settings carry over? Can you say to your team now, “Last year I was doing this?” Does it not really apply? Same bikes, of course, but are the teams that different where you cannot really do the same stuff?

Actually, not at all for some reason. My bike is completely different to last year. We have factory parts. My whole set-up, starting from the handlebars and footpegs… It is so different that I cannot compare to last year. I could not say last year at Lommel I went to a forty-eight and let’s try it this year. It doesn’t work, because it is a whole different system.