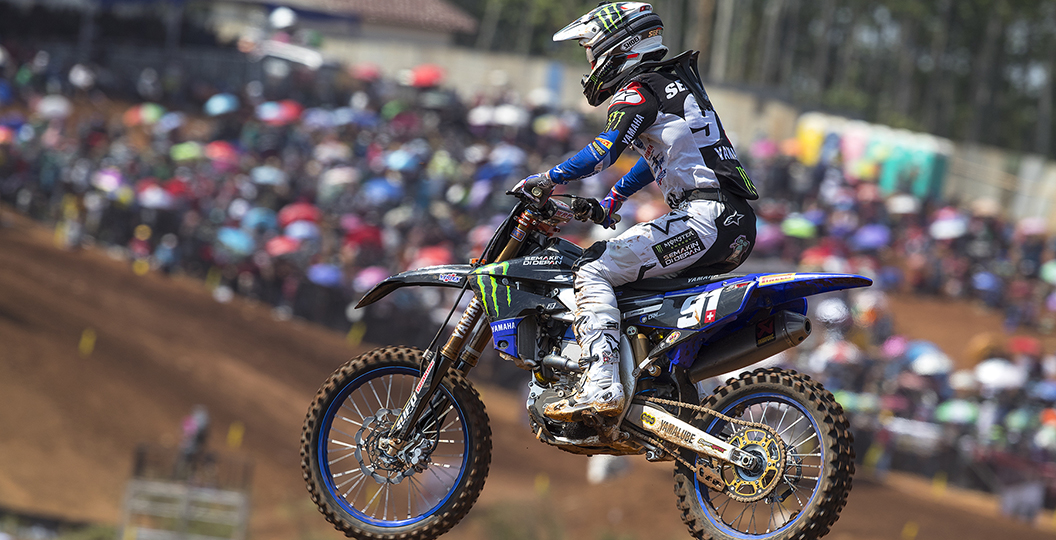 It is crazy to think that Jeremy Seewer had never stood on the premier-class podium two months, because now he has become a regular up there and can begin to set his sights a little higher. Seewer tasted champagne for the second week in succession at the Grand Prix of Asia, Semarang, this past weekend and discussed that in this exclusive MX Vice interview, as well as dabbling in surfing and the mounting pressure to make a decision about 2020.

MX Vice: Another podium. Like I have said a million times, this is normal now. We expect this from you. I think this could be your best round of the year though. I felt like you were going to win at one point, which is a change.

Jeremy Seewer: Yes. My speed was really good. I had really great starts, today as well as the last couple of GPs. My pace is there. My fitness is pretty good, but I can improve on some points still. I am really happy with where we are, especially on this track that was really tricky. You need some trust in your bike, especially on the 450 with all that power to find traction. I struggled a bit yesterday.

I was just too safe. I was a bit stiff and too tight. It is so slippery out there and a small mistake can cost you a lot, so happy with today. Good pace. In the second moto I lost two spots in the end, but I knew I was going to be on the podium and I just wanted to go home healthy. Every slight bobble I had, I just shut off. I was playing it safe. I tried, of course, to be second, but I took good points and in the end the championship [is what] counts.

You say you were tight yesterday and you maybe did not perform the best, but you were the fastest in free practice. Again, that is a good thing. That is a step in the right direction. The reason you changed so much is the track, right? Across the weekend it just changed a lot.

To be honest, the track was the best yesterday morning. The grip was everywhere there, so you could trust the bike. I felt great and had the best lap time and stuff. That has never happened before. It was nice to see my name on top of that 450 class. Some guys are injured, but that is racing. Then the track started to change though.

Yesterday afternoon I think they struggled a bit with the maintenance of the track. They tried to do better today, which I think they did. The track was still sketchy, to be honest, but a big improvement compared to yesterday for me. This is awesome. I think the surfing was the best practice out there, so it helped. I’m happy for sure to go back to Europe like that.

I asked you exactly the same question last week, but we will do the same again. In the second moto you were following Tim [Gajser] early on. Did you see anything? Anything you learned? Anything you picked up on?

Yeah, I tried. I wanted to see what he was doing, but he is not that special. I think he is just slightly on a higher level, a bit with his fitness and with his corner speed. I also saw today he does mistakes. He did a couple. I caught back up when he did mistakes. I also did some, of course, but where Tim is really strong is just keeping his pace until the last few laps. Us guys, we are quite fast in the beginning and then we cannot keep going. That’s why I tried to take it step-by-step and get closer to him.

Do you feel like you are properly at one hundred percent right now or is there still more give? That is obviously exciting, if there is, because the only way to go is wins.

Yeah. I think we will never be at one hundred percent, because there is always something. I’m feeling really good at the moment, but I think there are always ways to improve. It’s getting smaller and smaller and harder and harder to find more, because we are at the top of the world, but still I try to analyse to get better, to be good there and just to make the whole process as good as possible.

Everyone has kind of said the same thing and I guess you will too. This is a good track for Indonesia. If we are going to come to Indonesia, we are probably not going to get better than this layout. The dirt is really letting this place down though. Something needs to change there.

Yeah. The track is amazing, the layout, the rhythm and the jumps. Not too big and not too small. They made small changes from last year, which were better. You could pass on some spots. It is just the dirt. I have never seen something like that before. Gaildorf, I don’t know if you know that track, but it’s a bit in this direction. That is also clay and hard, but it’s far off still.

It’s unbelievable. It gets like ice. It’s rock hard and on some places grippy as hell. It’s really, really tricky. Many times during the motos your foot pegs get some clay and you nearly cannot see your footpegs anymore. You try to get the grip back. It’s such strong material, I think you could build houses with that stuff.

Yeah. You cannot compare at all. There is not one rock here, nothing. Nobody used hand guards today, because there was no roost. Nothing, for some reason. I think you only find that here. There is no place like it in Europe, nowhere at all.

You tried surfing this week and, typical rider, all you have got to do is try something new and you are immediately good at it. That happened on a surfboard. You pretty much showed up the professionals straightaway.

Yeah. I surprised myself. I was kind of scared. If you do that alone, you don’t mind if you crash ten times. One of the best surfers in the world was there though and if I would struggle all day he would think, “What a guy!” It was a lot of fun. A completely different thing: Different lifestyle and different mentalities. I had a good discussion with him.

It’s amazing what these guys risk as well. It’s brutal surfing waves for twenty minutes. Even I caught a wave that is half a meter and got upside down, I think, and these guys are on waves that are twenty or thirty meters high. Hats off for these guys. I enjoyed it. I’m for sure going to go back on the surfboard one day.

Every single person I have spoken to this weekend has said, “What is Jeremy going to do next year?” Literally, everyone is talking about it. You obviously don’t know, but is it tough to focus or put that out of your mind? If everyone Is saying it to me, I’m guessing they are saying it to you as well.

Yeah. The discussions are getting big now. To be honest, it is quite easy right now to put it out of my mind. It’s a really positive kind of problem. I am at the right time, the right spot, have no contract, am showing off good results and second in the championship. Nobody else is as young as me with no contract. From MX2 many are coming, but they will kind of struggle I think because it is tough to go to the MXGP.

None of those riders were on your level when you were in MX2 either.

Yes, exactly. I think as a top ten MX2 rider or top five, it is already tough to enter MXGP. It’s a positive problem, so I put it out of my head. Even though now it is going to be time, in the next two weeks, to make a decision and see in what direction my future is going to go. Definitely I’m in the right spot now.