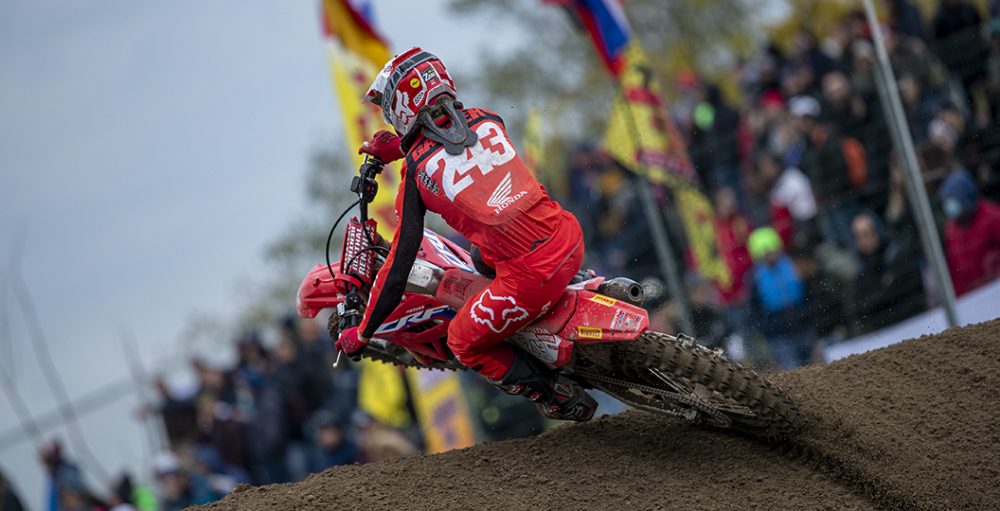 The title fight in the 2021 FIM Motocross World Championship reached a turning point earlier today. Tim Gajser, the rider who has captured the last two titles in the premier division, got handed a five-place penalty at the end of the first moto. Gajser got bumped off of the track exiting turn one and entered the track after the exit to turn two. Although he slowed down, the FIM deemed that he did indeed gain an advantage (the penalty was for four spots that he gained plus an additional position). The official word on the penalty is below.

“Loss of 5 positions penalty for accidentally leaving the track and gaining an advantage.”

It was a significant blow for Gajser, who went from third in the moto to eighth (a difference of seven points). A third was then secured in the second stint as well. 15 points is the difference between him and the championship leader, Romain Febvre, with one round remaining. Gajser is 12 points down on Herlings in the runner-up spot. It is not impossible for him to leapfrog both riders and gain his third title in succession, but he’s going to need some help.

“I am very disappointed with how today turned out,” Gajser said in a statement from Team HRC. “In race one, I got hit by another rider and that caused me to go out of the track and, because of the way the track is designed, the safest place to get back on is where I went. I believed I was just outside the top five when I went out, and tried to re-join in the similar position, so as not to gain an advantage, but when I finished the race in third I was told that I had a five-position penalty. It is not nice to have to try and come back from that when the championship points are so tight.”

Echoing those thoughts, Marcus Pereira de Freitas confirmed that such a decision was difficult to accept. “He got bounced out of the track at the start of race one and we feel he re-joined the track as close as possible to the position he went out, but unfortunately he got a five-position penalty and that really hurt his chances of scoring good points,” the HRC General Manager said in the same statement. “He was still able to finish third in that race but after the penalty that dropped him to eighth, losing him seven valuable points in the title race. It is tough to accept when the championship is so close but we know Tim will keep battling until the very end of the season.”

It is impossible to predict what is going to take place at Wednesday’s Grand Prix of Citta di Mantova, as so many surprising elements have been thrown into this title fight. Would it really be a shock if Gajser is suddenly closer to the red plate after the penultimate moto of the season? Perhaps, but do not rule it out.