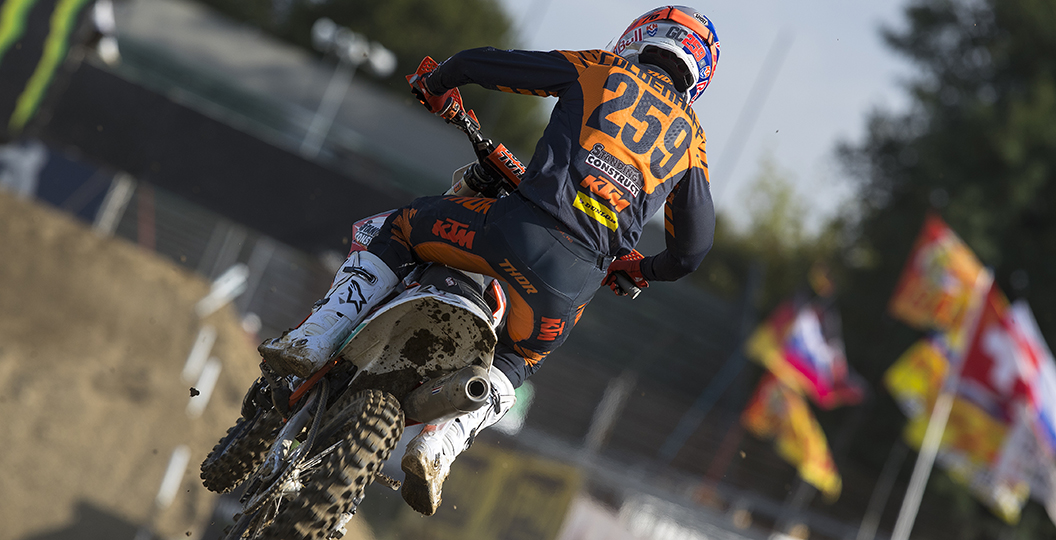 Following Glenn Coldenhoff’s phenomenal performance at the Motocross of Nations a year ago, most expect him to win races now. The clean sweep at the Grand Prix of Italy over the weekend was more of a shock than most realise, however, as he had only stood atop the podium twice before that. Coldenhoff reflected on the memorable day, as well as some other hot topics, in this exclusive MX Vice interview from the road-race facility.

MX Vice: There is not much to say. A dominant 1-1. It looked like someone could push you each time, but they just did not. You killed it in both motos. A perfect weekend and your first like that in MXGP, because Latvia in 2015 was not perfect. That is cool.

Glenn Coldenhoff: It sure was an amazing weekend. I felt good yesterday and I knew I had the speed. I felt like I could win, because Tim [Gajser] was riding for the championship and he made a few small mistakes. I felt good out there today. I had better starts today than I had yesterday. What can I say? It’s been amazing. The last time that I went 1-1 was at ‘Nations. I think today was a similar performance. There we had a bigger gap on the third guy, but I feel like MXGP is still stacked these days. We are missing three top guys, of course, but still that’s also racing. I feel like I have come a long way. It feels really good to be back up here.

Towards the end of each moto, was it quite hard to stay concentrated? Were you thinking, “Oh, sh*t! I’m actually going to do this. Don’t mess up?”

Yeah. Actually, first moto I got a bit nervous. I was watching two of the guys behind me and I could control but in the end of the first moto I was a bit tired. Then I made a few mistakes and I saw [Jeremy] Seewer was closing in. I finally made it until the end. I think that second moto was definitely better. I pushed really hard in the beginning and had a solid gap. Every lap I extended it a little bit. From one point I could control it and bring it home.

It looked perfect, but were there any sketchy moments that we maybe didn’t see? Any points where you felt like you were going to headbutt some concrete?

No, no. Second moto, no. First moto, I made a few [mistakes]. Hanging with my legs loose and then definitely a few things where it was a close call, let’s say. That second moto was actually without mistakes. It was definitely a good moto.

You are Dutch. You guys are typically good in the sand. You are good on hard-pack as well, but this… If I’m thinking of a Glenn Coldenhoff track, I’m definitely not going to pick this place. What clicked?

I don’t know. I also really don’t like this track and normally also don’t like the ground, the dirt. Today it went easier than expected, of course. I don’t know what happened, but I felt good. We made some changes with the bike, of course, some small changes before Lommel that made me good and happy in the sand, but it’s also working on hard-pack I guess.

You said you didn’t like this track. What about compared to last year? They obviously made a few changes. I feel like they tried to slow the track down, but it didn’t really work.

Yeah, I think this year was a bit better. It was bumpier with more lines and ruts. You had to look for some good lines. I felt like I had some good lines out there and was just smooth. It was definitely technical, but that’s how it like it.

Everyone is talking about next year at this point. I’m guessing you are absolutely stoked to have a two-year deal. That’s like the best thing ever right now.

Yeah, that’s unreal. It’s pretty sad to see all those guys struggling to find a ride. There are definitely not enough spots for all riders. For example, Max [Anstie]… It’s definitely a hard time for him, especially now with his injury. I hope he gets well soon and also my other teammate. It’s definitely hard and, as you said, I can be happy that I signed for two years and now the results are coming.

I feel better on the bike. For myself also, it’s a good confidence booster. We still can work with the bike, but I feel like we have a real solid base at the moment. For next year to keep the same bike, same suspension, same guys and all of that is definitely going to help me. I feel like I’m in a good spot right now.

It’s kind of late to ask this question, but coming from the factory truck to here… Were there any limits that you felt you had? Obviously, this isn’t a full-factory team. There is amazing support, but was it a little tough to get used to in a way? Maybe you don’t have as much freedom?

No. I get all the freedom I want. I rode for those guys in 2013 and I was really happy that year. Even the same this year. The team has done an amazing job. They work so hard. Compared to a factory team where you have a lot more guys, this is a smaller group of people who need to do the same amount of work. That means they are working their ass off. If you get a good result like now today, if you go 1-1 then it’s a big reward for all the guys here.

What are we doing with the Dutch ‘Nations team? You are in and [Jeffrey] Herlings is in. We know that. We are not stupid. We can guess that. What is going on with the MX2 spot?

What do you think?

I have just spoken to Calvin [Vlaanderen]…

Who we need to take?

I feel we need to know what you think.

On Tuesday, we have a press conference and then we will explain what the plan is with ‘Nations. You will see there.

I guess at the end of the day, as long as you do what you know you can do, and Jeffrey does the same, it’s not like the MX2 guy is going to make or break this team.

No, sure. For me and Jeffrey, it is the same as last year. The MXGP guys, they need to make it happen. We just need one result from the MX2 class. I feel like we have quite a lot of good sand riders. [Roan] Van De Moosdijk is doing good. It looks like he’s going to wrap up the title next week. Still needs to be done, of course, in Sweden. He’s good in the sand. Calvin is very good at the moment. At Lommel he got a podium, a second place, so I think we are in a good position.