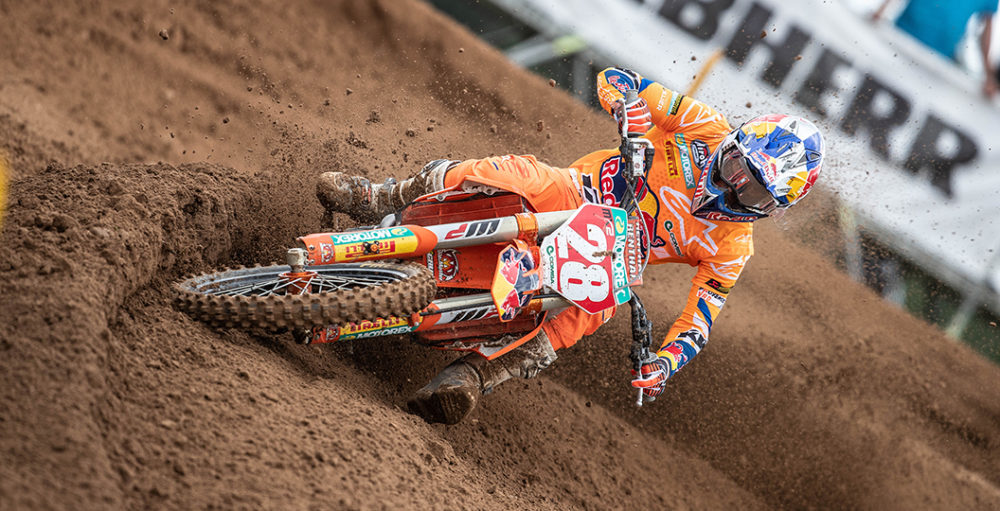 Dirk Gruebel, the man in charge of the Jeffrey Herlings portion of Red Bull KTM Factory Racing, is always an insightful interview. This chat from the Grand Prix of Riga on Wednesday is no different. Gruebel breaks down the way that Herlings rode, why he was looking behind more than normal and what the team strategy is moving forward. The one-day format is also discussed, as well as the future of the FIM Motocross World Championship. There is a lot of information packed into this exclusive MX Vice interview, which was originally published as a FLY Racing post-race podcast.

MX Vice: A bit of an up-and-down day for your side of the Red Bull KTM team, but a massive positive is that Jeffrey [Herlings] has pulled out a lot of points. Tom [Vialle] lost points, but I feel like it was a strong showing from him from a mental point of view. Rene [Hofer] obviously hasn’t ended up very well, so that’s a bummer.

Dirk Gruebel: Yeah. You could see Jeffrey had a completely different approach. Even in the first race again, not so good a jump off the gate and then he was involved in a start crash. He back from eighteenth or whatever he was – it does not help. It is hard work and hard to pass. The guys up front, the first five or six, are really within half a second lately. It is really tight competition. It’s tough to break through that, but he did it to a certain point. Then in the second race he had a better start and ran up front, then even messed it up. It’s not over until it’s over.

Even champions still do some mistakes. It was still a massive points gain, because of the mistake of [Tim] Gajser. We said before that however you start, it’s really important that you finish every single moto and make the points. If you have one DNF, you are probably out. You cannot make up. Who knows how many races we are going to have left with this situation? Tom had a really strong performance on Sunday. Today he struggled a bit the whole day with the track – he was not happy. I don’t know. He just couldn’t find the speed. He said he couldn’t run with the top runners, but he gave his best.

Two times fourth, so he got solid points. He lost points, but still the mindset is right. The goal is there. It’s all good. On Rene’s side, there was a crash in the first race and then the second race looked promising – he was making up ground. He was like P8 and riding good, and then disaster struck there. He had a big get-off. It seems like he broke his shoulder. He is now on the way to the hospital, so they need to analyse it to really see how bad it is and how he can continue there. It was a huge setback for him. That’s clear.

You said Tom just wasn’t gelling with the track. Obviously he was ninth in qualifying, so was it already kind of going in that direction in his mind? Was he almost going into the first moto a bit like, “I don’t know if I can do this?”

No, I don’t think so. In the first race he was leading, but they just caught him quick and he couldn’t run with Jago [Geerts] today. Jago was the faster guy today. The Kawasaki guys stepped it up, it looks like. They are licking blood there and got the taste for it. They rode well. I think he still could have got [Mathys] Boisrame back, but he was as finished as him. There was a lead of ten seconds over Tom and in the end it was three and a half or four, so if he had some juice left he could have got him back. Better to stay fourth than on your nose with no points at all.

I’m still impressed with Tom for that reason. If you look at the points, we are eight motos in now and he is the only one who has been in the top ten in every moto. That’s how you win championships. You’d much rather him continue in a consistent way than win today and then crash out on Sunday.

That’s the thing. We told our riders take minimum risk and maximum points if possible, and that’s what they keep doing. They are doing a good job so far. We still have both red plates, and that’s what we are here for.

What about Jeffrey’s races? He is coming off of that concussion, which I can’t quite figure out how much of an impact it’s having. Axel was really good and his heart rate was really high in the second race there, which you cannot do with a screwed up head. Then also he was looking behind and he crashed when leading, which he just doesn’t do. Can you think of any reasons for this?

Well, there are certain riders he’s comfortable with. If Tony is behind him then he doesn’t look back. He knows what Tony does. Tony is predictable. They have raced together for so long already. They don’t do crazy stuff, but there are some guys out there who are still younger and wilder and he doesn’t know what to expect from them. You better have a second look where they are. Even if we always show him on the pit board, he wants to know it himself it seems like and today it led him to that mistake. If you turn your head and you hit the rut a bit stupid, you take a ground sample. It cost him the win today and for sure it’s a steep learning curve.

What do you think about being here for a week? We are two races in now. I imagine not having to tear down the tent and everything is nice, but is Latvia starting to wear on you a little bit?

Not that much yet, to be honest. We go riding also during the week for some light training. Every second day we are on the bike. It’s not getting boring. We had some stuff to do. I think it’s the best thing we can do at the moment to get some races under the belt. If you have only single events, it’s not going to work out in the long run. Now again all this COVID stuff is getting up and countries are turning red. There are travel warnings. It’s not looking good for the rest of the year, let’s say. Let’s take what we can get and I think it’s a good thing with three races in a row here. Hopefully we can come to ten races or something like this. I would be happy with that at least.

We are doing the one-day format thing, which has been done in national championships all across the world. The riders are quite adamant that they love it and they want to see it in the future. I guess it would be the same for you? The riders say it because it’s 20 less motos, taking out a qualifying race, and that’s less risk. I guess that as a team manager less risk for your guys is a nice thing?

Of course. For sure it will open up a discussion after that, even if everything comes back to normal at a point. It’s a long weekend when we have that Saturday program. Some guys don’t like it, but from a majority of the riders I hear only positive feedback. For sure it will open up a discussion if this could be a format for the future or not. Same thing for I think EMX. When they are with us they have free practice at seven in the morning and the races at six in the evening, because it is just so packed. Maybe there should be a split between pro and European-level riders. One race is Saturday and the other race is Sunday. It’s fine with me.

That’s actually maybe a good thing because, with the normal schedule, if you haven’t got a rider in EMX250 then you are not going to have time to go and watch that. Whereas with this schedule, maybe you can go to check out the new talent and have more of an eye on the future.

That’s for sure. It would give you way more time to check out the youngsters and what they are doing. Even if you have a guy out there in EMX, you can follow up better. If you have three classes in one day, you better have a good running shoe or something like that because that’s all you do! You run back and forth to try to please everybody and keep everybody happy. It would open some new things. Like I said, we will open a discussion about it for sure.