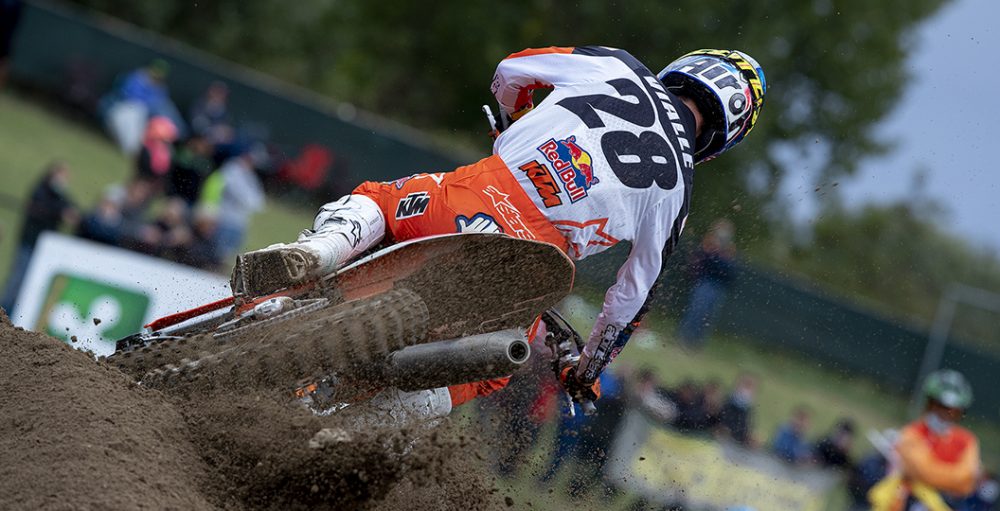 Dirk Gruebel, the team manager at Red Bull KTM Factory Racing, is watching Tom Vialle charge towards an MX2 title in just his second year, not that they are counting points just yet. The week at Mantova, in Italy, was brilliant for Vialle and Gruebel discusses that in this exclusive MX Vice interview, as well as the latest on Jeffrey Herlings. It is fair to say that Herlings will not return to racing until those pre-season races in 2021, which is the smart thing to do.

MX Vice: Another triple header done. Tom [Vialle] did not actually win any of these three events, but yet he is kind of coming out of here as the winner. He made a lot of points up, again proved that he is the fastest guy in the series and that he will be difficult to beat. All in all, I just think it was a positive one for Tom. He’s kind of again proven what he’s capable of.

Dirk Gruebel: Yeah. Like you said, in the end he comes out as the winner points-wise. Unfortunately for him, he did not win a single Grand Prix. Today [round eleven] it should have happened – he would have deserved it and was the same speed as Jago [Geerts]. He won the first race. Jago got a go at him in the second one. It was a bit of a risk. Tom tried to reel him back in and he was even there on the last lap, but that was a bit too late. A first and second for second overall is fine. Wednesday was a good day for us as well. Jago kept giving presents to us a bit with his crashing, so nothing we can do with that.

Sunday, a perfect first race. In the second one Tom saw that he had a problem with the wheel – he had mud build up and he was completely unbalanced, so he thought that it was broken. That is why he did not really jump everything. He closed his throttle and went back to fourteenth. That cost him a lot of points there, otherwise it would look even better now. Tom is on a good way. Another triple header done and still holding the red plate with a good margin of points now. It’s looking good.

When Jago got ahead of Tom in the second moto, they would have been on the same points overall. I was wondering if Tom would just let him go, thinking of points, but I guess it’s early for that? We have seven rounds to go, so it is early.

We are not counting points yet. It’s good that he has a little bit of a margin now, but you should not think about whatever yet. There are seven rounds to go. Anything can still happen, especially with these triple headers. It is different than a normal MXGP season that is week in and week out. Tom has a bit of margin to play with, so he can play it smart too. Today he was hungry enough to go for it. It did not work out in the end, but he tried.

The third one is still a bit weary with everybody, also the riders. Again it was the same track with no changes. Okay, it’s also here difficult to make a big change to the track like going in another direction or have different jumps. It’s not going to be a complete makeover. You add a jump or two, but it does not change the character of the track. It is the same story still. They get more accustomed to it quicker in the free and timed practices. They have data by now that was different at the very first one in Latvia, but by now everybody gets accustomed to it and it’s good.

I’m sure you heard rumours yesterday, like me, that we were going to be back here again next weekend. That would have been definitely a little bit too much Mantova, huh?

I was going to be happy with that. We can go to Italy, just take us somewhere else.

No. It was a weak rumour, let’s say. Some people were saying it’s not going to happen with Spain and we go to Ottobiano instead. Let’s see. Somebody will tell us.

Yeah, especially if they come up with one list after another and this guy needs a special paper and the other guy is nothing. You need this and you need that. You do not need that, because you live there. It’s a bit of mess. It’s a lot of paperwork and planning in advance. Hopefully all these flights will happen down there. This is a bit my concern still. We will see. Now we head to Spain and hopefully everything goes well there, we are not trapped and can come back to Belgium afterwards. Otherwise we have a problem [laughs].

If I remember right, Jeffrey was supposed to have a second MRI last week or this week. Either way, I guess everything is progressing quite nicely? It seems as though he’s kind of living life as normal now?

Yeah. He had a second scan on Tuesday, but I think he gets the result only on Monday. Feeling-wise he’s pretty good. He is already with the physio doing some therapy and so on. He said pain-wise he’s really good now, but the bone needs to heal still. We will work on that.

The season ends in a month. There is no reason for him to rush back, as we have said before. Nothing to gain from coming to Lommel, Trentino or wherever we race. What’s the point?

No. I don’t think that will happen anyhow. Now he’s off the bike since Faenza. It will take him a couple more weeks until he will get the green light from a bone-structure side, so then what? Like you say, why would you want to race three races in Trentino? What for? Then I don’t know, your winter is maybe done again or whatever.