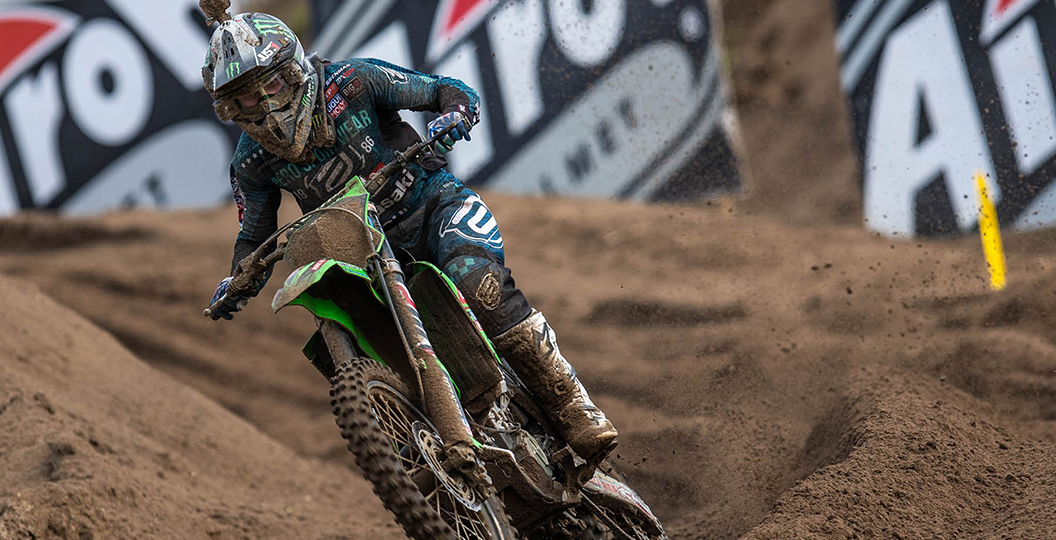 It really seemed as though the Grand Prix of Belgium would be the toughest race of the year for Darian Sanayei, who is still trying to overcome the aftereffects of the Epstein-Barr virus. Sanayei pulled a great result out of the bag though, considering the circumstances, and left the sandy venue feeling encouraged. There is not long left for him to achieve his outstanding goals in the MX2 division, so it will be interesting to see just how far he can push things.

MX Vice: I’ll be honest. Coming in, I didn’t really expect much. I kind of thought it was going to be a disaster, because of the Epstein-Barr aftereffects. No race fitness, no bike fitness and no time in the sand. Everything was kind of adding up for it to go terribly, but you pulled it out of the bag in the first moto with a tenth. That was one of your best results of the season. In the second moto I think you got a point, but who cares? The first moto was great.

Darian Sanayei: Yeah. We were also considering probably not even doing it. We were talking it over. On Wednesday I didn’t know if I was going to race or not, just because we were thinking how I have been feeling and how it has been going. The toughest race of the year and stuff, “Is it even worth it?” You screw your body up over the weekend, so realistically it is two or three weeks that I could keep trying to build a little bit and build something. We decided as a team and stuff… They kind of said I have to be out there.

I went out and actually the weekend wasn’t terrible. Yesterday I was around eleventh or twelfth in the qualifying race, then had a little bit of an issue. My bike was just kind of bogging and stuff and just got worse and worse. I was just kind of scared going over all the jumps and stuff, so I pulled out. I had an outside gate pick today. My starts have been really good actually lately, so that’s one positive. I got a pretty good start in the first one. I kind of fell back a little bit because I was like, “Dang, this is going to be a long race.”

I fell back a little bit, just charged back up and ended up getting tenth. At Lommel, for the situation and everything we cannot complain. Second race, not as good of a start. I was around twelfth or thirteenth and then I ended up crashing on the second lap. Then in the spot that I crashed… Everybody was flying through there. I just waited for everybody to go. Then I started in last and caught back up to seventeenth. I got four points in the second race. Definitely not good results, but for where we are at it is okay.

I didn’t actually get to see where you were on the gate but, like you said, I was pretty amazed at how good your starts were considering I’m guessing you had a shitty gate pick. Did you get kind of near the middle or near the middle enough where you could pull something out of the bag?

No, because we had the DNF yesterday. I only beat the other people who did not finish before me. I think I was like twenty-seventh on the gate, which isn’t terrible. It’s pretty unrealistic to get a holeshot. If I would have been more inside with the start I had, like in that first moto, I definitely would have been top three. I came around the first corner in fourth and then came out in like ninth. Starts are pretty good.

This bogging thing… I feel like it’s happened before. I cannot remember where, but I definitely remember seeing you in a pit lane revving your bike and it not sounding healthy.

Yeah, I feel like it was on my first bike. It’s kind of a mystery bog. It’s super hard for the team, mechanics and everything. Seriously, Jordan [Vaughan] has gone through every single thing on the bike to fix it and stuff. It doesn’t do it on the stand. It doesn’t do it for a couple laps, then all of a sudden it just starts happening. Last weekend that’s what the issue was. Today we just rode on the second bike and had no issues. The bike ran good.

You didn’t expect much. Do you feel like that maybe actually helped in the long run? I’m guessing Loket you were like, “Right, I’m back. I missed Indonesia. It’s hard pack. I’m good here. I can do all of it.” Whereas here I’m guessing you were like, “F**k it. Let’s see what happens.”

Yeah, definitely. I definitely had expectations to do pretty good in Czech Republic and it just didn’t really go my way. I also still didn’t feel very good. Then this weekend I kind of came in just like, “Whatever, we’ll see what we can do.” Today and yesterday were pretty much the first race weekends where I didn’t feel terrible just walking around and getting on my bike and stuff. Hopefully that’s improvement. I just need to build my fitness back. I have, like, no fitness. It’s hard to do, obviously. When you are racing it’s not long for the season left, but I just got to keep trying and keep working.

Is this something then? Is this the start of a good little run where maybe something good is going to happen? We obviously thought Russia was going to be that, so I don’t know how confident you can be.

Yeah. Not going to say this is something, but it’s taken a while coming back from the knee and everything. Starting at the knee I took so long off, then I came back with the Epstein-Barr. I just couldn’t even really get my head back into moto only. This is my life. This is what I’m doing. It’s just taken a while. I think finally now I’m on the right track.

Have you got something in mind that would make you happy by the end of the season? A top-five finish maybe? I feel like that’s probably achievable.

Yeah. Just try to do my best. I don’t really have any expectations, but at the same time I want to get a podium before I’m done with my MX2 career. There are not many races left, but all the last three are pretty good. We’ll just shoot for the best we can.

I feel like we need to say it once more: People do forget that had you not had this whole sh*t show go on, you would have been a title contender and race-win contender all year. People forget that RedSand speed and stuff like that. This should have been so much different. I feel like people see you riding around in fourteenth like, “Oh, yeah. It’s just Darian.”

Yeah, definitely. I feel like I, my team and everybody thought that I was going to be a title contender this year. After such a long time of not doing well, getting bad results and everything it gets to you and stuff. I’ve just got to keep remembering this is where I’m at right now, but it’s not where I’m going to be. I know that I have speed. I still can show speed on the weekends and everything without training or riding. I think it still shows that I have potential. I just need to work from potential to now actually make it happen.

It’s still kind of a coin toss and stuff. We are just kind of figuring out what’s the best. Obviously, the rule is not changing in MX2 so if I’m in the Europe side I’ll be in MXGP with DRT Kawasaki. Then if I’m back in America, I’m not too sure. I think, for me, if I were to have the results that we were expecting this year it wouldn’t have been tough for me to get something in America. It’s just like now to say, “Hey, I’m getting tenth, fifteenth and twentieth place but I’m going to be the guy.” It’s hard to say that. I actually do believe that, but for them to believe it and then the sponsor to believe it also is the only thing.

I guess all the factory seats are gone in America, but would getting on a team like Rock River be enough for you to go home? I feel like that’s solid enough. [Jacob] Hayes did decent with it this year and kind of gave his career a bit of a leg up.

Yeah. They are pretty solid. I’ve never really been in touch with them much. I think there are actually two possibilities that I’m looking at right now. I don’t know what the chances are of them, both being on factory spots. If I can somehow work something out there, that would be good. If not, then we’ll just do what we can.