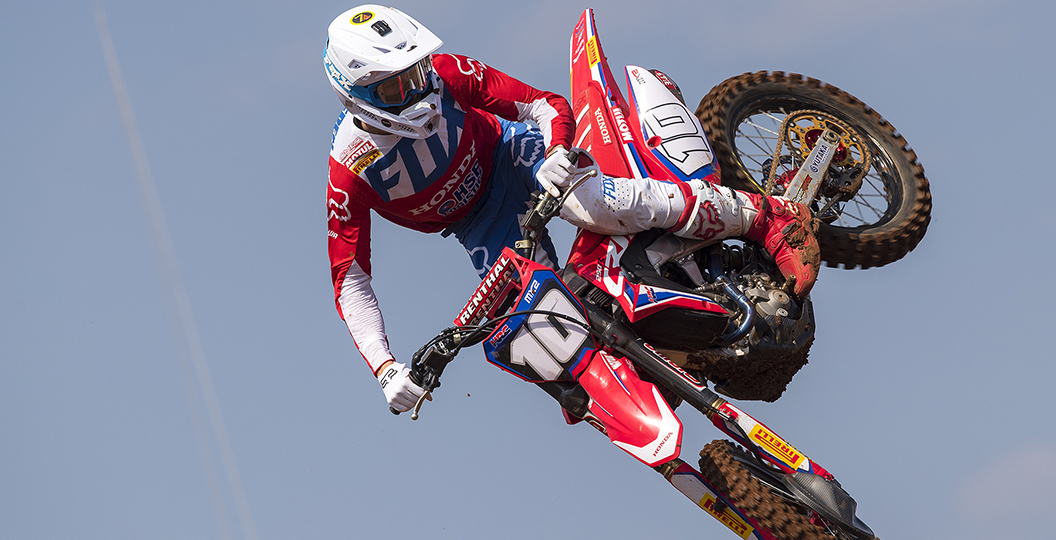 Calvin Vlaanderen finally stood on the podium for the first time this term at the twelve round, the Grand Prix of Asia, over the weekend. It was a big weekend for him and one that reminded most in the paddock what he is truly capable of. Vlaanderen wants more though, especially as the clock is counting down on his MX2 career, as he explains in this exclusive MX Vice interview. 2020 is also discussed at length.

MX Vice: Up on the box for the first time this year. It feels insane to say that, because you should be there every week, but there have been injuries and you were a fourth-place guy at the beginning of the year. It must just be good to get this monkey off your back?

Calvin Vlaanderen: Yeah, sure. Really good to be back on the box. It sounds funny that it’s the first time this year, because I feel like I have been there before this year. I had a good beginning of the season, going three times fourth in a row. Now with the injury and everything it was quite tough… I didn’t really expect to be back on the box so quickly. I’m not one hundred percent yet physically. Also with my riding I’m missing a bit of speed.

This weekend the plan was just to put two good motos together on Sunday. Last weekend I did one on Sunday but then the second moto I was just completely done, should I say. No energy and just tired. Good to get two motos in and get back on the box. It feels really good.

Obviously, coming back from injury you would think this would be one of the toughest races with the heat and stuff. Is there any explanation for you being so strong here so soon after an injury? I cannot really come up with one. Yeah, you are fresh, but that does not help when you are coming off of a long time off the bike.

I didn’t really take time off. With the injury with the foot, you have to take a few weeks off. Especially with the infection, I could not sweat at all and I did not want to get an infection again. I did take a few weeks off and it was frustrating. I was still doing everything with my upper body in the gym and that. I have been training harder than ever before, I feel. I feel like I am stronger than I have been ever before, which is probably why I am back on the box so soon.

I was just really tired last weekend and the intensity in the motos, you do not get that with training. I think to get that out of the way… I felt a lot better already this weekend. Free practice on Saturday I was like, “My body feels good. I can do well this weekend.” Today also in the motos I felt like I could push, whereas last weekend I couldn’t really push. I was just riding around. I have been training hard. It’s paid off now.

Do you think it helped being in a situation where you couldn’t train this week? Coming back last weekend, that was a shock to the system. You have not done a full MXGP weekend in months. Had we been in Europe you would have done that, tired yourself out, and then gone straight back into training and maybe burnt yourself into a hole. Here you did that, got that learning experience out of the way, and then reset to zero again.

Having the week off was good for me, actually. We went to Bali and I could recover quite well during that few days. Even if we were in Europe, I monitor my body quite well. If I have a tough weekend and I’m tired like I was last weekend… On Monday I was just sleeping the whole day.

I listen to my body and if my body needs rest, then I’ll rest, which is what I do. For me, having that week off last week was good. I’m a rider who does not need so much time on the bike. I prefer technique training. I just need a good feeling, a good flow and I’ll ride good.

You have been on the box both times we have come here. Track you like? I feel like everyone gets on with it. Everyone complains about Indonesia. If we are going to come to Indonesia, I feel like we are not going to find a track much better than this.

It’s tough with the heat and the sun. Blue skies the whole day. Obviously the track being so hot and red clay, it’s going to get hard and slippery. It makes it technical in one way. For us riders, it’s a bit dangerous and a bit sketchy. They did not do great track prep this weekend, but it is what it is. It’s the same for all riders. If you feel like it’s dangerous, you just calm down a little bit. That was what I did this weekend.

I thought the track was dangerous in some spots, especially when they put water on, but then you ride slow in those places where you need to. A lot of people complain, but Rui [Goncalves] and the guys are actually doing a really good job. They are trying their best. They could not really do much more this weekend, I feel like, with the heat and with the track. It’s going to get hard and slick. We all knew that. I trained before we came here on hard and slick tracks to prepare for this. It’s the same. It is motocross, I think.

On that note, downhill triple. I don’t think I saw you do it at all. Did you think about it? How did you measure that risk versus reward?

That downhill triple… I busted it out last year one time in practice, because I saw a few guys doing it. This year free practice I didn’t do it. I was like, “Maybe I’ll try in timed practice.” I didn’t do it. Then I was like, “I can’t try it out in the race, unless someone does it in front of me and I get a good start and they are pulling away or something.” I was happy just doubling and singling into the corner. It was maybe a little bit slower, but I just felt safer doing that.

Before this injury, in practice in Trentino you were on it. Everything was looking good. It’s your last year in MX2 so you have obviously got goals you want to tick off. Has this injury been tough to take? Do you now feel like you are in a rush to tick certain things off before you have to leave this class? How are you feeling in that respect?

During that injury period, I did think about it more and more. In the beginning I was like, “No, I’ll be back.” It will be fine, but now the time is ticking. Before this weekend, I had not had a podium this year and that’s quite surprising. Contract talk is coming up. They are not waiting for me to be a hundred percent. It needs to be now.

It is what it is. I’m just trying my best. I know if I get good results, if I ride like Calvin knows how to ride I will get good results and with good results I’ll have a good ride for next year. I am stressed a little bit about it, but also in one way I am just trying to focus on my training, having good starts on the weekend and putting in good rides.

Obviously you cannot tell us what you are doing next year or any of that, but are you done? Are you still shopping around or are you actually locked in with someone, whoever for next year?

I’m not done. Nothing is confirmed at all.

Is it looking good at least?

Last year here was when we did the big interview about South Africa, the flag and everything. I had flashbacks earlier and you were on the podium today. There was a flag out there. Have you heard anything from them recently? Are they kind of coming up to you with a box of chocolates and a sorry letter?

I saw on social media last year an apology about it.

When did this happen?

Like a month after this all happened there was one… I think Motorsports Africa put something on social media saying, “We apologise for the bad things.” I did not really go into it after that. I have not spoken to them at all since. It’s kind of a repeat from last year here. I qualified sixth last year as well. I think I went 5-4 or 5-3 in the motos last year and today it was 5-3. It was kind of similar, so that is good. I looked up, saw the Dutch flag and I was actually proud to be with the Dutch flag.

Netherlands all the way?

Netherlands all the way. Assen is going to be good. I’m looking forward to the Nations at the end of the year.