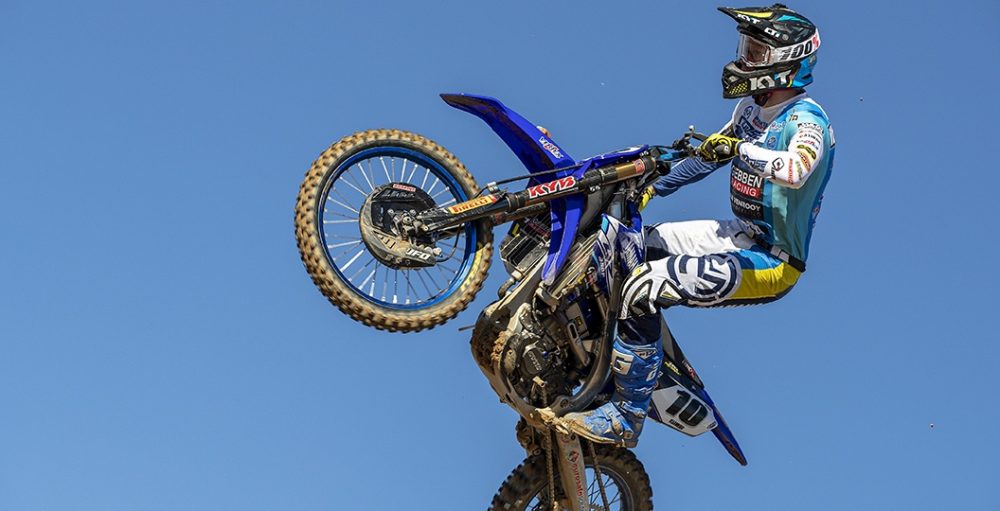 Calvin Vlaanderen is rapidly closing in on the top ten in the premier-class championship standings, which would be a decent reward for the progress that he has made with Gebben Van Venrooy Yamaha this term. Vlaanderen has faced some adversity along the way, with crashes and even a torn ACL, but he has proven that he has what it takes to mix inside of the top five at the highest level. Vlaanderen discusses all of the above in the exclusive MX Vice interview from the Grand Prix of Spain.

MX Vice: 14-14 on the day, I think. You were never really in a position to succeed. We had a track that was not great to pass on, for the seventh race in a row, so yeah. You are obviously not stoked, but I almost feel like I’m waiting for you to get that shot near the front. You had it at Mantova and proved a top five is easy for you. We just need that consistently, I guess.

Calvin Vlaanderen: Yeah, exactly. Going 14-14 was not the plan for today. I struggled a lot with arm pump. I struggled with arm pump, in qualifying too. I felt like I was riding a little bit better in the second moto, but I went down and a few guys caught me. I was lonely in fourteenth there. It’s obviously not what I came here for, but I just need more time on hard pack. I’m spending too much time in the sand and I need more time on hard pack, especially with the 450F. I think I haven’t even done a proper test with suspension for the hard pack.

This is one thing that I’ll need to work on in the winter, so coming into next year I know what I need to work on. We had some good results at Mantova, like you said. One top five, which felt quite easy, just to get a good start and to run up front. It’s nice. The racing is so one-lined, and the riders are so on the same level. It just helps so much when you get a good start. You kind of follow the guys in front. It was nice to get a top five and a top-ten finish. We want to get more of those, obviously. I think I’ll have some redemption to do in Lommel this coming week.

You mentioned not having much hard-pack time. The more I now think about that, it makes sense. We had lockdown, then we came out of it and you could still only ride near your house. That is all sand. We went racing and have been flat out ever since. It makes complete sense that you haven’t actually had much time on hard pack.

One hundred percent. Probably no one knows about this, but I went to France the week before Faenza and had a really big crash. I tore my ACL.

What? I’m guessing your ACL is still torn, then.

My ACL is completely gone. I do not have an ACL in my right knee. Every time I’m taping it. Faenza was really a struggle. I didn’t know if I was going to ride or get surgery done. Thankfully it’s still stable and the doctors are happy with it, so I do not need to have surgery. It was just literally like I nursed it for the whole of Faenza. That’s also put me, like I haven’t been on the bike during the week. It’s kind of just about resting and recovering. I had another crash at Mantova and hurt my hip…

Yeah, and my eye! It’s been tough now. It’s a busy end of the season. We have got to be fit for the races, and you can’t really get much bike time in the week. That has also been tough. I haven’t spent much time on the hard pack or in the sand, like you said. One thing that is for sure is that we are healthy now. Not 100%, but I feel good and I’ll be ready for Lommel.

Maybe you don’t even know this yet, but is your ACL something that you can go the rest of your career without? There are some riders who have just gone their entire lives without getting the ACL fixed. Do you know what the situation is?

Yeah. The doctor said that I could probably go my whole life without it, unless I feel like it’s not stable or whatever. We have to get it checked again. It’s stable and feeling pretty good at the moment. I just tape it up every time that I ride and don’t even think about it anymore. That’s one good thing. Putting my leg out in those deep ruts at Faenza was a challenge mentally.

Before we get onto today a bit more, your season as a whole. We have not spoken since Latvia. The positives have kept on coming since then and it’s quite clear that once the whole package comes together then you will be an easy 450F contender for top five finishes. The pieces are there.

Yeah, the pieces are there. I just need to put them together. I feel like I have potential. I have shown it. I just have not really put it together. One top-five moto in Mantova was nice, but I feel like I can do more and I want more as well. One thing for me is that mentally it has been really tough, knowing the big names when I see them in front of me. I feel faster sometimes, but it is tough to pass them. Whereas when a rider who I was battling with in MX2 passes me I’m like, “I’m going to pass him back directly and that’s no problem.” It’s just that mentally it’s tough. I passed Arminas [Jasikonis] in the Dutch series and then now I know, “Okay, I can pass Arminas.” It is just like I need to pass [Gautier] Paulin one time and then I know I can pass him.

Was it the same with [Gautier] Paulin today? You two were kind of going at it for a bit in the second moto.

Yeah, exactly. I think it’s just experience in the class – staying healthy and staying fit is the goal for this year. We showed up at every single round, and maybe we can get even a top-ten finish in the world championship at the end of the year.

You have got to look at the start of the season as well, which no one will remember as it was like twenty years ago. It was rough even before you got to the first race, with injuries and a late start. The first two rounds were eventful, but you came back and are now in a solid place. You have come so far already.

No, one hundred percent. If I look back at Valkenswaard and Matterley, those were just really terrible results. My riding was also really bad. I didn’t feel comfortable at all. Not today, but if I look at Mantova and Kegums then I think I’ve definitely improved a lot. There’s definitely potential. Hopefully next year I can be up there consistently inside the top ten. That’s my goal. At the end of the day, my goal is to be battling for the world title in two years. Every year I just want to get better and better. That’s my goal.

You mentioned the mentality thing. Did the fifth place at Mantova do a lot for you or not? You did not pass everyone to get there. Do you actually need to pass them to have that change? Does just beating them do the job?

It definitely helps. Obviously getting a good start and battling with them – I did not really battle with them in that moto, but one thing is when you pass them it does change something mentally for me. It didn’t really change much, but it definitely helps.

Finally, an all-new track today. Everyone is pretty positive about it. We had elevation and it was a bit technical in spots. The dirt got quite chewed up. It was decent as far as man-made tracks go, right?

One hundred percent. I think this was a good track. Obviously, a little bit one-lined. I feel like they can maybe mix it up a little bit with two lines or an outside berm in some places, just to create some passing opportunities. I think there was about two places on the track where you could pass. Honestly, it was a good track to race on. I look forward to coming back here in the future.