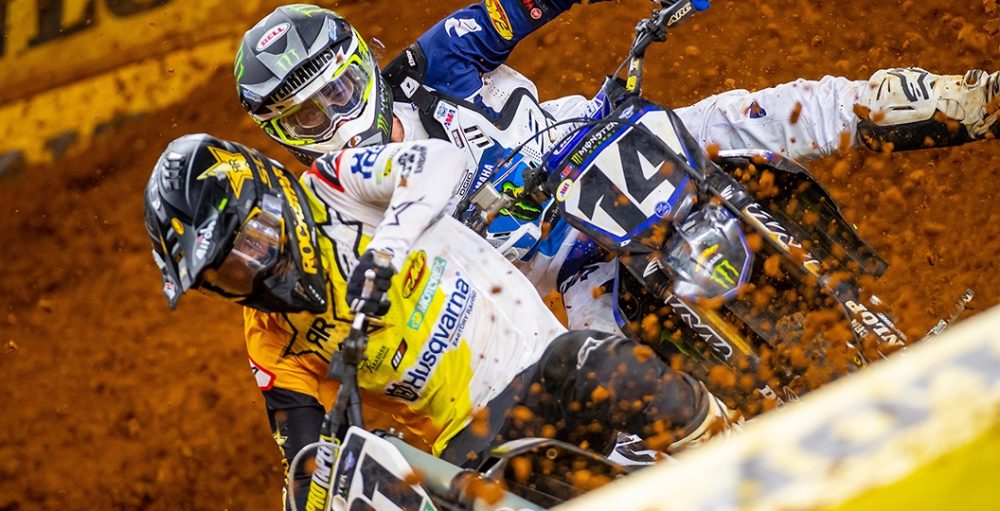 Although the track at the tenth round of 2021 Monster Energy Supercross, Arlington 1, was fairly creative, it did not exactly lend itself to passing and that prompted riders to get aggressive in an attempt to move forward. Jason Anderson was the most successful at executing moves like that – it was reported by the television crew that the AMA were looking at his pass on Dylan Ferrandis and whether or not a penalty was warranted.

No penalties were handed out in the end, which meant that he held onto his first trophy of the term. Anderson actually thought that the pass on Ferrandis was not that big of a deal – the fact that it came as such a surprise to Ferrandis was why he thought he hit the dirt. “I landed on the inside and came in pretty tight on the corner, on the inside of him, and he ended up on the ground,” Anderson said in the press conference. “I honestly think that I more spooked him than anything, you know? It is what it is. I don’t want someone to end up on the ground, but at the same time I want to pass the guy. I don’t want to be chilling behind people like I have been all year.”

Ferrandis got tangled up in his YZ450F as he hit the ground, which meant that it was a fairly vicious hit and one that forced him to withdraw from the 450SX main event prematurely. It was a painful leg that caused him to exit the racetrack, but it sounds at though that is not anything that will hinder him on Tuesday. “The day started off well; I had a good start in both my heat and main event,” Ferrandis said in a Yamaha statement. “Unfortunately, I got kicked out by another rider and that made me crash. I hit my leg pretty hard and it was too painful to finish the race.”

It’s no secret that Ferrandis is struggling to establish some momentum currently, but Anderson is actually the opposite. The Rockstar Energy Husqvarna Factory Racing has gathered pace over the last couple of rounds and it sounds as though that is no coincidence. “Ever since the first Orlando I started riding a lot better,” he said following the race. “I had a few little issues with my body, more so at the beginning of the season, that kind of got the best of me. When I raced I couldn’t push too much. That was like a little issue that I had, but to be honest even my riding and everything… My riding has gotten better. Everything has gotten better since Orlando.”

Jason Anderson has actually jumped to seventh in the premier-class standings now and is only 15 points down on a position inside of the top five. That is quite the turnaround, considering that he has already missed one of the rounds that has been run thus far.