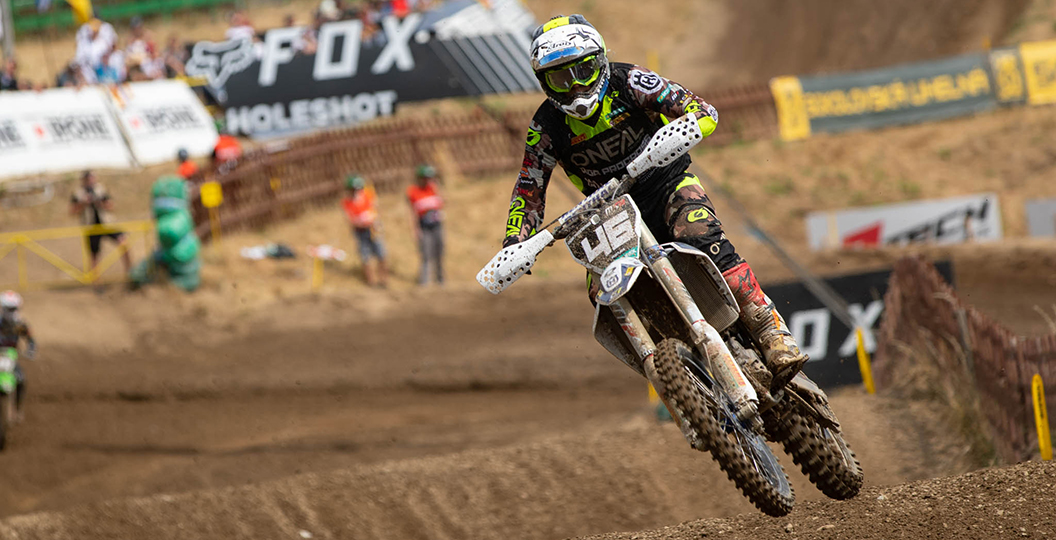 The Grand Prix of Belgium, run in the bottomless sand of Lommel, is undoubtedly the toughest race on the schedule, hence why it is hardly surprising that just one rider is going to return this weekend. Talk about jumping in at the deep end! It has actually been a bad week for injuries, aside from the fact that it was confirmed that Ben Watson would be returning, as four MX2 riders have limped onto the sidelines.

Ben Watson: Ben Watson has had a turbulent time of it since he injured his hand at the Grand Prix of Germany. First he tried to return in Indonesia, but then had to withdraw prematurely as the plate moved away from the bone due to the strain of riding. It was then determined this week that things were moving quicker than initially expected and, following a couple of practice days in the sand, he is in for this weekend!

Mitch Evans: Mitch Evans has scored just fourteen points in the last month and a half, which sums up how his term has gone quite nicely. Evans has still not recovered from the beating that his body took in Indonesia and will consequently miss the Grand Prix of Belgium. It seems as though he will definitely return at the next round.

Jed Beaton: Jed Beaton has had an up-and-down time of it this term. Unfortunately, the rollercoaster continued this week when he fractured his sternum without even falling. There is currently no timeline on his recovery, which will be the case until his next check up with the doctor.

Davy Pootjes: Davy Pootjes injured his ankle in a crash back in Latvia, then finally returned last weekend. Pootjes caught his ankle once again, however, and is now back on the sidelines. There is still no timeline on his recovery, as it is not like anything is broken or dislocated. It is just a waiting game at this point.

Zachary Pichon: Zachary Pichon had a massive crash in the qualifying race at the Grand Prix of Czechia and bruised his ribs, which has stopped him from training this week and ultimately forced him to withdraw from this weekend’s Grand Prix of Belgium. Pichon will return at the next round in two weeks.

Bas Vaessen: Bas Vaessen was involved in a horrific crash at the start of the second moto at the Grand Prix of Asia and lost feeling from the neck down for a couple of minutes. Vaessen regained that, thankfully, but was later diagnosed with a broken C6 in his neck. Michael Sandner has been drafted in as a fill-in rider on Hitachi KTM.

Michele Cervellin: Michele Cervellin fell at a round of the Italian Prestige series at the start of July and dislocated his wrist, which will sideline him for a considerable amount of time and obviously stop him from competing at the Grand Prix of Czechia this weekend. There is currently no timeline on his recovery.

Julien Lieber: Julien Lieber was en route to a career-best finish in the first moto at the Grand Prix of Germany, then had a spectacular crash and fractured his elbow. Lieber will now miss an unspecified amount of time as he recovers. Tommy Searle has been drafted in as a fill-in rider on Monster Energy KRT.

Antonio Cairoli: Antonio Cairoli dislocated his shoulder at the Grand Prix of Latvia and was planning to return at some point. There was even a chance that he would race in Indonesia! Further examinations deemed that surgery was needed though and he will now miss the rest of the current term.

Jeffrey Herlings: Jeffrey Herlings injured his ankle seconds before moto one at the Grand Prix of Latvia, then went on to win that race anyway. A hairline fracture at the base of his tibia bone was the official diagnosis. Herlings underwent surgery days after sustaining that injury and is expected to return at Imola.

Clement Desalle: Clement Desalle underwent surgery on the Monday after the Grand Prix of Russia, in order to repair the broken fibula that he sustained. A sprained ankle was also picked up in that vicious crash. Desalle is expected to miss the remainder of the current term.

Alexander Brown: Alexander Brown, the fill-in rider over on Hitachi KTM, crashed at the Grand Prix of France and aggravated an existing shoulder injury. Surgery was performed on the shoulder and there is now no timeline on his recovery. One would presume that he will race again before the end of the season though.

Conrad Mewse: Conrad Mewse crashed at round two of his domestic series and sustained a wrist injury that has sidelined him for a while now. Updates on Mewse have been sparse and it is now uncertain whether he will even return before the end of the season. Things are taking longer than most expected.

Jose Butron: Jose Butron shattered his ankle in testing in April and will skip the rest of the Grand Prix campaign. The injury is rather severe, hence why he needed to have a surgery that lasted for more than six hours, but he is adamant that he will be back next year.