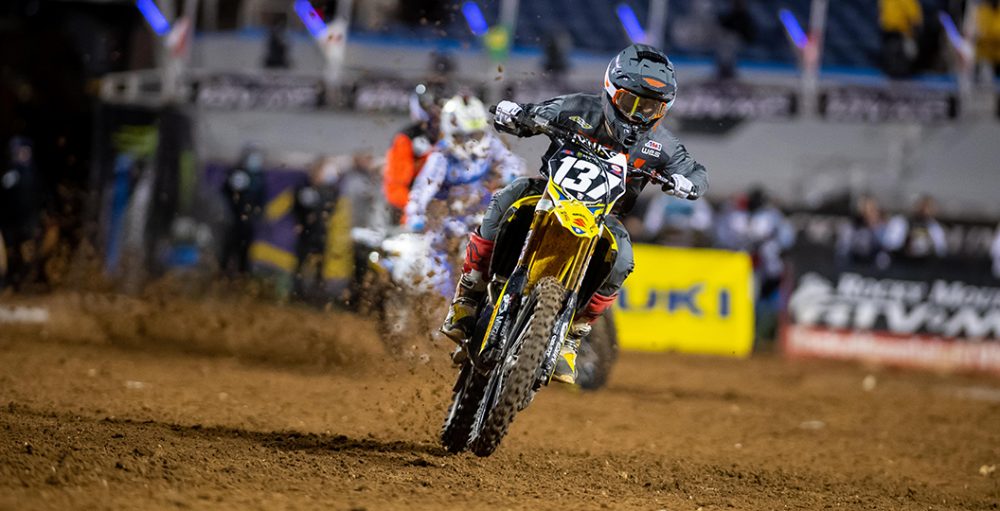 Sean Cantrell’s return to Monster Energy Supercross slipped beneath the radar somewhat. Before he went cartwheeling through the whoops at Orlando 2, that is. Cantrell actually performed well in the second 250SX heat race and moved into a transfer position, before getting bucked in the whoop section that caught out countless riders (Carson Brown and Jordon Smith immediately spring to mind). A broken collarbone was the result but it seems as though Cantrell is still set on making his time with BarX Motorsports Suzuki a success.

“There’s a lot I can say but I’ll try to keep it short: Last night was heartbreaking for me. I was sitting in a classroom back in November/December. In two months I put everything I had into my program. No fitness trainer and no track coach, just the desire to prove something to myself and a bunch of rad guys to work with. Took me a while to get comfortable being inside a stadium again but as soon as I got behind the gate I felt at home. I was very happy with my riding in the heat race.

“Worked my way into a qualifying position but the whoops were tough all day and had an unlucky run through them. Ended up breaking my collarbone. I’m done feeling sorry for myself. I will get this thing fixed and be back in a few weeks. A lot of weight is lifted off my shoulders knowing that I’m still capable of competing at this level after being away for so long. Thank you for all the get well wishes. Definitely means a lot to me. Just another chapter in this story. I’ll be back again.”

Cantrell had previously ridden for Troy Lee Designs Red Bull KTM, but was dropped by the team prior to 2020. A niggling wrist injury left him with no immediate plans and, although he picked up a stock YZ250F to practice on, he ultimately missed a year of competition. Larry Brooks brought him back into the pits with the new (to pro racing) BarX Suzuki effort.