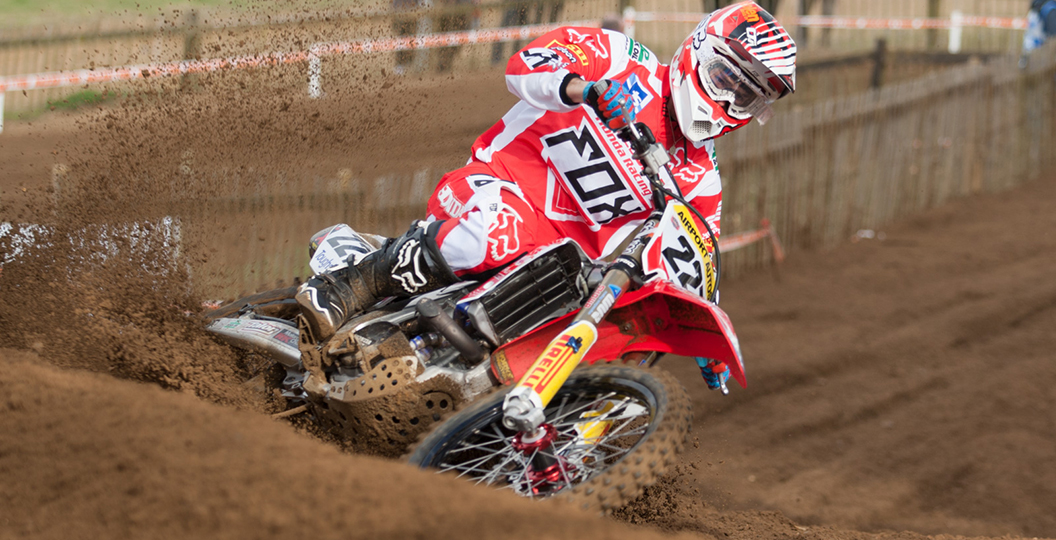 Buildbase Honda rider Kristian Whatley is currently on track to be back in action for the fourth round of the 2015 Maxxis ACU British Motocross Championship at Hawkstone Park on Sunday 7th June having undergone an operation to repair his left collarbone.

The twenty-five year old former national champion sustained a fracture to his left collarbone as a result of a crash, which happened during the latter part of a planned suspension test last Monday 25th May. Running slightly wide, the Buildbase Honda front-runner clipped his footrest on a trackside banking at the Culham circuit. This caused him to be thrown high into the air with the resulting impact causing immediate injury.

Under the supervision of High Performance Manager – Darren Roberts of Harris and Ross, specialist shoulder surgeon Mike Walton operated on Kristian during Thursday morning at the HCA Hospital near Manchester. The relatively straightforward procedure, which included the insertion of a metal plate to repair the fracture, was deemed a complete success. The early indications are that subject to any unforeseen complications Whatley will be able to race at Hawkstone Park as originally planned.

Kristian will return to light training early next week and will then return to riding proper closer to the weekend, when a final assessment will be made by the medical team to confirm his participation at the famous Shropshire circuit.

Buildbase Honda MX Team Manager David Thorpe commented on the situation. “I am gutted for both Kristian and his mechanic Ryan as they have really been working hard over the last few weeks to be in good shape for Hawkstone. Everything was going really well and they had made some great progress and then this happens. Right now it feels like we have taken three steps forward and two back, but that’s racing for you. Darren and his team have done everything possible to have Kristian ready for Hawkstone, so fingers crossed.”

Whatley added. “These things never come at a good moment, but it’s happened and I need to deal with it. The operation went well and I am now giving it 110% to be back for Hawkstone. I can’t say anymore than that at the moment, so lets see how it goes.”