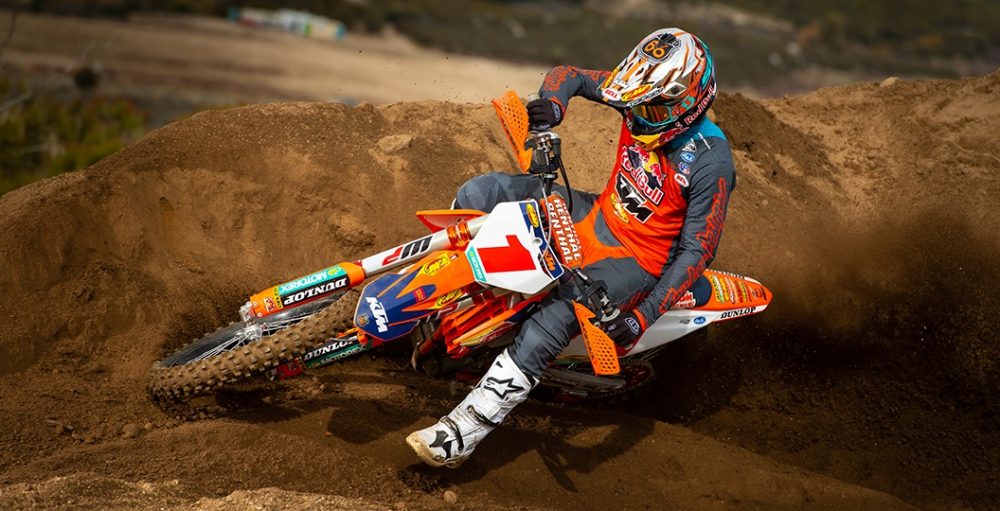 Bad news for Red Bull KTM Factory Racing’s latest recruit for 2021 Lucas Oil Pro Motocross, Kailub Russell, who suffered multiple injuries in a practice earlier this week. Russell is now dealing with a broken jaw and multiple broken ribs, which is obviously going to have a significant impact on his preparation for the opening race at the end of May. Russell announced the news via the following social-media statement.

“Don’t know where to start. Had a week booked to be out here in California riding and testing to get ready for this summer. Spent yesterday morning riding Pala, we had just found a good setting I was comfortable with and working into trying to pick up the pace. I lost the front-end just before this big roller and my clutch hand came off the bike and I whiskey throttled clear into the fence.

“I was unconscious until the ambulance arrived, was diagnosed with three broken ribs and a broken jaw (which is wired shut now). Thank you to everyone that has reached out and lended a hand yesterday! Also @[email protected] and @AnttiKallonen for going above and beyond for me the past 24hr. I’m not sure where this leaves me to be ready to race this summer. Definitely going to be tough to make it to the first couple of rounds. But dammit, this will only make it that much sweeter.“

Kailub Russell is slated to race alongside Max Vohland in the 250MX class. Vohland is actually back on track now, but will not be returning for any of the remaining 2021 Monster Energy Supercross rounds. Vohland’s focus is solely on the outdoors now. The opening round of 2021 Lucas Oil Pro Motocross at Fox Raceway is 45 days away at the time of writing.