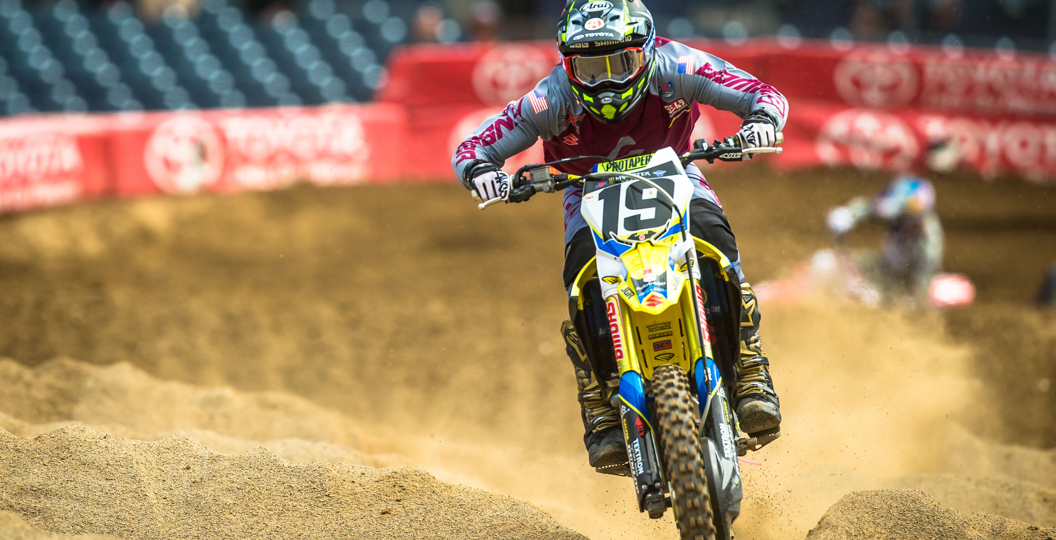 After sustaining a concussion in the off-season, Justin Bogle returned to racing at the fourth round of Monster Energy Supercross and immediately put his Autotrader Yoshimura Suzuki into the main event. Bogle, a former champion, is now back on the sidelines though, after getting landed on in San Diego on Saturday night.

“Bogle was making progress throughout the day in San Diego. Unfortunately, he was landed on by another rider and sustained a break to his right humerus,” Jeremy Albrecht explained. “He was transported to a local hospital for observation. On Monday, Justin underwent what his surgeons, Dr. Tal David and Dr. Christopher Sherman are calling a successful surgery, which included fixing the injury with two plates and screws. We will have a better idea once Justin heals up from surgery and resumes daily activities.”

Seeing as Justin Bogle will be out indefinitely, it has been announced that Malcolm Stewart is going to continue to race for the Autotrader Yoshimura Suzuki team. Stewart joined the team at round two of Monster Energy Supercross, Houston, and now sits fifteenth in the premier-class standings. There is also the possibility that Justin Hill will step up to the class at one of the upcoming east events.