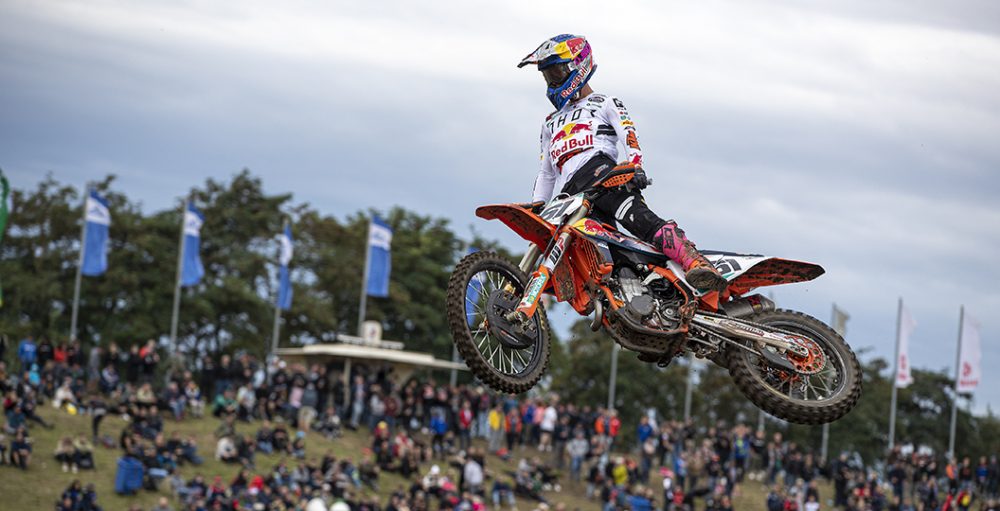 This weekend’s Grand Prix of France has just gotten a little more interesting, if that is even possible. Jorge Prado will line up at Lacapelle-Marival and attempt to salvage some points, just one week on from a controversial crash at the conclusion of moto one at the Grand Prix of Germany. The way that unfolded has been discussed at length this week. Red Bull KTM Factory Racing released the following quote from Prado, which explains his decision.

“Every day is a bit better. The cut was pretty deep and I was lucky I didn’t get any damage to the nerves or the muscles. I had some stitches under my arm and now the plan is to see if I can ride the bike and race this weekend. It’s a bit hard to pull my elbow up, but I’ll try to do my best. Some points will be good enough.”

Prado actually had surgery to repair that deep cut on Sunday evening, but there was no nerve damage. Rumours were swirling on Sunday, as word that the cut was so deep that he had sustained nerve damage to his hand ran rampant through the paddock, but that has proven to be false, thankfully. Prado’s status for France was up in the air until this morning, but it was already announced that he would compete the Grand Prix of Spain next week. It was not like he was expecting to miss a chunk of time. Prado released the statement below on Tuesday morning.

“Thank you for the messages of encouragement and for being so concerned about my health. As you know, after winning the first moto at the German GP, Jeffrey and I collided after the finish line, digging the handlebars into my armpit and having to undergo surgery that same night. Fortunately everything went well, but I don’t know the real extent of the injury.”

Prado has a realistic shot at the championship, as he is just 31 points behind Tim Gajser with seven rounds to go, but he is obviously going to need some help, especially if he loses more points at the Grand Prix of France. Prado is fourth in the championship and likely has bonuses in place for a top-three position in the points.