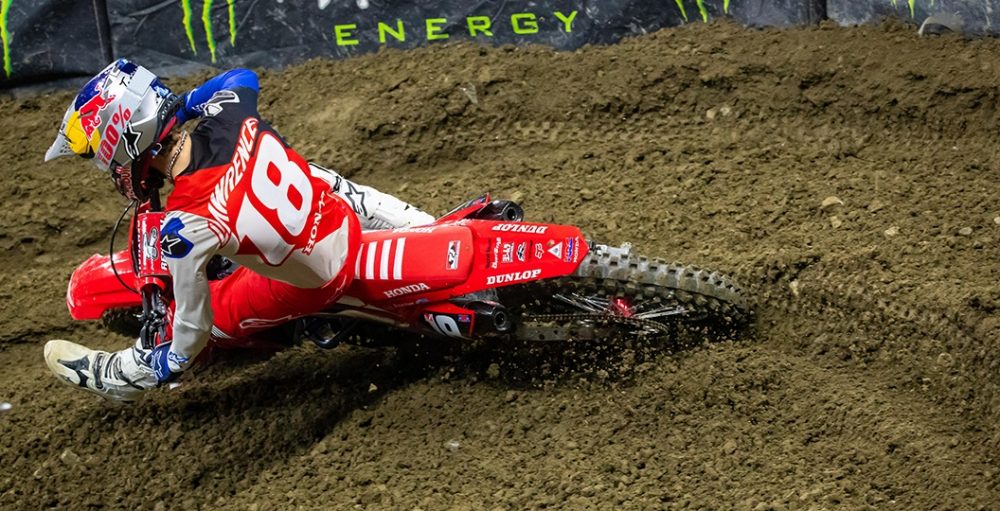 After withdrawing from round five of 2021 Monster Energy Supercross, Jett Lawrence has released the following update on his shoulder injury. The fact that he is even trying to race on Saturday is obviously good news.

“Hey guys, obviously last didn’t go so well. I tried to ride main but I had to make a call that killed me on the inside but I just wasn’t 100% and I just couldn’t risk further injury. It’s going to be a long journey and there is no need to make any low % plays when it comes to my body and health. We are doing everything possible to make sure I am good to go for Saturday. I’ll keep you guys updated.”

Jett Lawrence was ready to race at Indianapolis 2, but crashed again in the first 250SX heat race and injured his right shoulder. Lawrence tried to race in the last chance qualifier, and won it despite doubling through the whoops each lap, but eventually withdrew from the main event. The crash that ultimately ended his night can be viewed below.

There is no official word on the extent of his shoulder injury.

Good news! Jett Lawrence is okay after that wild crash in the final timed session at round five of 2021 Monster Energy Supercross. Honda HRC shared the following statement, confirming his status for this evening. Footage of the incident can also be found below.

“Took it like a champ. @Jettson18 had a crash in the whoops during qualifying, but is going to be alright! He posted the second-fastest lap time in the final 250SX qualifying session and is ready for the night show.”