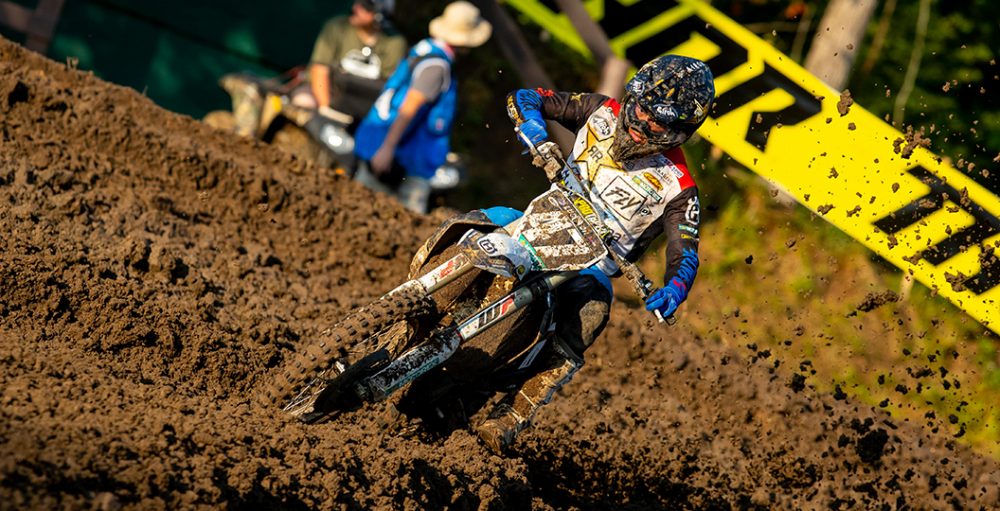 Rockstar Energy Husqvarna Factory Racing have had a truly horrid time of it in 2021 Lucas Oil Pro Motocross. Injuries have decimated their 450MX effort and now the same’s happening to their 250MX wing. Stilez Robertson has been missing from the last two rounds with an illness and now Jalek Swoll, who claimed an overall victory for the first time at round three of the series, is out with a dislocated shoulder. Swoll sustained a shoulder injury in practice at round ten, Ironman in Indiana, and then it popped out on the sighting lap before moto one.

“I was feeling really good and on the last lap. I had the bike sideways over one of the big triples and on the way down there was this weird freak incident – my feet came off the pegs and I just slid through the whole bike. I was trying to grab with my legs but it did not happen. I came down on the landing and had a big one. I tried to give the shoulder a go but it was just too weak from the impact on the first crash and kept popping out in the second qualifying. I tried to go out there for the first moto but it wasn’t worth the risk/reward for the day. We are going to get it evaluated on Monday – I am going to take my health seriously now and hopefully come back strong next year.”

Based on his final remark there, it seems most likely that Swoll will not compete at the final two rounds of 2021 Lucas Oil Pro Motocross. If that does indeed end up being the case then RJ Hampshire will be the team’s sole representative at both Fox Raceway and Hangtown. The team started the summer with six riders, three in each class, and just one remains now. Swoll has the luxury of looking to the future, as it’s known that he has re-signed with Rockstar Energy Husqvarna Factory Racing for the 2022 season.

Dean Wilson, who was the only FC 450 rider on track for much of the summer, withdrew from the series prior to the Ironman national in order to recover from Epstein-Barr Virus. The illness had hindered him for much of the summer. Jason Anderson, who broke his hand in June, was rumoured to be returning for the final two rounds, but it now seems unlikely that he will race again this year. Anderson’s rumoured to be heading to Monster Energy Kawasaki in 2022.