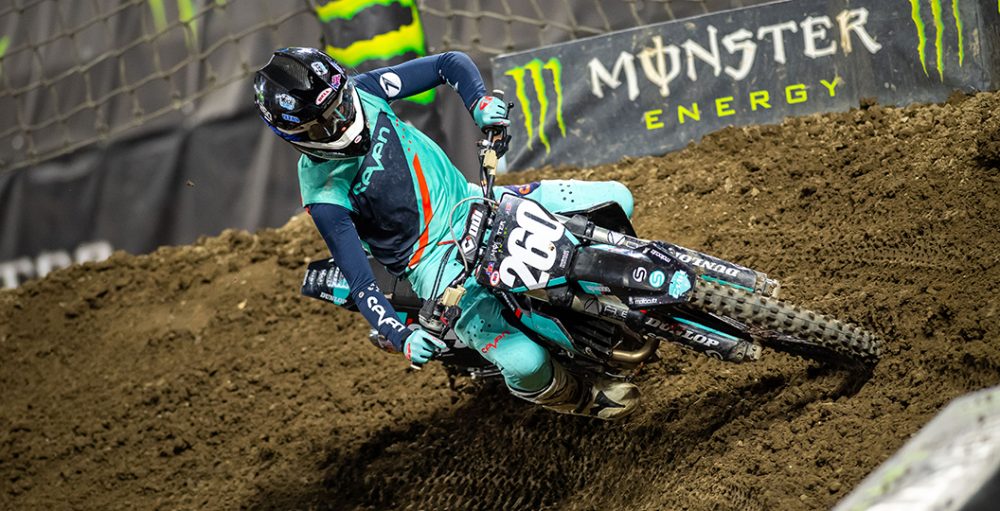 Dylan Woodcock out of Glendale, to return at Anaheim 3.

Dylan Woodcock had become a regular contender for a spot in the main in 2022 Monster Energy Supercross, but a string of cruel luck caused his momentum to grind to a halt at Anaheim 2 over the weekend. Woodcock was two turns from transferring to the main in the heat race, before an incident with another guy forced him to head to the 250SX LCQ. A crash in the first turn of that race forced him to head back to the pits with an injured knee.

“I thought I had the holeshot in the LCQ and ended up going down with a lot of riders, which twisted and popped my knee pretty good. Hopefully get an MRI this week to see what the damage is.”

Said MRI did not show anything too serious, but the damage is significant enough to force him to miss the fifth round of 2022 Monster Energy Supercross this weekend. Woodcock confirmed that he ripped the cartilage in his knee and suffered bone bruising; he will rest over the coming days in an effort to put himself in the best possible position at Anaheim 3 in one week’s time.

“Unfortunately I will not be racing this weekend in Glendale, due to the LCQ start crash my knee isn’t 100%. I completely ripped the cartilage in my knee and the bruising on the bone isn’t great, but it could always be worse. The plan is to race A3 to end on a high before heading back home to the UK.”

Woodcock missed the main event at Anaheim 1 – he finished seventh in the LCQ – and then rebounded to finish nineteenth in the main event in Oakland. Eighteen was his ranking the following week in San Diego. Woodcock sits twenty-fourth in the 250SX West standings, entering round five of ten.