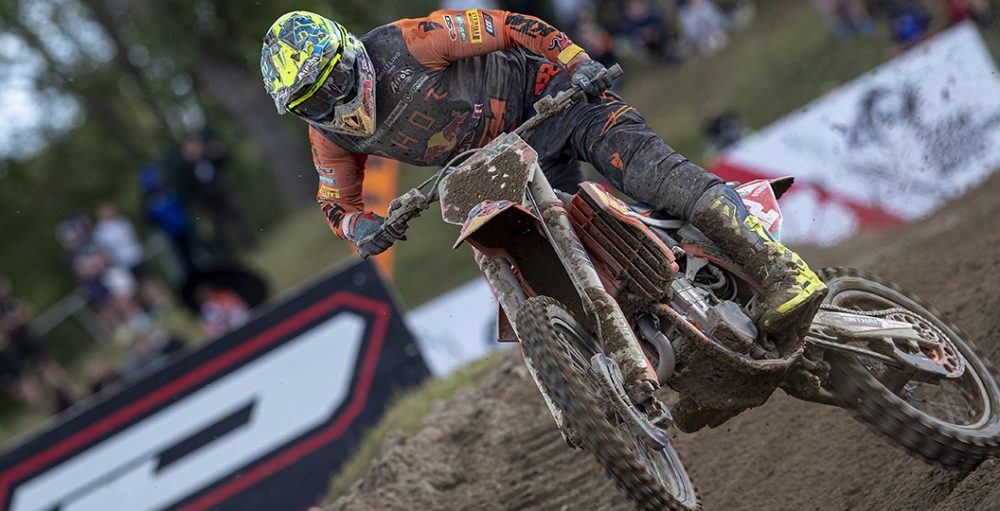 Fans were concerned when television footage showed that Antonio Cairoli’s chest was drenched in blood at the conclusion of the second premier-class moto at the Grand Prix of Lombardia. The blood didn’t generate from his chest area though, instead it was from his nose. Cairoli had a nasty fall on one of the uphills and broke his nose, but still soldiered on to salvage six valuable championship points. A statement from Cairoli, via the Red Bull KTM Factory Racing outfit, can be found below.

“Today started good and I was happy with the third place, because the track was pretty sketchy. It was positive to take those points. My start was not so bad in the second moto but when I was coming across some riders to make positions I clipped the wheel of another and crashed. I had to come back from last and use the Goggle Lane, because my roll-off was finished. I was feeling great and pushing. I had another fall when I went sideways on the first uphill and hit my face quite heavily. I wanted to keep going for some points. Of course, it is not the result we want – we must avoid mistakes. I broke my nose but it could have been worse. We did not keep the red plate but we’ll be ready to go again and try for the podium on Wednesday.“

Antonio Cairoli spoke about the injury at length in the MX Vice post-race podcasts, presented by FLY Racing, from Mantova 1. Five measly points separate Cairoli from the new championship leader going into Wednesday.