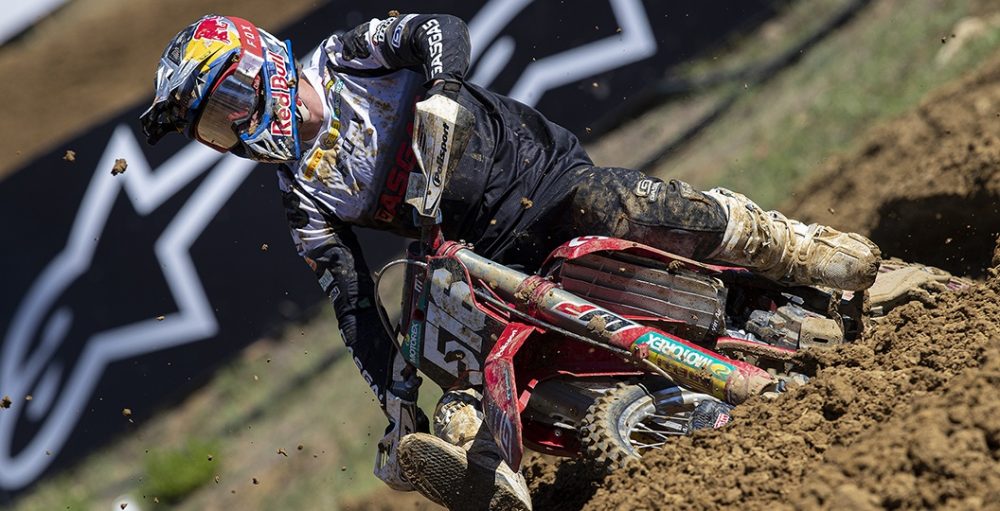 The slick hard-pack surface of Faenza, in Italy, has claimed a handful of riders this week, which means that the injury list is looking a little longer than it did a week ago. Who will not race at the Grand Prix of Emilia Romagna on Sunday? A complete list of riders updates can be found below. This will be updated until the first gate drop, so stay tuned as more information comes to light. Need to know something for MX Manager? Contact us on social media (motocrossvice on Twitter).

Ben Watson: Ben Watson crashed hard at the end of the first moto, and was left needing stitches in his chin and lip. Watson was also left with a black eye and loose teeth, but will be on the line on Sunday.

Mathys Boisrame: Mathys Boisrame did not sustain any broken bones in his crash on Wednesday, yet will not take to the track on Sunday as a precaution. Boisrame isn’t ready to battle with the best in the world, according to F&H Racing.

Mikkel Haarup: Mikkel Haarup was lucky to escape without any broken bones, after colliding with another rider in the air on Wednesday. Haarup was just shaken up in the fall, but F&H Racing have also decided to have him sit out on Sunday.

Jeffrey Herlings: Jeffrey Herlings fell in free practice at the MXGP of Citta di Faenza and was left with a “pretty big compression of the neck, vertebrae and a haematoma of the shoulder.” It’s already been confirmed that #84 will miss the next Italian triple header at Mantova.

Jeremy Sydow: Jeremy Sydow broke his ankle without even falling in his return to racing last Sunday – all it took was twisting his foot in a rut. There is no timeline on his recovery, but his first term as a GASGAS pilot may be over.

Anton Gole: Anton Gole twisted his left foot at Faenza 1 and an x-ray at the track showed ligament damage, so he is out. There is also a bone splinter on the back of his heel, it seems, so there was just no way he could push through the pain. Cornelius Tondel has taken his spot for Faenza 3.

Bas Vaessen: Bas Vaessen has a bulging disc in his back and is not ready to return to racing, although he is back on a bike and riding. Expect to see him at the next Italian triple header, which is scheduled to start at the end of this month.

Adam Sterry: Adam Sterry fell on Tuesday and suffered some slight internal damage, which has ruled him out of the Faenza triple header. Sterry believes he will be ready to go in a little over a week, so returning for Mantova will not be a problem.

Shaun Simpson: Shaun Simpson was battered and bruised following a crash at the Grand Prix of Latvia, the first part of the triple header, and had not quite recovered in time for Faenza. Another practice crash at Lommel this week has left him with two broken “two thoracic vertebrae.”

Benoit Paturel: Benoit Paturel had a nasty crash over the finish jump at the Grand Prix of Kegums, round five, and fractured his T12 vertebra – he also cracked his tailbone. Paturel is expected to be off of the bike for six to seven weeks, so Kyle Webster has been drafted in as his replacement at JM Honda Racing.

Simon Langenfelder: Simon Langenfelder was landed on in the first moto on Wednesday and suffered a lower leg injury, so one would think that his season could be done. The extent of the injury and the recovery process has not been revealed, but the Diga team has left the paddock.

Rene Hofer: Rene Hofer suffered a cruel blow at the Grand Prix of Riga, as a hard fall in the second moto left him with a broken left shoulder. The recovery time’s tipped to be between two and three months, which means that his maiden term as an MX2 rider is over. Red Bull KTM Factory Racing will sign a fill-in rider.

Pauls Jonass: Pauls Jonass had a very hard crash in June, which resulted in some broken ribs and five broken spinous processes. Further evaluations revealed that some vertebrae were damaged too. Jonass is wearing a neck brace still, so will not be back for a while. It’s quite unlikely that he will return this year.

Kevin Strijbos: Kevin Strijbos had surgery on a hernia in the first half of July, which forced him to miss the whole of the Latvian triple header. Strijbos is now back on a bike, which is good news, but is struggling with pain in his hip and back, so will not race in Faenza. There should be another update on his condition next week.

Iker Larranaga: Remember when Iker Larranaga crashed at Matterley Basin and fractured his T7, as well as some other injuries? Well, Larranaga recovered and then fell again a week before the Grand Prix of Latvia. The C2 vertebra was broken and needed emergency surgery. There’s no timeline on his recovery, but 2020 is over.

Wilson Todd: Wilson Todd sustained a hand injury at the Grand Prix of The Netherlands back in March, as well as a torn ACL and fractured tibia. Todd has not yet managed to recover fully – it should not be too long before he hits the track again though. DRT Kawasaki are not present in Italy, as they have no riders.