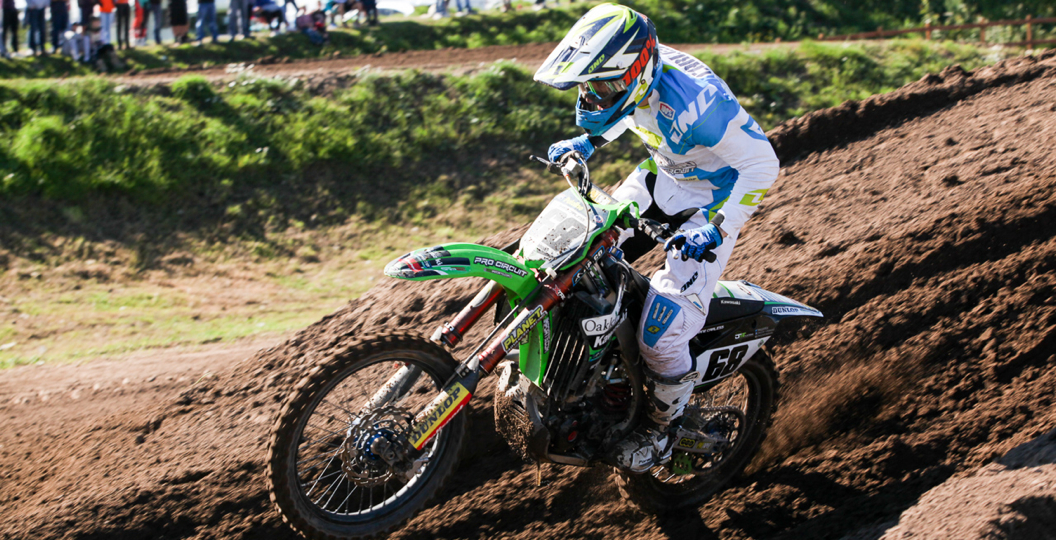 The penultimate round of the MX Nationals this past weekend went to Lancashire’s famous Preston Docks facility, and while Oakleaf Kawasaki’s Priit Rätsep continued his campaign for domination at home, Shane Carless made the trip up the M6 to the sand track just outside Preston.

After some difficulties bedevilled Saturday’s activities and all racing cancelled for the day, qualifying finally started late on Saturday afternoon, during which Carless ended fourteenth. Sunday morning got under way well though; Carless got out of the gate in ninth. Before settling into a groove, Carless lost two positions, which he recovered soon after to go after Jamie Law in seventh. Time ran out, and Carless had to make do with eighth.

The second race of the day ended before it really got going. Out of the gate mid-pack, Carless was soon in tenth when a mistake pile-drove him into the ground, dislocating his shoulder in the process. That spelled the end of the day, leaving Carless in sixteenth overall.

I’m absolutely bummed! I crashed hard in the last moto at Preston Docks and dislocated my shoulder! I was happy with my riding, I felt back to my normal self, but one little mistake just cost me big!

I’m gutted for Shane! No matter how hard he’s tried this season, nothing has gone his way. I think the full time deal has played a big part of it, from the normal forty-hour working week, maybe the big change in his normal life put him under more pressure being fully involved in motocross. I believe he has something special as we’ve all seen what he was capable of last season, but this season just didn’t work out and we all learn from it. I would love to see him back at Foxhills, but we will see what the doctor advises at the next appointment.