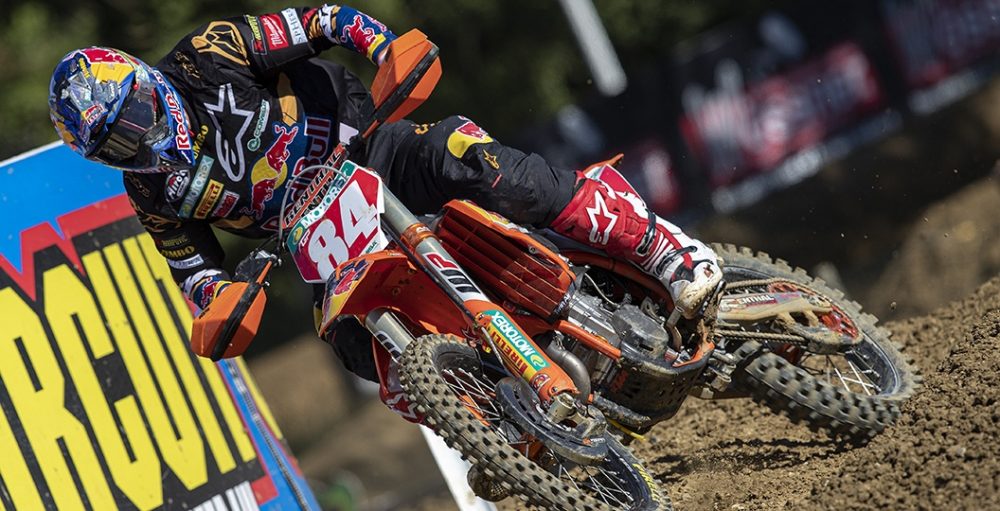 Red Bull KTM Factory Racing’s Jeffrey Herlings will sit out the Grands Prix of Lombardia, Citta di Mantova and Europe from September 27-October 4 to undergo another MRI scan in the wake of his crash during Free Practice for the Grand Prix of Citta di Faenza last Wednesday.

The current MXGP FIM World Championship leader and winner of four rounds from seven so far in 2020 fell and suffered a large impact to his neck and shoulders at the Monte Coralli circuit on Wednesday morning. The soon-to-be 26-year old was taken to a hospital in Bologna and then to Herentals in Belgium where he was examined by renowned and trusted surgeon Dr Claes.

While Herlings was fortunate to escape serious injury, the hard landing means he needs to rest and monitor the state of his upper torso in the next two weeks. He is due to have another MRI on September 29th. The date means he will miss the next four rounds of the series. The Mantova circuit will stage a triple header in one week at the end of this month.

Dirk Gruebel (Team Manager and Technical Co-Ordinator): “While it was a scary crash we have to be thankful that Jeffrey was not badly hurt. The first scans are positive when you consider the injuries he could have picked up. He is a really tough guy and has been through this process before. It is frustrating because of the good work he’d done in the championship standings but it is the negative part of the sport we have to accept. Hopefully the scan in a few weeks will show his recovery is going in the right direction. All the team will miss him until he’s back on the bike and doing what he does best.”

Finally! The official word on Jeffrey Herlings is now out, as KTM released the following statement and quote from Dirk Gruebel.

Jeffrey Herlings sat out the Grand Prix. The Dutchman crashed during free practice when he landed awkwardly from the second jump of the course, taking most of the impact on his upper body. Herlings was taken to a nearby hospital for an MRI on his head and neck and to also examine some pain to his shoulder. The 25-year old (26 next week) was conscious and had full feeling across his body. The trip to a clinic in Bologna was seen as precautionary measure and the team are waiting more updates. Herlings still holds the red plate.

Dirk Gruebel (Team Manager and Technical Co-Ordinator): “Jeffrey went down on the fourth lap of free practice and hit his head quite hard. He regained feeling in his arms and legs pretty quickly but still went to Bologna for full body scans. We have yet to see the results, but he has been released from hospital. We’re talking about a pretty big compression of the neck, vertebrae and a hematoma of the shoulder. He’ll get back to Belgium tomorrow for some more examinations and hopefully it is not that dramatic. It will take a couple of weeks to recover but we cannot give an exact date right now.”

“Herlings out of Citta di Faenza GP after free practice crash. The MXGP World Championship leader has been taken to a local hospital for an MRI check on his head and neck. He has movement and initial signs are positive. More news soon.”

Jeffrey Herlings crashed out of MXGP free practice at the MXGP of Citta Di Faenza today and is out of the Grand Prix. Herlings has pain in his neck, but can move everything and is being transported to a local hospital (around an hour away) for more detailed x-rays. More will become clear there about his status for the upcoming rounds, but the fact remains that he is out for today.

Herlings will still have the red plate at the end of today, as he leads by 60 points over Antonio Cairoli.