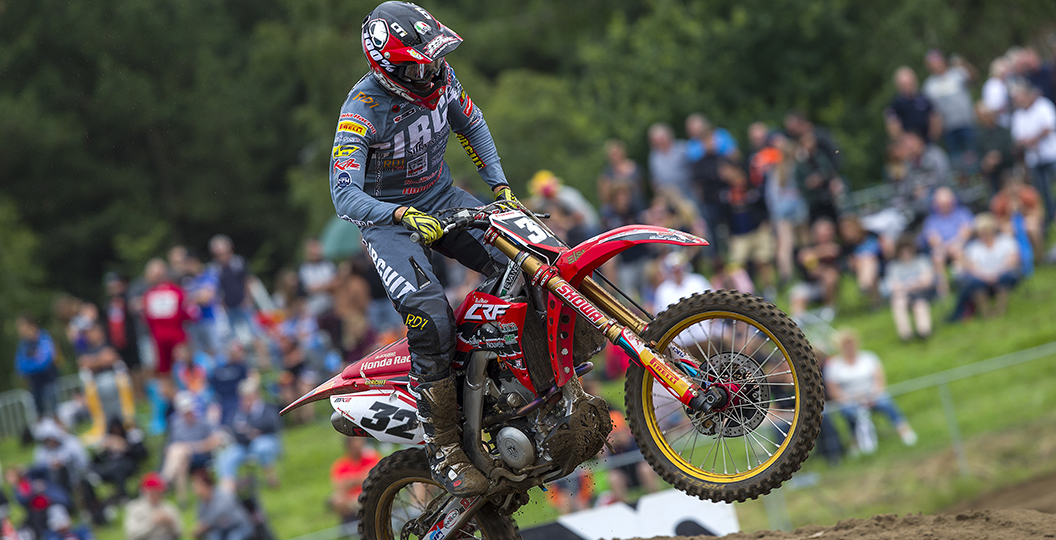 Although the 2019 FIM Motocross World Championship is winding down, there are still plenty of updates on those who are currently battling injuries. Twenty-two updates can be found in the list below. Seeing some exciting talents return to the starting line is the perfect way to spice things up with just four rounds to go. Imagine when Jeffrey Herlings finally hops back onto the track!

Tommy Searle: Tommy Searle suffered a minor hand injury that stopped him from lining up at the previous round in Belgium, but he will compete at the Grand Prix of Italy. Searle raced in Great Britain last weekend, so is obviously not struggling with the ailment too much. This will be his third race under the KRT banner.

Mitch Evans: Mitch Evans has only claimed fourteen points since the Grand Prix of Latvia, as countless hard hits have put him in a difficult position. Evans has taken the last couple of weeks off in an attempt to jump back to his former level but will return to the world stage this weekend.

Zach Pichon: Zach Pichon will complete the Honda 114 Motorsports line-up this weekend, as he will return from the rib injury that he sustained at the Grand Prix of Czechia. Pichon seems to be quite optimistic that he will be able to return and score points this weekend.

Alessandro Lupino: Alessandro Lupino has had a tough time of it since his return from the back injury that he sustained at the Grand Prix of Russia, which forced him to withdraw from the Belgian stop prematurely. Lupino will be back at it at his home event this weekend.

Dylan Walsh: Dylan Walsh was keen to make an impression at the Grand Prix of Belgium but fell during time practice and bruised his shoulder. Although the injury stopped him from racing on that weekend, he is now back to one hundred percent and ready to push towards the top ten.

Anthony Rodriguez: Anthony Rodriguez sustained a back injury at the last race that was going to stop him from competing in Italy and then Sweden next week. That is what the BOS Factory squad said, anyway. It turns out that Rodriguez is fine though and has actually moved onto a new team, Hutten Metaal Yamaha.

Brent Van Doninck: Brent Van Doninck crashed and suffered a concussion in practice at the Grand Prix of Belgium, but later checked out okay and was even eager to race on the Sunday. The FIM doctor stopped him at that point, but he will be back on track this weekend.

Jed Beaton: Jed Beaton was sidelined before the Grand Prix of Belgium, as he fractured his sternum without even crashing. There is currently no timeline on his recovery nor is there any firm information. It is definite that he will not line up at the Grand Prix of Italy though.

Davy Pootjes: Davy Pootjes injured his ankle in a crash at the Grand Prix of Latvia, but later returned at the Czech round in July. Another incident at that event sidelined him again though and he is therefore watching from the sidelines. There is no timeline on his recovery.

Bas Vaessen: Bas Vaessen was involved in a horrific crash at the start of the second moto at the Grand Prix of Asia and initially lost feeling from the neck down. The feeling eventually returned, thankfully, but he has to wait for a broken C6 to heal before he can return to riding.

Michele Cervellin: Michele Cervellin fell at a round of the Italian Prestige series and dislocated his wrist, so that effectively ended his 250F career early. Cervellin is not expected to return before the end of the season and he will therefore miss his home Grand Prix this weekend.

Julien Lieber: Julien Lieber was en route to a career-best finish at the German fixture, but a crazy crash left him with a fractured elbow. Lieber will skip the rest of the current campaign and move on from the Monster Energy KRT outfit in the off-season.

Antonio Cairoli: Antonio Cairoli dislocated his shoulder at the Latvian round in June but did not think much of it initially. It later came to light that surgery was needed, however, and that effectively ended his season. Cairoli will be back next year and chasing that tenth world title.

Jeffrey Herlings: Jeffrey Herlings will not sit in the injury column for much longer, as he is expected to jump back into the world series at the Grand Prix of Turkey in a few weeks. It was initially thought that he would be able to race this weekend, but it is just too soon. There is not long to go now though.

Benoit Paturel: Benoit Paturel has been missing since the Grand Prix of Latvia, where he injured his leg. It was later determined that he has run into the Epstein-Barr virus, like so many others, and therefore he will not race again this year.

Clement Desalle: Clement Desalle underwent surgery following the Grand Prix of Russia, in order to repair the broken fibula that he sustained. A sprained ankle was also picked up in the vicious fall. Desalle is set to miss the rest of the current term.

Evgeny Bobryshev: Evgeny Bobryshev limped onto the sidelines after the Grand Prix of Russia in June, as he required surgery on his wrist and broken right tibia. A significant recovery time was then needed, of course, and he is not even close to getting back on a bike yet.

Alexander Brown: Alexander Brown was a fill-in rider for the Hitachi KTM squad, but crashed at the Grand Prix of France and aggravated an existing shoulder injury. Brown is making progress, which is great, but will not make it back before the end of the year.

Conrad Mewse: Conrad Mewse crashed in April and sustained a complicated wrist injury. Progress is being made, but there is still a long path ahead of him. There is no set timeline on his recovery, but it is likely that he will be back on a bike after Christmas.

Jose Butron: Jose Butron shattered his ankle in testing in April and will skip the rest of the Grand Prix term. The injury is quite severe, and he is still hobbling around with help from crutches. Butron is determined to return next year.

Nathan Renkens: Nathan Renkens started his own squad in the winter but did not get far with it. Renkens crashed at the Grand Prix of Europe and sustained a torn ACL. It is hardly surprising that he is not going to make it back before the end of the year.