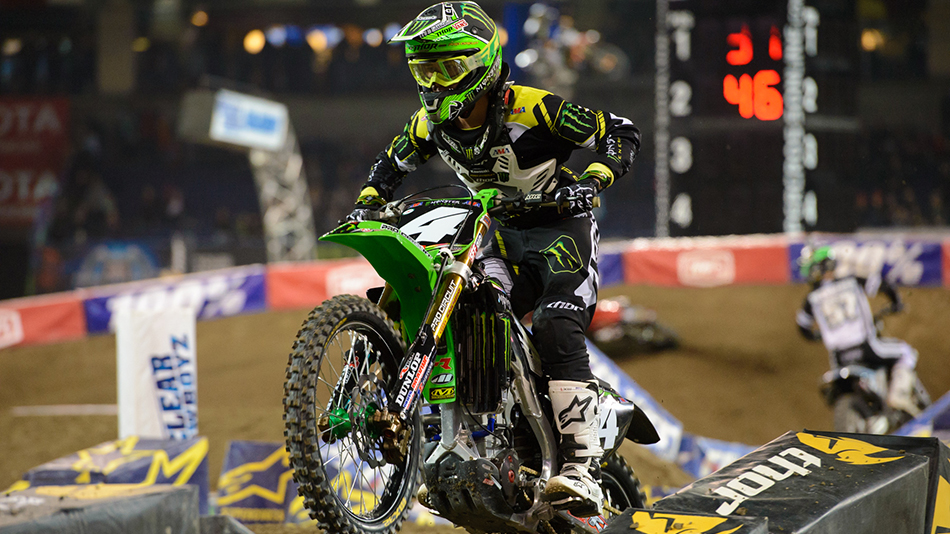 CORONA, Calif., (April 24, 2014) – The anticipated return to action of the 2014 Monster Energy Supercross 250SX East Region Championship will unfortunately take place without the participation of Monster Energy/Pro Circuit/Kawasaki following a string of injuries to its three riders. With rookie Adam Cianciarulo already sidelined for the remainder of the supercross season with an injured shoulder, fellow title hopefuls Martin Davalos and Blake Baggett will also sit idle as the series makes its anticipated return to the New York area with the inaugural visit to MetLife Stadium in East Rutherford, N.J.

“It is a shame that we had all of our guys get injured on the East Coast,” said team owner Mitch Payton. “We were in a great position to win another title and I feel for Martin right now. He has already had surgery and is going to push to get back as soon as he can. With Blake we didn’t want to risk anything, so we are going to make sure he can ride with the contact lens and hopefully he can come back and get a win in Las Vegas.”

The East Region effort for Monster Energy/Pro Circuit/Kawasaki was enjoying one of its most dominant seasons to date leading into New York. Collectively Davalos, Cianciarulo, and Baggett helped the team top the charts in every practice through the first seven rounds, win all but one heat race the team was entered in, and put at least one Monster Energy/Pro Circuit/Kawasaki bike on the podium at each stop. Additionally, the team boasted a pair of podium sweeps at AT&T Stadium in Dallas and at the legendary Daytona Supercross.

Arguably no rider in Monster Energy Supercross was looking forward to racing in New York more than Davalos, who enters the eighth stop of the nine round championship as the points leader and most recent winner. Davalos was in the midst of a breakout season, securing the first two wins of his veteran career and amassing an undefeated record in heat races. During his continued training in pursuit of a first career title, Davalos crashed while testing earlier this week and suffered a broken ankle. He’s already undergone surgery to repair the injury, but will not be able to compete this weekend to defend the red plate.

“I’m just so heartbroken right now, it’s hard to really put it into words,” said Davalos. “This season was going exactly the way I had hoped and all the time and effort we’ve put in to making the Kawasaki KX250F fast was paying off. I’m trying to be positive because we were doing the right things, but this is a tough one to swallow for everyone. We won’t get the chance to finish what we started, and that stings. This is the brutal reality of our sport at times and it’s not going to be easy to watch everyone line up on the gate Saturday night without me.”

Baggett Takes Rock to the Eye

During the brief break in action between the previous round of the East Region Championship in late March and this weekend’s race, Baggett took advantage of the opportunity to prepare for this summer’s AMA Pro Motocross Championship. While testing at the site of the opening round of that championship at Glen Helen Raceway in San Bernardino, Calif., Baggett was hit in the eye with a rock, resulting in a deep laceration on his eyebrow. Baggett was stitched up but has continued to battle vision problems ever since. Despite his hopes that the issues would subside in time for this weekend’s race, Baggett has been forced out of action, halting an otherwise solid season in which he’s earned one win, four podium results, and shown an incredible ability to overcome virtually any adversity thanks to an unmatched tenacity on the track.

“When it happened I didn’t think it would be such a serious problem, but my vision in that eye has been messed up ever since,” said Baggett. “We’ve been strong this season and while the results haven’t always shown how well we’ve been racing, I was looking forward to putting the Kawasaki KX250F back on top of the box at least once more. I don’t know what it’s going to take to get back to where I need to be, but I’m doing my best to be patient and just take everything one day at a time. I’m definitely bummed to miss out on New York, because I know it’s going to be incredible.”

Baggett currently sits in a tie for third in the East Region standings with Cianciarulo, and faced a 29-point deficit to Davalos in first.

With no set timetable on either Davalos or Baggett’s injuries, the team will be ready to return to action at the final round of the Monster Energy Supercross season in Las Vegas next weekend. While the final round of the East Region and West Region Championships will take place, Las Vegas will also serve as the lone opportunity for the entire Monster Energy/Pro Circuit/Kawasaki team to converge on a supercross track. While Davalos focuses on recovery and returning to action as soon as possible, Baggett will hope to join his West Region counterparts Justin Hill and Dean Wilson in the annual East/West Shootout.