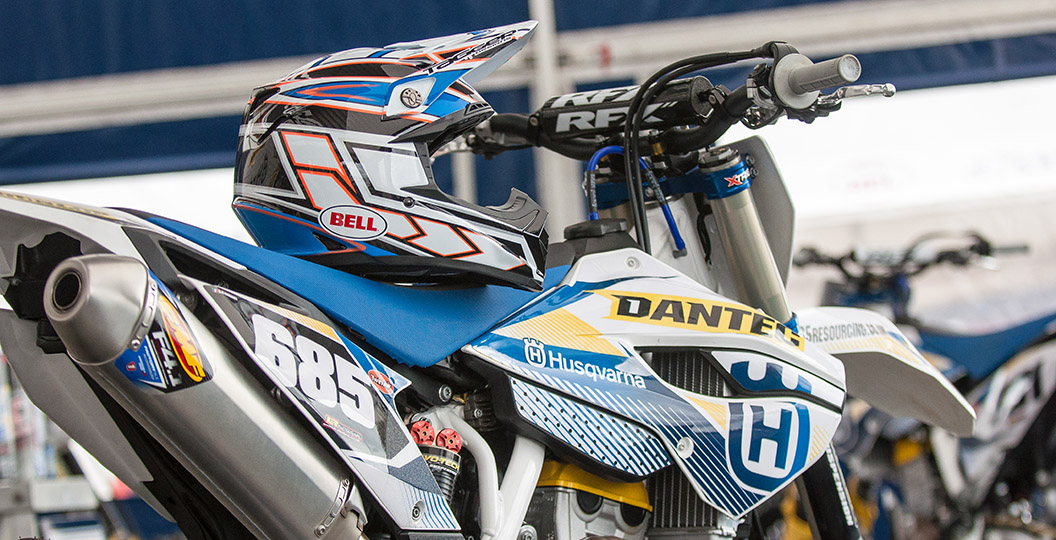 Unfortunately, Dantec Husqvarna UK is another team that will not be around in 2015, as they have elected to take a step back after a handful of very successful seasons with riders like Neville Bradshaw, Steven Lenoir and Nathan Watson.

However, with Evotech gaining more momentum each year, Matt Hutchins, the team owner, has elected to focus mainly on that in ’15, as more and more people look to him for suspension and engine work. We caught up with him to discuss that, as well as get his views on the 2014 season as well as the state of the sport.

MX Vice: What was the reason for stopping the team at this point, after just winning the MX Nationals title with Nathan?

Matt Hutchins: Really the team has just been a part-time thing for us. In the first place we started it up just to promote Evotech and I ended up hooking up with Nev [Bradshaw], who didn’t have anything at the time. It got bigger from there and now it is at this stage and I never really envisaged it getting to this point. It really is a full-time job in itself.

It is well over half of my time and it takes up ninety percent of my top mechanic’s time. Our suspension guy spends about twenty-percent of his time on it and when we worked it out as an actual cost, it is a lot.

MX Vice: I guess a number one plate is nice, but it doesn’t pay the bills.

Matt Hutchins: Yeah, it is nice. It is something that we have always wanted to do. It is just a shame the way that the British championship worked out this year, because I thought we had a good shot at it with Steven [Lenoir]. We should have won the first round at Landrake, but he got his foot caught in his back wheel and flipped over the bike. Then the last round at Foxhill, it was brilliant to win the last moto, but again, it was probably the best chance we had at winning an overall.

MX Vice: The team never won an overall in the British championship, right? Obviously you had a few moto wins with different guys.

Matt Hutchins: Steven won two motos last year and then we had a couple again this year, but no overalls. We had three guys this year and got two championships; the amount of wins was quite good as well. Nathan obviously won five out of seven at the MX Nationals and I think Steven won more individual motos then anyone else in that series too. We had a couple of bike problems along the way, but to be fair, Matiss [Karro] has been so strong this year. I think both Nathan and Steven still need to work on their starts.

Even when they have been getting good results they haven’t necessarily been coming from good starts. The trouble was that the British championship format did not suit either of them, too. I think doing the MX Nationals with the split practices and warm ups suited them a lot better.

MX Vice: So you are actually a fan of the MX Nationals? Do you think the British championship needs to mirror that format?

Matt Hutchins: Yeah, definitely, one hundred percent. Why run a championship across one day, which stresses all of the mechanics out and teaches the riders to ride in a way that isn’t relevant to them moving forward in Europe? It doesn’t work.

MX Vice: Did it work out costing you guys more to do the two days at the MX Nationals though?

Matt Hutchins: I think it depends on the individual team. For us it didn’t make any difference, because we stay in the truck and don’t pay hotels, so I think it is better to do it that way. It is a lot to put the awnings up and everything for one day. I think if you are there for the weekend it is a more enjoyable experience and particularly for the riders; they are more relaxed.

If you look at the riders in the MX Nationals, in comparison to the British championship, all of the top guys were there in MX1 except for Shaun Simpson really. So, for Nathan, you can see where he was in the British and then in the MX Nationals, because the format suited him a lot better. He could always come through, even if his start was not fantastic.

MX Vice: Did you see it as a bit of a risk moving Nathan up into MX1 this year, especially after he came on so strong in MX2 last year?

Matt Hutchins: I think the biggest advantage that we had last year was that we had spoken to Nathan before he had that win at Hawkstone about riding the 450F this year. After that win everyone was interested in him, but then he didn’t have fantastic form through the first GPs he tried, which put everyone off a little bit. But, for me, if I see someone ride and it excites me, it doesn’t matter if the next couple of results aren’t great. I always thought he would ride the big bike well, because he did every time that I saw him on it.

MX Vice: Heading into 2014, were you expecting him to win a title?

Matt Hutchins: No, I wouldn’t have said for the first year. But then, to be honest, after the first bit of testing that we did in Spain, every time one of the GP riders showed up he was just as quick. That was on hard pack too, which is his weakness. By the time that we came back from there I was pretty excited to get to the races, because every time that we made an adjustment on the bike he was getting quicker and quicker.

MX Vice: So, it was purely the cost and time lost that has prompted you to stop the team?

Matt Hutchins: It is that, but, like I’ve said to everyone, we had the budget to run again. Husqvarna offered us a really good deal and all the sponsors were happy to stay. But from a business point of view, being in new premises, we needed to run for a year without the team to see where we are. That was the biggest thing. The overall expense of it is an issue, but the budget was in place to move forward. For me, I really need a year with Evotech to push it forward. We are really busy here, but trying to juggle the team and that meant that there was a time issue.

MX Vice: Does that mean that at this point next year you may revaluate and look at running the team again? Would you come back, but on a smaller scale?

Matt Hutchins: Yeah, definitely. We have thought about it a lot over the last couple of months and we have experience with it now.  It all depends on the sponsors and who is available. I really like the MX2 class; it fits in well with our business plan. The majority of our engine work is with the 250F anyway, but we have had a fantastic year in MX1 too.

MX Vice: Finally, is there anything that you think the ACU could do to make it easier on the teams? There are a few people that have mentioned the TV coverage.

Matt Hutchins: Definitely with the TV coverage, but also to have the teams more involved as a promotional tool. At the moment you have to adhere to a very strict set of rules and it is very set in stone. There isn’t a lot of input with the teams and even if you do say something, you feel like nothing is going to really change. I personally believe that the format really needs to change. Their argument is that three motos is good for the public watching, but my argument is that there are no spectators.

The hard thing now, which I see here from a business point of view, is that the people that want to go and watch motocross are the people that already do motocross. What they won’t do now is give up their own racing to go and watch. So you have got to have those people there doing their races and then going to watch. At the moment I think they are trying to make the British championship into a show, but at the detriment of the actual racing.