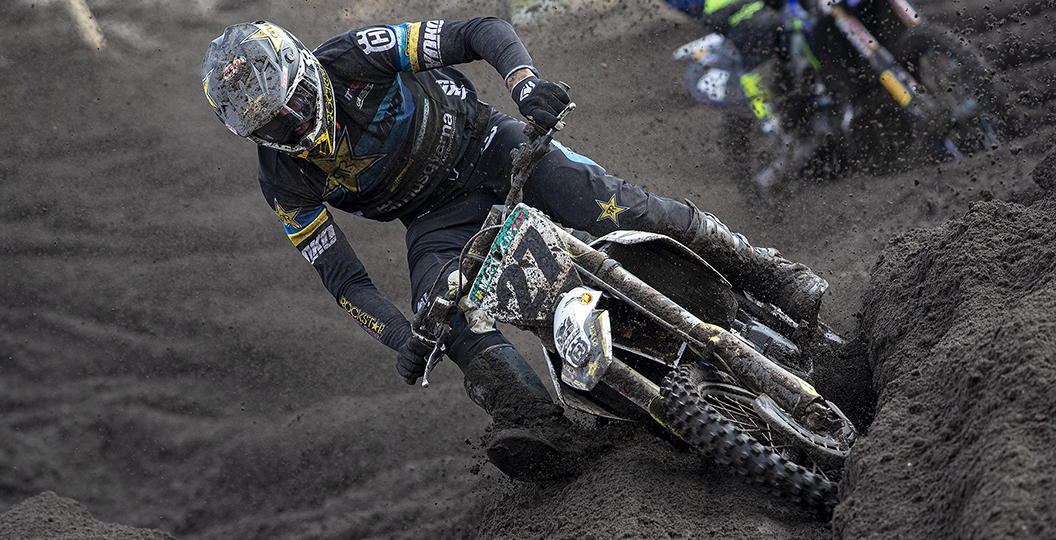 Antti Pyrhonen raised the level in the Grand Prix paddock at the first round of the 2020 FIM Motocross World Championship, as he debuted a new team truck for the IceOne portion of Rockstar Energy Husqvarna Factory Racing. The revolutionary set-up caught the attention of onlookers across the globe. Why was there a need to drastically change the game and stray from the traditional awning? Pyrhonen explains that below, and then of course touches on the current situation in MXGP.

MX Vice: Before we move onto the bad things, we’ll start with the good stuff. Arminas Jasikonis got on the box the last time we raced and, talking to him afterwards, it was clear just how important it was for him to get that monkey off of his back. That was big, huh?

Antti Pyrhonen: Yeah, for AJ the podium was about to come. He was very fast at many Grands Prix last year and really strong, but at the crucial moment there was a really bad start or a crash. It was a possibility to get that many times and it didn’t come, so then he would push even harder and it still would not come. It was like he was stuck in a circle.

At Valkenswaard he was right up there in all the sessions – he was either first or in the top three in every session. He was able to put it together. I am really happy for him and happy for the team. I have a feeling that he can do many more of those.

Pauls Jonass has the potential to do that too but watching him at first two rounds I almost felt like he was forcing the issue too much. Maybe he wanted to come out and make a statement a little too much?

Yeah. Pauls has the capacity to get on the podium as well, for sure, and he already showed that last year with his three podiums – he had a really good winter too. Both of the guys had a really good pre-season, and they were fit and fast. There was nothing that could stop them. It was a tough start for Pauls though, as he basically crashed in every moto. That eats the result in the MXGP class. In every moto he showed really good speed and fighting attitude, but he had silly crashes and they kept happening on the first lap.

If you crash after halfway, or in the last ten minutes, then the gaps are so big that you could even keep your position. He pushed really hard off the start though and then either touched another rider or made a mistake himself. When you think that he started each moto outside of the top 25, then he actually did a good job to even get between tenth and fifteenth.

What about the new truck? That is the most important thing! Where did that idea come from and what made you want to look for a change?

It’s quite a simple thing really. We have been searching for a way to win time on the build-up of the tents for some years. The testing, training and work at the workshop is so intense and time consuming that it was tough to get the time to have everything complete to be in the MXGP paddock on Thursday. The first time training was around lunchtime on Saturday, so it was a bit frustrating for us to have a major part of the team already at the track on Thursday.

You lose a lot of work time. We are basically able to set our paddock space up with one truck driver now, and that is done in less than an hour. We will win one work day for each person at every MXGP round. That is a big thing! You get one work day back for the entire crew that they can spend at the workshop, at the test track or whatever. It is really functional and way more effective on Sunday evening when it’s time to tear everything down.

When it is the summer and the sun is fully on the tent, it can be up to 40 degrees inside the tent. It is really tough for the mechanics to stay focussed when it is like that. The new unit has air control on the inside so you can put the heating on or the air conditioning on. The working conditions are always optimal! All of this is good, and now it is actually looking really good as well. It is really a win-win situation.

Speaking of the mechanics, what are they doing at the moment? Is there anything that they are able to do in this big break? Are there people in the workshop or is there really nothing to do now?

We actually did quite a lot of work after Valkenswaard. We prepared everything to go to Argentina, first of all, and then the race was postponed, so we took everything out of the crates. We serviced the Valkenswaard bikes and built up some further race bikes. We actually went to RedSand with the training mechanics to do some training before Argentina, but obviously once it was cancelled we just came straight back.

We did some preparation with the bikes and parts in the workshop for some weeks, but now more or less the work is done. The mechanics are mainly at home. They come to the workshop to do some bits and pieces occasionally, but we have done all we can do at the moment.

We have seen a lot of different MXGP calendars in the last month. It is always changing and there are a lot of rumours. What do you think will happen and what would you like to see? Would you be happy with a 12-round championship or do you just want it to end before 2021?

I won’t start guessing anything. We need to see when the corona situation is either better or gone, then we will see what month we can restart. I hope that we can still make a good compact championship that ends this season. I hope for this. I hope that we can all get back to our normal lives, most of all, and go to the training tracks before eventually getting back to some races. Whatever the calendar ends up as, I will just be happy that we are back to normal and back racing. This is all that I am waiting for.

If the series runs until the end of November and we still start at the end of February in 2021, do you think that make the off-season quite difficult or do you still that three months is plenty of time?

No, I don’t think it is going to be that big of a trouble. It is obviously going to have a bigger impact on the riders who are changing teams. Whatever the situation is though, we just need to cope with it and make the best out of it. None of us knew that this type of corona crisis was going to hit the world, and now we need to sort it out and get rid of it.

We need to get back to work and then whatever the championship ends up being then we need to just cope with it. We just need to be happy that we are back racing, and then prepare so that we are strong coming into 2021.

Last thing. Both of your riders are still up and coming in a way, there is definitely untapped potential there. Do you believe that they can both win GPs? It is quite clear that they have the speed to do that. I guess it is just a case of polishing that and making it all come together as a package, right?

Yeah, exactly. Both guys are still young. Pauls is in his second year in the MXGP class, and last year was the first consistent year that AJ has had. There is a lot of potential with both guys and I believe in them. I believe that they can be frontrunners and eventually, when they get everything together, then they can battle for constant podiums and even race wins.