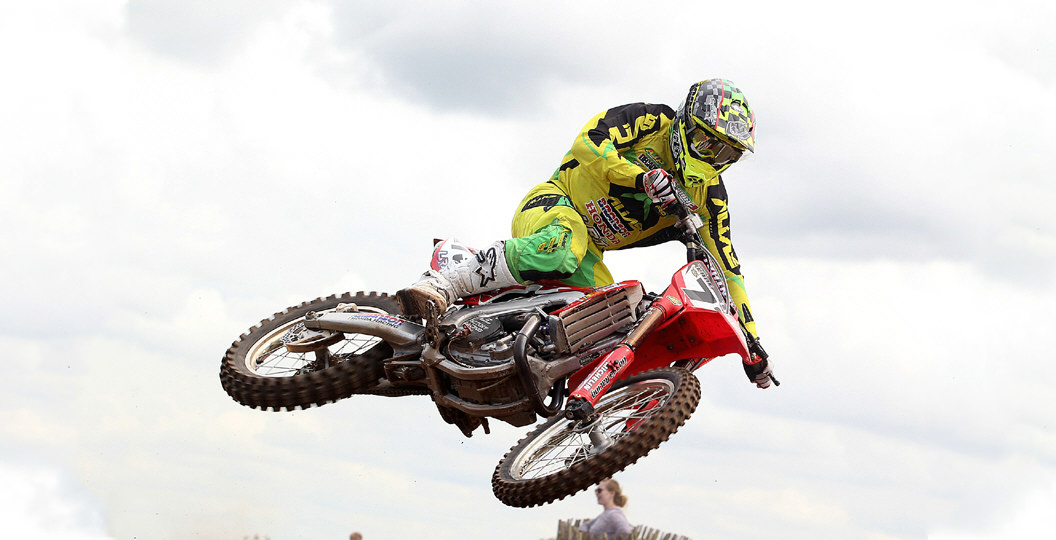 Buoyed by his super showing at Boraston the previous weekend during the latest AMCA British Motocross Championship action,Ryan Morris(Cradley Kawasaki) was on the podium yet again on Sunday as he scored a fantastic 2nd overall at the home round of the 2014 IMBA MX2 European series hosted by Mid Cheshire MXC at Norley. Although Ryan’s scorecard included a glorious moto one victory,he was though not the only Team AMCA Great Britain rider to star as Ryan Crowder(Rocket Centre Honda) took a great 5th overall and 17 year-old starlet Jack Gardner(FUS AMS KTM) was equally impressive in 6th on a stunning IMBA debut.Also making his IMBA debut was the vastly more experienced Lewis King(Wulfsport/NP Racing Suzuki) rider,getting home in 9th whilst Scott Mathia (Hazport/Wulfsport KTM) earned 10th.Indeed Scott also looked well on course for an eventual top six overall placing before encountering a frustrating last moto collision,his one consolation being that he has now jumped back to 2nd in the IMBA Championship standings.Of the remaining Brits on duty at Norley,young Welsh lad Cory McShane,a late replacement for Ben Saunders showed great determination to bag 15th whilst the unfortunate Paul Neale(Apico LPE Kawasaki) had to settle for 17th following a massive moto two crash!!.

Typically on a day that had started bright and sunny,storm clouds had then gathered with a heavy rain shower falling both before and during the opening IMBA clash,rapidly changing the available grip on some sections of the Norley circuit.Undeterred by those changes though,the Brits got off to an absolute flyer as Ryan Crowder grabbed a glorious holeshot with Ryan Morris in tow whilst in the early stages,Scott Mathia was 3rd,Jack Gardner 5th and Paul Neale 6th. The only Brit in trouble and not enjoying the best of fortunes was Lewis King,brought crashing down in turn one and then forced to stop and straighten his bent handlebars,Lewis restarted last and thus had it all to do!!.With the rain continuing to fall,the Brits were revelling in the conditions and by lap five it was the confident Morris now in control from Crowder,Mathia and Gardner proving that indeed Britain really as got talent!!.Although briefly Mathia then moved up into 2nd,unfortunately the race pattern was to dramatically change in the closing stages.Forced to discard his goggles,Mathia slipped back to a final 4th with Crowder suffering from severe arm pump dropping to 5th. At the front though the Union Jack’s were still flying high as much to the delight of the home supporters,Morris blasted to a deserved win despite a late challenge from the hard charging Dutch duo of Jarno Derks and Jacky Tausch.With Paul Neale taking 8th,early faller King produced a strong,impressive comeback to bag 9th at the flag as Gardner crashed and dropped back to 13th.On his IMBA debut,Cory McShane could be well pleased with his eventual 15th spot.

With the track now drying out following the earlier rain,current double IMBA Champion and series leader John Cuppen displayed his true class by leading moto two from gate to flag ahead of his Dutch teammate Davey Janssen.The Brits though were again really mixing it as Mathia slotted into 3rd with Morris 4th,Gardner 5th and King 12th.For Neale,moto two was to be a particularly painful affair,the Kawasaki rider suffering a massive crash in the early stages,injuring his left shoulder in the process!!.As the moto progressed,Morris got up to 3rd,inserting heavy pressure on Janssen but unable to make a pass stick as Mathia dropped back to 7th.So,at the flag it was victory to the stylish Cuppen from Janssen,Morris,Gardner,Hubers,Crowder,Mathia and King with McShane again a gritty 15th despite a fall.

After colliding with a Swiss rider on the opening lap of moto three and then struggling to free the front end of his KTM bike from the trackside roping,Mathia was relegated to last but upfront there was pure British joy as Jack Gardner bagged the holeshot to lead the charge.In great style,young Jack then held off the Dutch duo of Cuppen and Derks for seven rip-roaring high-octane laps.Eventually the Dutch duo though were to find a way through before indulging in their own no-holds barred battle with Cuppen just managing to stay ahead and thus take another vital win which edges him ever closer to a third consecutive IMBA MX2 title.The star of this moto though was Gardner who held on for a great 3rd with Morris confirming a richly deserved podium spot by finishing 4th.Having another impressive ride,Crowder got home 6th,King 9th and McShane 14th.Frustrated by that first lap excursion through the ropes,Mathia had to settle for 16th this time around whilst despite being in immense pain,Paul Neale bravely competed in moto three in an effort to gain more Championship points,eventually credited with a gallant 20th spot.

Producing some outstanding support action and full line-ups in both classes was round three of the AMCA 2T and Veterans Championships.In the 2T class,Aiden Wharton grabbed the moto one holeshot before Jamie Dobson took control.From here onwards,Dobson aboard his Underdog Racing KTM raced to victory despite the close attention of defending Champ Adam Harris,the hard charging Harry Bradley,Rian Warren,Josh Williams and Stuart Owen.After falling and then recovering from 32nd back to 12th in moto one,Kieran Mulloy was right on the gas in the second 2T clash at Norley.Shadowing leader Dobson for seven laps,Mulloy then got through before scorching to a great win as Harris,Williams,Owen,Will Hughes and Bradley were again in the frame.In a dramatic final moto,Harris led the first six laps before Dobson found a way through.However when Harris then attempted to respond and regain control, the two leading riders clashed with the Champion falling and dropping back to 3rd behind Hughes.Also making contact in a frantic moto three were Bradley and Mulloy with the former surviving that particular incident to claim 4th.

Not to be outdone the Veterans were also right on the gas at Norley but there was certainly no doubting the winner as the rapid and very stylish Simon Lane controlled all three motos from start to finish,his smallest winning margin being a mere 15 seconds!!.On each occasion,the determined Matt Ryder chased hard to claim the 2nd spot with Martin Atherton in 3rd.Although the above three riders were in great form,there was still plenty of super racing for the right to earn the remaining leaderboard placings with Stephen Baddeley,Colin Conduit,Shaun Copeman,Paul Wieczorek, Wayne Holder,Marc Bates and John Heath eventually completing the top ten overall.Next up for the 2T and Veterans aces is a trip to Spirt Hill in Wiltshire on July 20th.