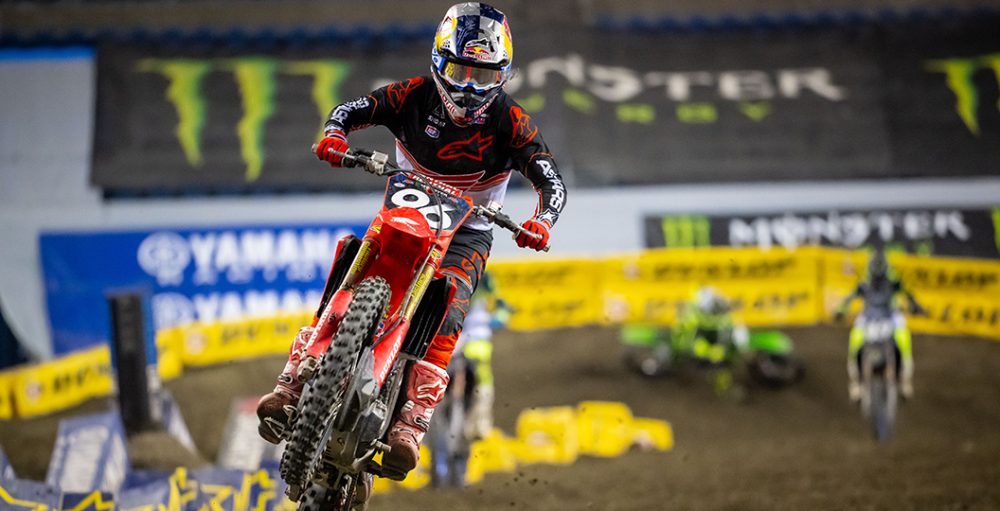 Remember when Hunter Lawrence encountered injury after injury when he first moved to America and could not establish any sort of momentum? Such struggles seem like a lifetime ago, as the Honda HRC star has started stacking wins in Monster Energy Supercross quite quickly. Seattle, the twelfth stop of the current campaign, was the site of his latest triumph. The victory helped him claw his way back into second in the 250SX West standings as well.

Sitting down with the media in the post-race press conference, which was run less than an hour after he hit the chequered flag, Lawrence talks about his five-week hiatus and where he is aiming to get better as he continues his upward climb in the United States. The older Lawrence brother is always one of the most insightful interviews in the paddock, no matter where is racing! The transcribed version of what he said is below, for those who would rather read.

Press Conference: The last time that we saw you at Anaheim, there was a big crash. We did not really hear what the five weeks were like for you. Can you just take us through it?

Hunter Lawrence: I had like two weeks off, just to let the body heal and all of that stuff. I was a bit banged up. I kept pretty busy and worked on a few things that we needed to be better. It was cool to put them into action tonight.

Can you elaborate on those things? Is it bike stuff or physical stuff?

Just bits and pieces, like little technique things and stuff like that. Weaknesses like whoops and a few other things. We did work on the bike, so I feel like we got a few percent better all around.

You were not expected to race in 250SX West this season, so did the break give you a chance to get into the motorcycle a bit more and find things away from the pressure?

Yes and no. It was good because we had Jett [Lawrence] racing. We found some more stuff, like a few engine things. I overjumped everything on press day, by like five or ten metres, because it was way faster than my practice bike, so that was good! We just learnt some things off of what they found with Jett.

It seemed like you negated Christian’s strength tonight by picking up the speed in the whoops.

We were grafting all day, to be honest with you. We were chasing the bike and the track in every session. We were making sessions in every session. I was a little bit nervous… Not nervous, but we were making a decision and not knowing what it would do. I was a little nervous not knowing the outcome. I had to have a lot of faith in the team – we all worked really well and felt very good for the night show.

Did you see him use the right side of the whoops at all? Did you know that was where he was making up all of that time on you?

No, I did not. I just knew that my line was not the best. I knew how it would react to my bike though. It may not have been the fastest, but I was just thinking that if it is the most consistent line then it would be my way through there.

You are obviously older now and have more experience, but in what ways are you better now than when you were winning MX2 races?

I mean, it is obviously a whole different ball game over here. My experience in supercross is not crazy. I have only done seventeen main events! I am still just learning and trying to, you know, better myself at every race. It is honestly just about trying to build and be better to become a better rider in the future, which is the end goal. It is not to be in the 250SX class. This is not focusing on everything to be a 250F guy. Everything is for the future.

You just had a five-week break, which is odd, and now there is another three-week break before Atlanta. What do the next couple of weeks look like, with Lucas Oil Pro Motocross coming up?

You try to throw some outdoor days in there. Atlanta is coming up, but you definitely do a little more outdoors. It is not like you just sweep supercross underneath the carpet though.