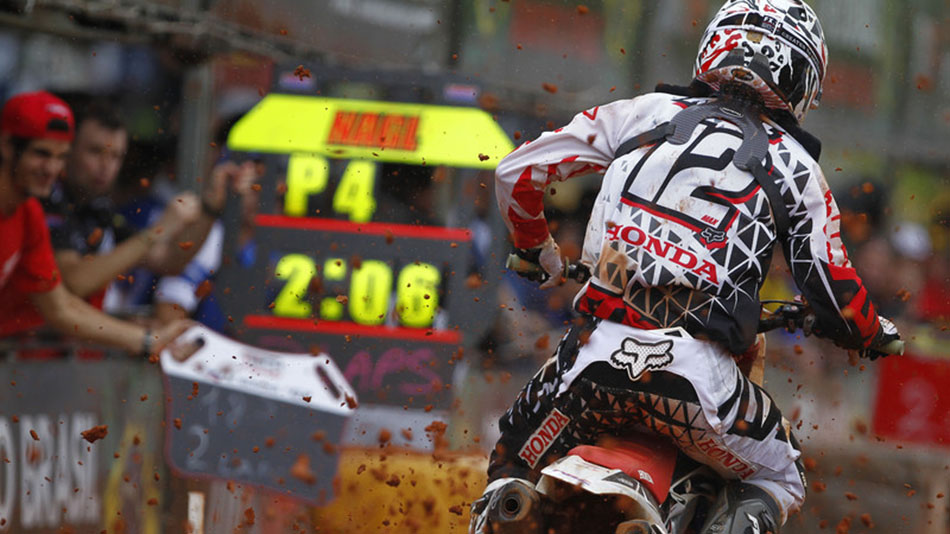 It wasn’t quite thunderstorms today at the MXGP of Brazil, but rain did play a part in two races, making the Beto Carrero track sticky and deeply rutted and catching yet more riders out.

In race one Max Nagl rode well on his CRF450RW, closing in on a podium position throughout but ultimately crossing the line in fourth. Evgeny Bobryshev delivered a performance that surprised the team just two weeks after his ankle operation, running as high as second by the second corner after a great start and ultimately finishing just behind Max in fifth/

Race two was a mixed affair though, as although Max ran smoothly to finish fifth, Bobby crashed out of sixth on the second lap, falling foul of the conditions and an ankle that was sore after race one. Taking a hit to his ankle in the crash, thereafter he rode to limit any further damage and avoid compromising his on-going healing period.

There is now a gap of two weeks until the next race, the MXGP of Trentino on 13 April, during which time the team will be busy with a mid-season test and Bobby will make more scheduled visits to check on the healing of his ankle.

Max Nagl, #12: “I was happy with my riding; I was smooth and had a good tactic when passing other but physically, I don’t know why but for me it was harder than Thailand. It was a strange heat today – it was hard for me to last in the race so I had to slow down to not destroy my body. I had two times a top five result – it’s ok but for sure we are pushing for the podium every time. In part it was down to the starts because if you’re not with the group then you have no chance, and also it was tough for me today so this is why it wasn’t possible to get on the podium. For Arco we’re pushing even more to find a solution to the starts because you need to be up front there. Especially the first five guys, they’re gone and there is no chance to catch them in the race, so we will work to improve in this area.”

Evgeny Bobryshev, #777: “In the second race, I crashed on the second lap. I just slide in the corner and went off the track. I went over the top of the berm so I just lost the front. When I crashed, Max was right behind me so he had no chance to move so he hit my bad ankle, so then I had really a lot of pain. I tried to come back but then I hit it again and then I stalled the bike. I’m really disappointed with zero points in the second race. It’s really frustrating. But looking forward, I go to see the doctor about my ankle again to check it after this weekend and check the healing, and then we decide my training before Arco.”

Keisuke Inomoto, Team HRC Team Principal: “Overall this weekend has not been so good for us, but there are positives we can take. Bobby is continuing the recovery with his ankle, despite the pain he had today, and with another two weeks until the next race he’ll be in a better position then. Max is showing again he’s very consistent with a good tactical ride in race two which is important for his championship. Now we go to Europe for this first time this season, but before that we have a test where we will work to continue to improve certain areas of the bike.”

Roger Harvey, HRC General Manager – MXGP: “Max was pretty strong in both races, but like he said he had to play a tactical one in the last race from an energy point of view, but in general, not a bad day for Max at all. With Bobby, it’s quite phenomenal what he did in the first race to ride with that pace just two weeks after his operation which, let’s not forget, usually takes six weeks to recover from fully. Second race, he was more tired after the first race so the knocks to his ankle had more effect, but I don’t think he’s done any more damage which is the main thing. He’s now got a couple of weeks to continue his recovery and start building back up his training. Between now and the next Grand Prix in Italy we’ve got a test planned with a number of things we want to try with the bikes ahead of the European part of the season.”