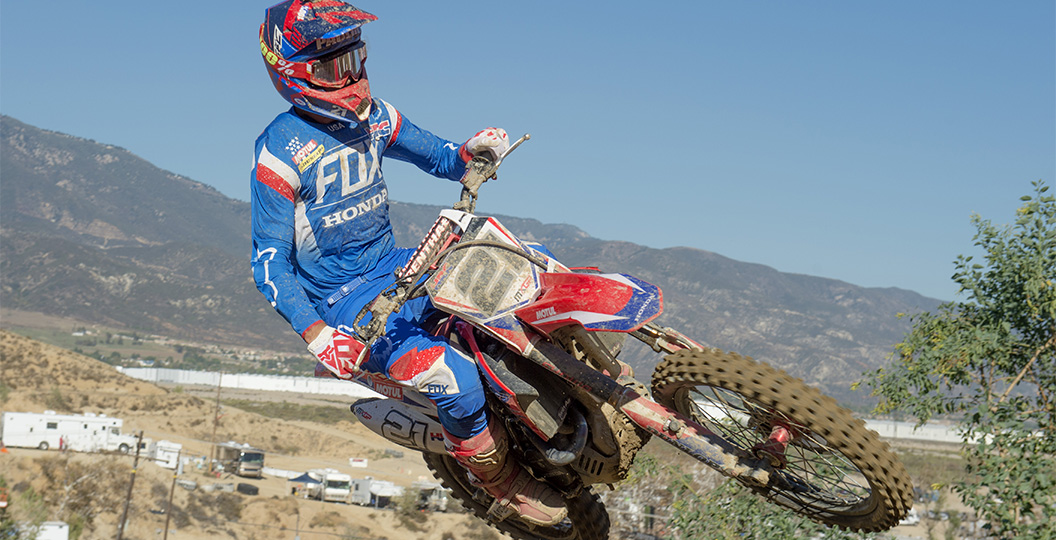 Just one week after the finale of the MXGP season, Gautier Paulin and Evgeny Bobryshev will both be back out in action in Ernee, France, representing Honda, HRC and their countries.

The Motocross of Nations selects the best three riders from each participating country for a head-to-head of national pride, and Paulin is once again representing Team France and Bobryshev Team Russia.

For Paulin, it will be something of an extraordinary homecoming. With Team France, he won the Nations last year when it was held in Latvia, so returns holding the number one plate. He also finished second in the MXGP World Championship, so will be met with a hero’s welcome by his home fans.

Bobby also returns to duty with Team Russia having enjoyed his best ever MXGP season, finishing third in the world.

Both riders will be taking to the track on their factory Honda CRF450RW machines – the same that have taken the duo to a combined nine World Championship podiums in 2015.

Action on track gets underway on Saturday 26 September for practice and qualifying, and the gates drop for the three races on Sunday.

Roger Harvey: “We go straight from America to France for the Nations after a good MXGP season, so we’ll be hoping for both Gautier and Bobby to carry their second and third with them into Ernee. It’s a strange event, the Nations, because you want your riders to do well but also your country, and it also puts far more emphasis on teamwork and on your teammates. Gautier won the event with France last year so he’ll be a star, and the French team will also be strong but they’ll have pressure to perform at home. Bobby should go well, but like I say it’s also so much about teammates and everyone having a consistently strong weekend.”

Gautier Paulin: “It feels great – everyone talks to me about this event, and I’m loving it. I think everyone in motocross loves the Nations – it’s such a special race. The team is strong again this year, and for sure it’s special to be racing in front of home fans in France. It’s a gamble to take the place on the qualifying race, and then from there you need to build your race. Then there is three times change in the races, but also three times the risk because we’re racing motocross so we know that anything can happen. I’m definitely looking forward to it and I think it will be a really great event. After finishing second in the World Championship, I’m looking forward to seeing all the home fans again.”

Evgeny Bobryshev: “The Nations is special because it’s three of the best riders from each country and when they choose you it’s a great feeling. It’s one event in the year where all the best riders come out to battle, so you feel very proud to represent your country. They changed the track a lot so this time it looks like it will suit me in Ernee. It will be a bit tough coming straight back from the US because of the jetlag, and normally you need a few days to recover, but now we will ride once in the week to get ready and then get straight back into racing again.”