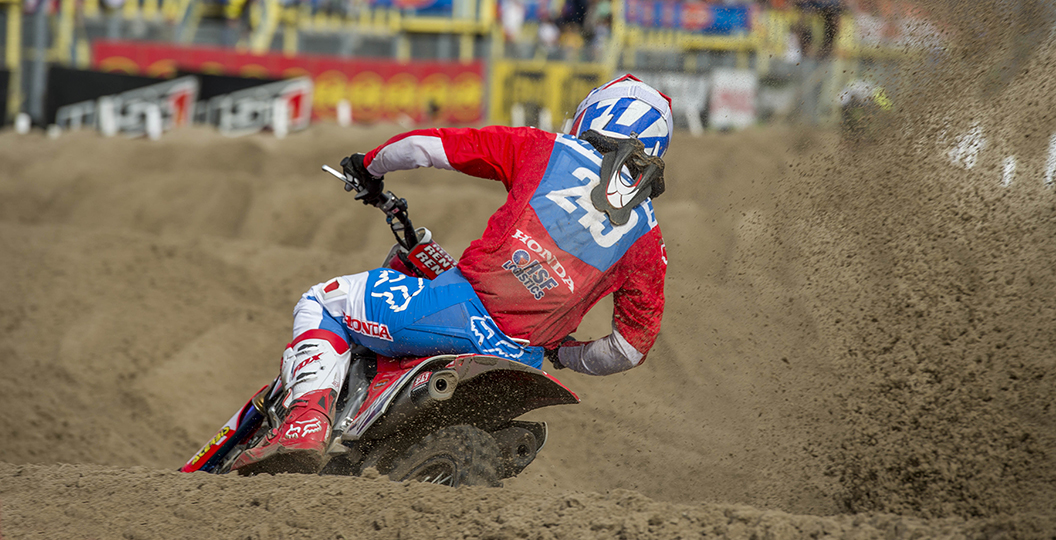 The FIM Motocross World Championship is going to conclude on Italian soil this weekend, as round twenty of the current campaign is going to take place at Imola. The respective title fights are effectively over now, which is a little disappointing, but there are still some fights to watch in both classes. There are medals and bonuses on the line this weekend!

The battle for third in the premier division, between Clement Desalle and Tim Gajser, is not wide open, but things could potentially change. There are twenty points between those riders and it is rare for there to be such a significant swing in the points on a single weekend. The weather is going to be great as well, so that obviously eliminates the potential for there to be crazy weather and skewed results. Gajser is not going to sweep both of the motos, it just will not happen, but he could take forty points at the Grand Prix of Italy. If that is his points haul, he would need Desalle to acquire a pair of elevenths in order to have a bronze medal. It is a stretch.

Does third in the points actually mean something to these riders? There are almost certainly some bonuses on the line, so that would add to the lure of the position, and it would mean something on a personal level. Desalle has not finished in the top three in the final standings since 2013, almost unbelievably, so clinching that position would be a statement and silence those who question his motivation as his career winds down now. Gajser, on the other hand, missed the opening round with a jaw injury, so it would be remarkable for him to climb into the top three. It is not exactly what he wants, as a former champion, but it would certainly be a respectable end to a troubled campaign.

Romain Febvre currently occupies fifth in the premier-class standings, not that it really matters. Febvre will skip the Grand Prix of Italy, because of the head injury and broken rib that he sustained at the beginning of the month, so will probably end the term in sixth. Gautier Paulin is three points down and obviously will not have any trouble gaining that ground on the hard-pack surface. Fifth is still going to be a step down for him, especially considering that he was third with the same team twelve months ago, but there is no doubt that he will take that final ranking after such a turbulent campaign. It has arguably been one of his worst.

The most interesting thing here is that Glenn Coldenhoff is just thirty points behind Gautier Paulin. It would obviously take something catastrophic for Coldenhoff to leapfrog Paulin, but the fact that those two riders are locked in a duel to the finale really sums up how rough the term has been for the latter. It is really rare for those two to be mentioned in the same sentence. Remember that Coldenhoff has not exactly set the world alight either, as he has not stood on the box through nineteen rounds. Coldenhoff needs forty-three points to slide past Romain Febvre in the points and would therefore have to acquire a brace of seconds.

It is going to be quite a stretch for Thomas Covington to get around Ben Watson and take fourth in the final standings, because they are separated by twenty points, but it is obviously not impossible. It is very realistic to expect Covington to sweep both motos at the Grand Prix of Italy, so if that happens overcoming Watson suddenly seems possible. There are a lot of things that have to go right in order for things to work out that way though. Covington and Watson are arguably better than their current rankings indicate, as they should both have a shot at a bronze medal. Thomas Kjer Olsen needs to clinch two points to mathematically secure that position.

Thomas Covington has actually had an extremely strong second half. Covington has acquired three hundred and fifty-four points since the eleventh round, whereas Pauls Jonass has had eleven less than that. Thomas Kjer Olsen has had just three hundred and five points in that same period. It honestly seems that Covington deserves more credit than what he has received, because had he been at this level when moto one started six months ago then he would be have a shot at the title. It is just unfortunate that he is now going to return to the United States, so he is not going to have a chance to build on this or take the momentum into another term.